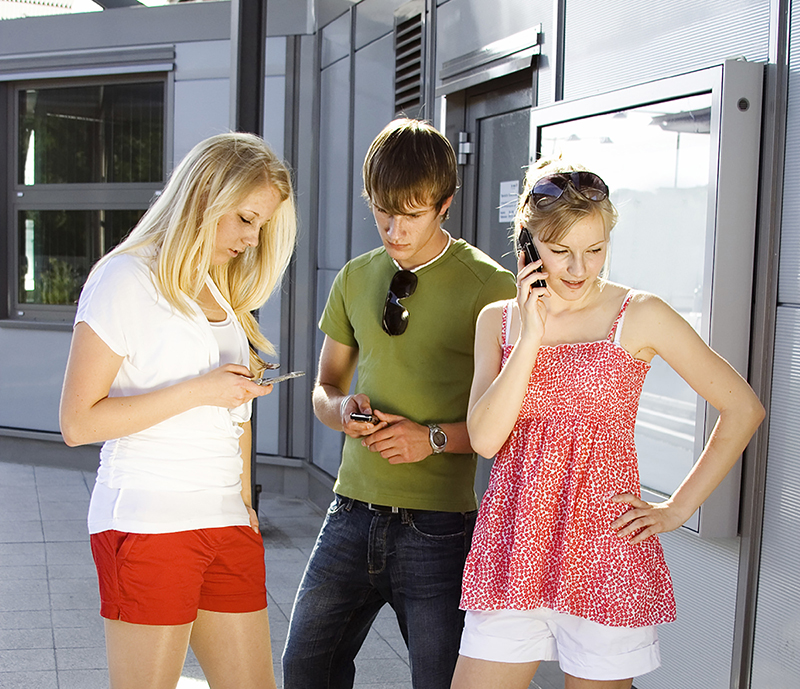 October 8, 2014 – A new study from the University of Utah confirms that substantial numbers of teens are sexting – sending and receiving explicit sexual images via cellphone. Though the behavior is widely studied, the potentially serious consequences of the practice led the researchers to more accurately measure how frequently teens are choosing to put themselves at risk in this fashion.

The study surveyed 1,130 undergraduate students about their experiences sexting in high school. Nearly 20 percent reported they had sent a nude photo of themselves to another via cellphone and 38 percent had received such a picture. Of the number who had received a sext, nearly one in five had forwarded the picture to someone else.

“The results are nearly identical to the findings from our 2013 study of high school students,” said Don Strassberg, professor of psychology at the University of Utah and lead author on both studies. “We believe the consistency reflects a valid estimate of the prevalence of teen sexting – and the numbers are considerable.”

Strassberg points out the risks of using a cellphone to send intimate messages goes well beyond that of sharing say, print photographs as a form of flirting.

“Nothing has changed in that realm – except that the technology makes it easy and thus, more vulnerable to misuse,” he said. “You lose control of the image the moment you push ‘send.’ From there the risks, which can be especially grave for teens, range from embarrassment and humiliation to unwanted sexual advances to cyberbullying and blackmail, and though rare, possibly to felony charges for pornography trafficking because they are minors.”

According to Strassberg, the results of the two sexting studies from his lab, as well as those from studies conducted across the U.S., demonstrate that sending naked selfies is not limited to former U.S. congressmen or Hollywood starlets, but is going on in high schools across the country and in significant numbers. This behavior continues, despite the potentially serious consequences that can occur when sexting goes wrong.

The research, published online in the journal Computers in Human Behavior, was conducted at the University of Utah over a three-year period. Participants were students enrolled in undergraduate psychology classes and queried about their experiences sexting during high school – after 2007, when it became more commonplace. Though the research was completed at a single, public institution, a quarter of the 1,130 students surveyed attended high school outside Utah, and 7 percent outside the United States, providing a measure of economic and geographic diversity.

In addition, the definition of “sext” used in the study was very specific – sending, receiving and forwarding sexually explicit cellphone photos that reveal genitals of either sex or female breasts. The specificity of the definition and study design were intended to overcome the methodological variety of other previous studies and draw more reliable conclusions about how widespread sexting is.

“Sexting is far from a rare occurrence,” said Strassberg, “and the ability of a recipient to forward on a sext to others can be problematic, especially for young women who share an explicit photo. Because once a sext has been sent, the sender has no control over who, or how many, will eventually see that picture. Other than the adolescent mentality that overestimates benefits over risks, we don’t yet know why teens are choosing to put themselves at risk.”

And although men and women both sext, there are striking differences between the sexes. Equal numbers of men and women reported that they had sent a sext, but significantly more men than women said they had received a sext – 47.1 percent of males versus 32.1 percent of females. That may be in large part because of the participants who had received a sext, men were significantly more likely to have forwarded the picture than were women, 24.2 percent versus 13 percent.

Who gets sexts? Mostly “boyfriend/girlfriends,” although women indicated that as the target 83 percent of the time, while for men it was 55 percent. Men sent sexts to “a friend (not a boyfriend/girlfriend)” 31 percent of the time versus 15 percent for the women in the survey. Strikingly, men said they sexted “someone I wanted to date or hook up with” (12 percent) or “an acquaintance I just met” (2.4 percent), while women did neither. Strassberg concludes that these differences, which are all statistically significant, are consistent with findings that men have more positive attitudes toward casual sex than do women.

Strassberg concludes that there are still a number of important questions about teen sexting that need reliable answers before adults can decide how – or even if – they should respond to the popular phenomenon. Further study is warranted to better understand teen motives, get a clearer sense of their appreciation of possible consequences of sexting and whether sexting increases or decreases initiation of physical sexual interaction, among other issues.

The full study can be found here.