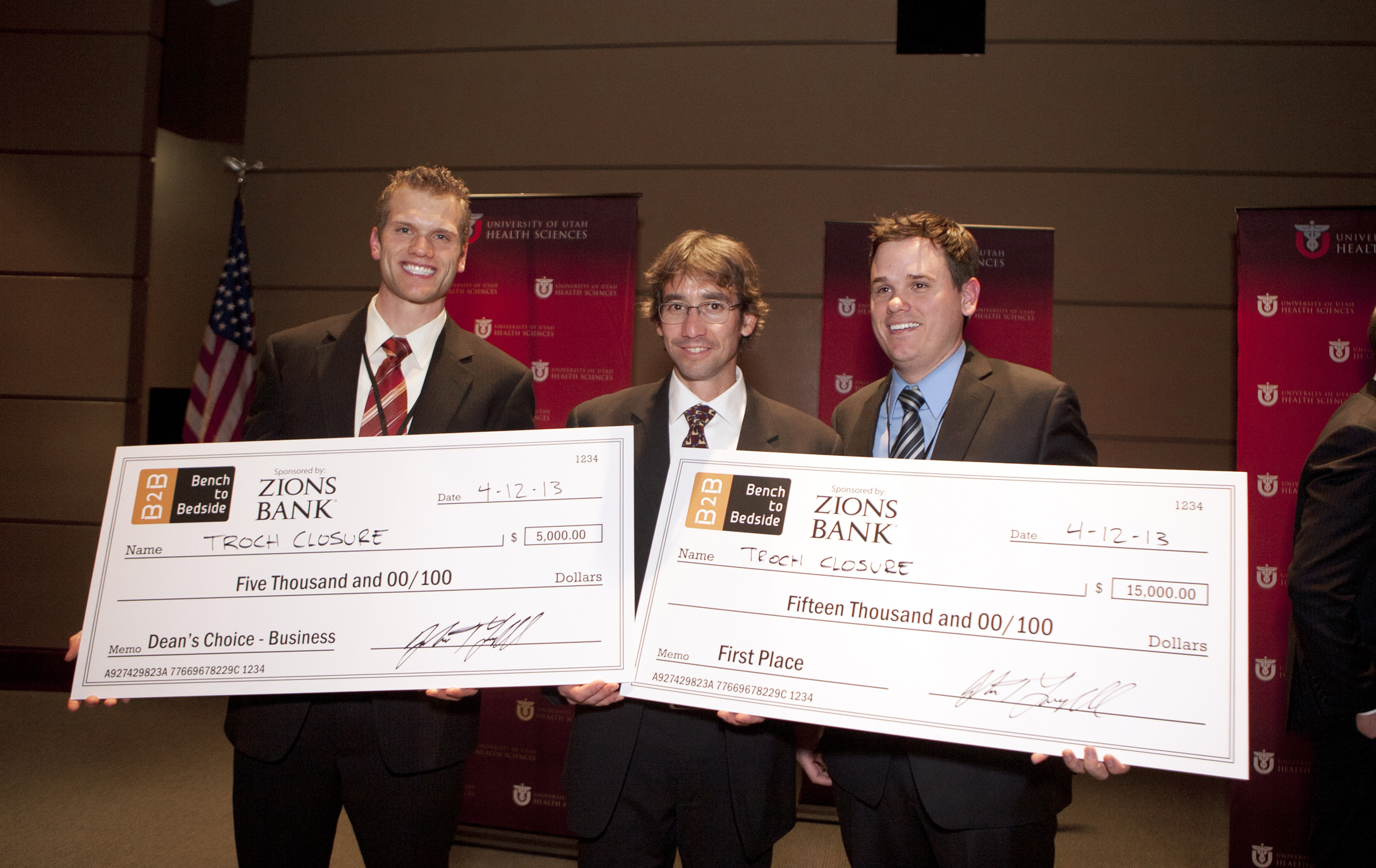 April 17, 2013 — Teddy bears, mechanical leeches, brain drill bits and many more prototypes are not things you would expect to see at a typical student competition. But the annual Bench-2-Bedside competition at the University of Utah is anything but typical.

Bench-2-Bedside is a medical-device prototype and business-plan competition that just concluded its third season. Eighteen teams competed, and the top teams won more than $70,000 in cash and prizes to develop their ideas. Teams consisted of students from across campus – including medical, engineering and business students. Each team begins with only $500 and an idea. In six months, they create a working prototype and solid business plan.

“This program represents a paradigm shift in the way we educate tomorrow’s doctors, engineers and business leaders,” says John Langell, M.D., Ph.D., M.P.H., a surgeon and the director of the U’s Center for Medical Innovation, the parent organization for Bench-2-Bedside. “Instead of learning in a classroom, these students learn by forming interdisciplinary teams that create devices with real potential.”

Team Troclosure won the Grand Prize of $15,000, in addition to the $5,000 prize for Best Business Idea. The team invented a device to help surgeons suture the inside of the hole created when doing laparoscopic surgery. The device simplifies a process that usually requires extra time and equipment when a surgeon works through a small hole to secure a suture inside the abdominal wall. This device would have benefited an estimated 2.5 million patients who received laparoscopic surgery in the U.S. in 2012.

“They actually have something that is ready to license soon,” Langell says. “As a surgeon, this is something I want to use. This is a problem every day.”

Team Troclusure consists of bioengineering students Pablo Johnson, Mike Fogarty and Spencer Madsen. They used the experience to improve their understanding of how medical devices are invented and launched – however, they are also serious about selling their device. The team has already filed a patent, and they are hopeful they can license the technology to an established company.

The team plans to use the $20,000 they won to create a professional prototype – something more refined than the 3D printing they used for the competition – with the ultimate goal of making progress toward animal trials and approval from the Food and Drug Administration.

Other award winners had equally interesting prototypes, such as:

Winning teams use the money to develop their devices, so Bench-2-Bedside is just the beginning for them, and any other team that wants to go beyond the prototype stage.

“Your dream doesn’t have to end here even if you didn’t win a big check,” says Matthew Sorensen, a medical student at the U and president of Bench-2-Bedside.

Bench-2-Bedside is made possible by substantial support from Zions Bank.

University of Utah departments that provide support include the Lassonde Entrepreneur Center and the Technology Venture Development office.