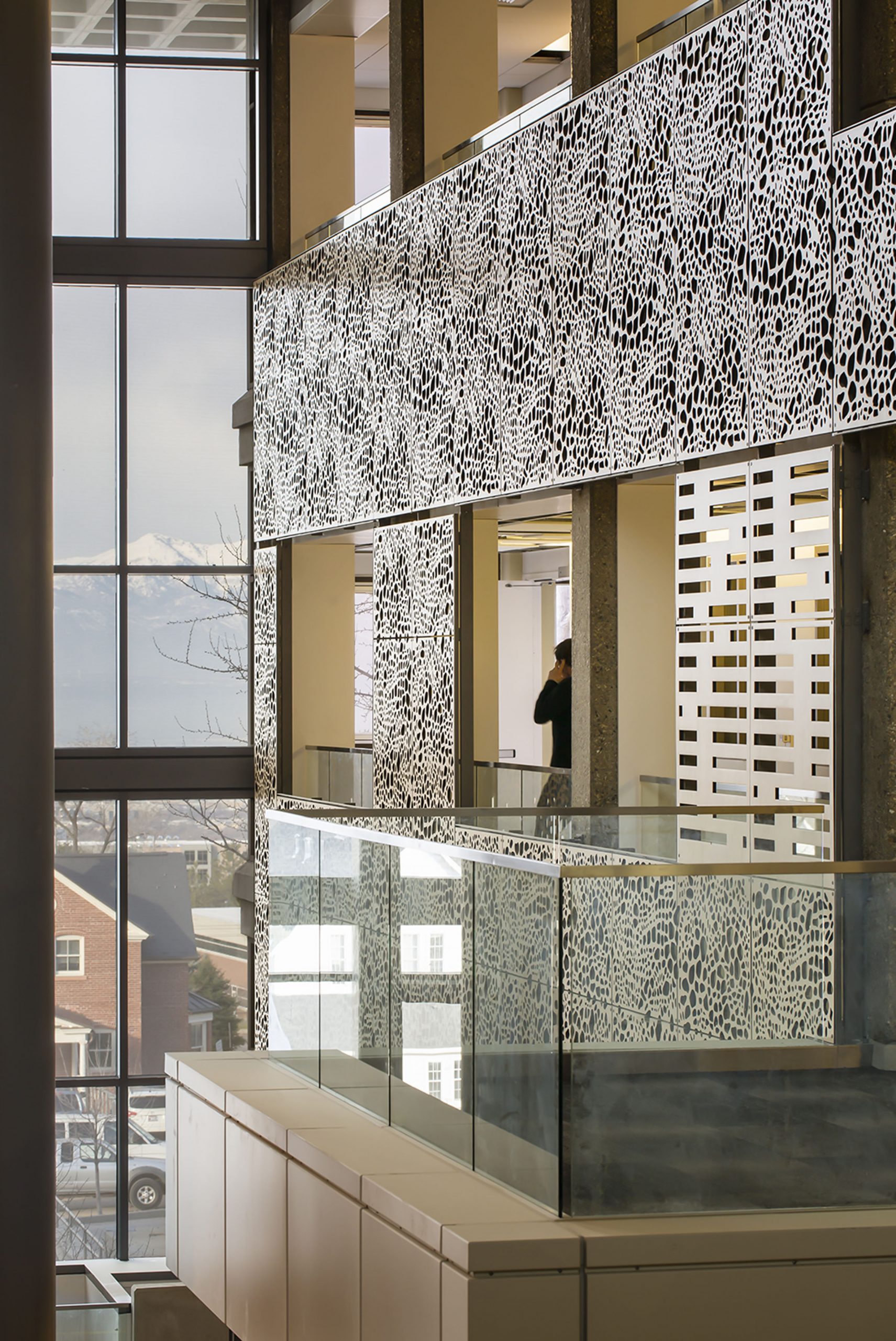 April 16, 2013 – A legacy of giving that began nearly 50 years ago came full circle on Friday, April 12, 2013, with the opening of the L. S. Skaggs Pharmacy Institute at the University of Utah. The new building’s cost exceeds $75 million.

Named in honor of L. S. “Sam” Skaggs, the 150,000-square-foot building stands as a tribute to Skaggs’ dedication to scientific discovery and many years of friendship to the University’s College of Pharmacy. A businessman and philanthropist who revolutionized U.S. shopping habits and led one of the country’s largest food and drugstore chains, American Stores, Skaggs and charitable organizations he created donated more than $50 million to help construct the Institute. Skaggs died on March 21, 2013.

“Sam Skaggs was a true friend to the College of Pharmacy, and donations from him and the ALSAM Foundation were absolutely critical for completing this impressive new building,” says Chris Ireland, dean of pharmacy. “The best way we can repay Mr. Skaggs’ and his family’s generosity is by providing a top-tier pharmacy education and conducting groundbreaking research to discover new drugs to help people suffering from diseases worldwide.”

The new building, designed by architects EDA and NBBJ, fosters an atmosphere of creativity and multidisciplinary collaboration among faculty, students and staff. The laboratories and main hallway, for example, contain recesses with couches and white boards to facilitate spur-of-the-moment meetings and brainstorming sessions among researchers. The laboratories also are configured to allow researchers and staff to easily move around to interact with one another.

The spacious atrium, which serves as the building entryway, connects the new institute with L. S. Skaggs Sr. Hall in a space that provides ample areas for faculty and students to gather and discuss their research in the café or in small lounge areas. The atrium also features an amphitheater for presentations and other college events at its west entrance. Striking design elements such as paneling that depicts the cross-section of a sponge represent research pursued by Ireland and other pharmacy faculty to find potential drug compounds in marine life. A bas-relief of several polo players honors the Skaggs family for the sport they love and the annual polo match fundraiser they sponsor for the College of Pharmacy.

“The most striking aspect of the building is the open space created by the atrium,” Ireland says. “It’s a gathering place for faculty and students that creates those impromptu and serendipitous interactions that drive science.”

The Utah Poison Control Center – which is part of the College of Pharmacy and had worked in smaller, tighter quarters in Research Park – now occupies a secure, state-of-the-art call center and office suite on the fourth floor.

In the early1960s, the university’s pharmacy program was housed in two floors above the women’s gymnasium and needed room to grow. Sam Skaggs in 1964 donated money that helped complete funding to build L. S. Skaggs Hall (now called L. S. Skaggs Sr. Hall), which was named in honor of his father and has been home to the pharmacy college since opening in 1965.

As the college has grown over the years, establishing itself as one of the nation’s top pharmacy schools, the need for more space has forced some faculty and staff into offices and labs in eight buildings across campus. In the early 2000s, Skaggs pledged money to help build a state-of-the-art research facility to bring pharmacy faculty and students under one roof again. The cost of the building will exceed $75 million.

Skaggs’ 1964 donation gave the College of Pharmacy a first-rate facility and helped propel it to become one of the country’s top pharmacy programs. Today, the college is ranked as the 10th best doctorate of pharmacy program in the 2013 US News & World Report graduate school listings. The program also ranks No. 3 in peer-reviewed grants from the National Institutes of Health, receiving nearly $20 million in funding from that agency in 2012. The college has ranked among the top four pharmacy programs in NIH funding since 1975.

Adjoining one another on the University’s health sciences campus, the new L. S. Skaggs Pharmacy Institute and L. S. Skaggs Sr. Hall bring together the old and the new in a fitting tribute to her father and grandfather, according to Claudia Skaggs Luttrell.

“The current and new building in this new Skaggs Pharmacy Institute will stand together, like father and son, honoring these two great Utah businessmen on a campus and in a city they both loved and called home,” she says.