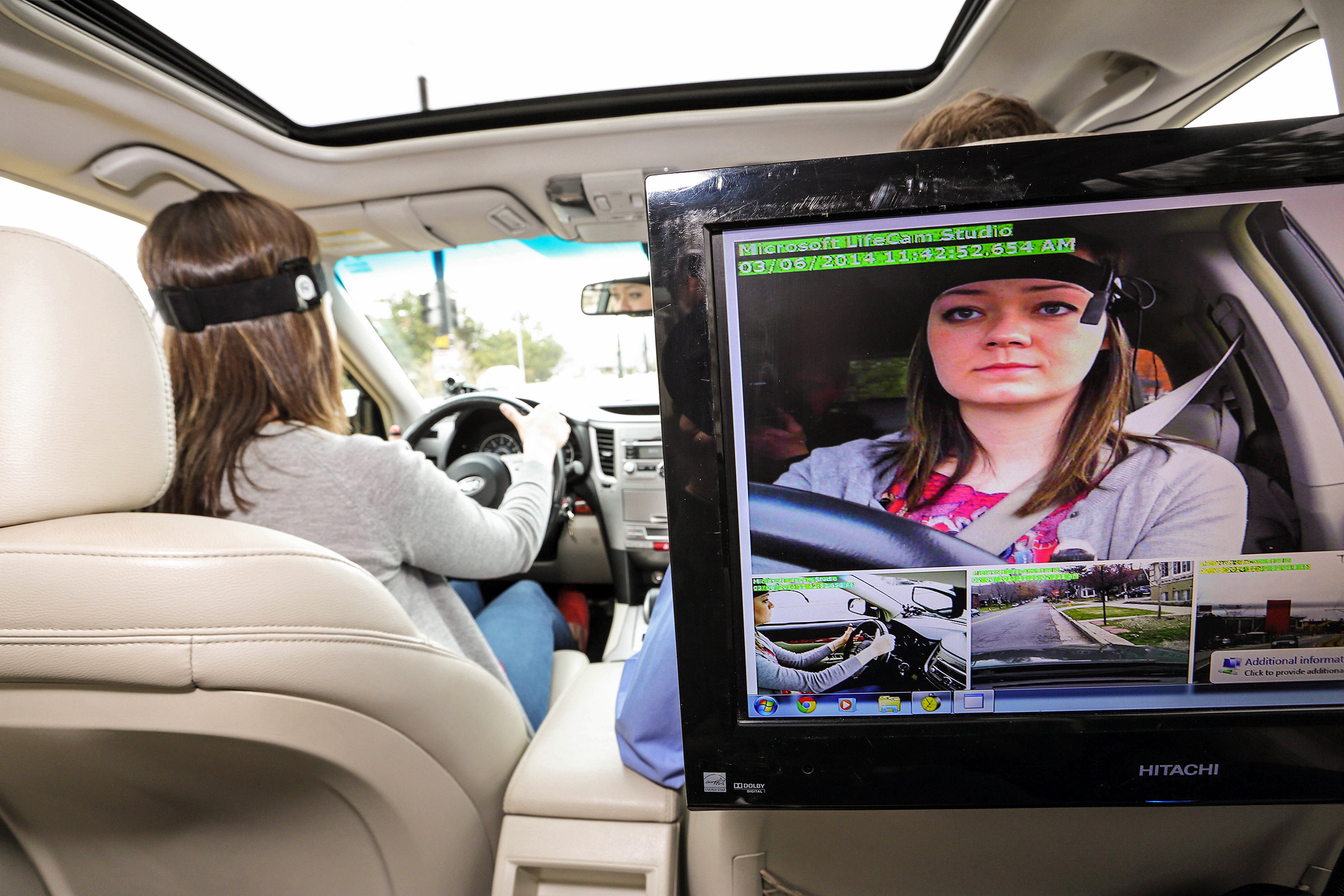 Oct. 7, 2014 – Two new AAA-University of Utah studies show that despite public belief to the contrary, hands-free, voice-controlled automobile infotainment systems can distract drivers, although it is possible to design them to be safer.

“Even though your car may be configured to support social media, texting and phone calls, it doesn’t mean it is safe to do so,” says University of Utah psychology professor and study leader David Strayer. “The primary task should be driving. Things that take your attention away make you a poor driver and make the roads less safe.”
The studies were sponsored by the AAA Foundation for Traffic Safety, an arm of the nonprofit AAA, formerly known as the American Automobile Association.

— One new study found that using your voice to make phone calls and tune the radio with Chevrolet’s MyLink system distracted drivers the most. Mercedes’ COMMAND system, MyFord Touch and Chrysler’s UConnect were better, but all diverted attention more than a cell phone conversation. The least distracting system was Toyota’s Entune, which took as much attention as listening to a book on tape, followed by Hyundai’s Blue Link, which was a bit more distracting, but less than talking with a passenger.

— In the other new study, using Apple iPhone’s Siri to send and receive texts, post to Facebook and Twitter and use a calendar was more distracting than any other voice-activated technology – even when it was modified for use as a hands-free, eyes-free device so drivers kept their hands on the wheel and eyes on the road.

AAA and Strayer urge drivers to minimize use of distracting in-vehicle technology. The new studies provide recommendations to automakers to help make future voice-controlled systems so they are “simpler and more accurate” in responding to voice commands, and thus less distracting, Strayer says.

“We are concerned we may be making distraction problems worse by going to voice-activated technology, especially if it’s not easy to use,” Strayer says. “But the reality is these systems are here to stay. Given that, let’s make the technology as safe as possible with the goal of making it no more distracting than listening to the radio.”

How the New Studies Were Performed

The studies involved 162 University of Utah students and other volunteers who performed a series of tasks (such as calling, texting, tuning the radio) using various voice-based, interactive technologies while they looked at a computer screen, operated a driving simulator and drove real cars on a loop through Salt Lake City’s Avenues district.

In the real cars, drivers were accompanied by at least one researcher responsible for data collection and for safety spotting to prevent them from mishaps such as running stop signs. Video cameras recorded their actions and the road ahead.

The findings follow a 2013 AAA-University of Utah study that showed using hands-free devices to talk, text or send e-mail is distracting and risky for motorists.

The 2013 study established a five-point scale for measuring driver distractions: 1 represents the mental workload of driving without distraction, while 5 represents severe distraction caused when drivers performed a complex math-and-memorization test.

Both of the new studies used the same scale. One new study scored common voice interactions with specific infotainment systems in some of the most common auto brands on U.S. roads. From least distracting to most distracting:
— 1.7 for Toyota’s Entune.
— 2.2 for Hyundai’s Blue Link Telematics System.
— 2.7 for Chrysler’s UConnect System.
— 3.0 for the Ford SYNC with MyFord Touch system.
— 3.1 for Mercedes’ COMMAND system.
— 3.7 for Chevrolet’s MyLink.

The Toyota and Hyundai systems show “these systems can be designed so they aren’t very distracting to drivers,” Strayer says.

Strayer’s tests of Siri allowed drivers – wearing lapel microphones – to interact with Siri as a researcher in the back seat actually manipulated the phone. “We wanted to focus on mental distraction or workload” so there was no additional distraction from looking at or handling an iPhone, Strayer says. He adds that Apple officials told him Siri learns and gets more accurate over time.

“Some of the most advanced technology, such as Siri, can lead to high levels of distraction when you’re trying to drive,” Strayer adds. “When these systems become more complex, like sending text messages or posting to Facebook, it pushes the workloads to pretty high levels and may be dangerous while driving.”

The research revealed that the more distracting voice-based systems were that way because they were too complex, mentally demanding, difficult to use and often inaccurate at recognizing voice commands.

“It was to the point where drivers [in the experiments] were cursing the systems out, especially the ones that were difficult and wouldn’t do what they want,” Strayer says. “If you want to buy one of these cars, make sure you can actually use the voice-based technology before you leave the lot. Some of these systems are very difficult to use.”

He adds: “We need to be smart about how we use this technology. Just because it’s there doesn’t mean we should use it. In some situations, it can be sufficiently distracting that it can impair road safety.”

WASHINGTON, D.C. (Oct. 7, 2014) – With three out of four drivers believing that hands-free technology is safe to use, Americans may be surprised to learn that these popular new vehicle features may actually increase mental distraction, according to new research by the AAA Foundation for Traffic Safety. This research can serve as guidance to manufacturers who increasingly market hands-free systems as safety features. The good news for consumers is that it is possible to design hands-free technologies that are less cognitively distracting, according to the research.

The results, which build on the first phase of the Foundation’s research conducted last year, suggest that developers can improve the safety of their products by making them less complicated, more accurate and generally easier to use – a point AAA hopes to use in working with manufacturers to make hands-free technologies as safe as possible for consumers. While manufacturers continue their efforts to develop and refine systems that reduce distractions, AAA encourages drivers to minimize cognitive distraction by limiting the use of most voice-based technologies.

“We already know that drivers can miss stop signs, pedestrians and other cars while using voice technologies because their minds are not fully focused on the road ahead,” said Bob Darbelnet, chief executive officer of AAA. “We now understand that current shortcomings in these products, intended as safety features, may unintentionally cause greater levels of cognitive distraction.”

Using instrumented test vehicles, heart-rate monitors and other equipment designed to measure reaction times, Dr. David Strayer and researchers from the University of Utah evaluated and ranked common voice-activated interactions based on the level of cognitive distraction generated. The team used a five-category rating system, which they created in 2013, similar to that used for hurricanes. The results show:

The study also separately assessed Apple’s Siri (version iOS 7) using insight obtained from Apple about Siri’s functionality at the time the research was conducted. Researchers used the same metrics to measure a broader range of tasks including using social media, sending texts and updating calendars. The research uncovered that hands- and eyes-free use of Apple’s Siri generated a relatively high category 4 level of mental distraction.

To put all of this year’s findings in context, last year’s research revealed that listening to the radio rated as a category 1 distraction; talking on a hand-held or hands-free cell phone resulted in a category 2 distraction; and using an error-free speech-to-text system to listen to and compose emails or texts was a category 3 distraction.

“Technologies used in the car that rely on voice communications may have unintended consequences that adversely affect road safety,” said Peter Kissinger, President and CEO of the AAA Foundation for Traffic Safety. “The level of distraction and the impact on safety can vary tremendously based on the task or the system the driver is using.”

To assess “real-world” impact, Dr. Joel Cooper with Precision Driving Research evaluated the two most common voice-based interactions in which drivers engage – changing radio stations and voice dialing – with the actual voice-activated systems found in six different automakers’ vehicles. On the five point scale, Toyota’s Entune® system garnered the lowest cognitive distraction ranking (at 1.7), which is similar to listening to an audio book. In comparison, the Chevrolet MyLink® resulted in a high level of cognitive distraction (rating of 3.7). Other systems tested included the Hyundai Blue Link (rating 2.2), the Chrysler Uconnect™ (rating 2.7), Ford SYNC with MyFord Touch® (rating 3.0) and the Mercedes COMAND® (rating 3.1).

“It is clear that not all voice systems are created equal, and today’s imperfect systems can lead to driver distraction,” continued Darbelnet. “AAA is confident that it will be possible to make safer systems in the future.”

This phase of the research highlights the variability in demands across all the systems tested. AAA is calling for developers to address key contributing factors to mental distraction including complexity, accuracy and time on task with the goal of making systems that are no more demanding than listening to the radio or an audiobook. AAA also plans to use the findings to continue a dialogue with policy makers, safety advocates and manufacturers.

To view the full report, “Measuring Cognitive Distraction in the Vehicle II: Assessing In-Vehicle Voice-based Interactive Technologies,” and other materials on distracted driving click here. This study builds upon groundbreaking research conducted last year, which found that drivers can be dangerously distracted even if their eyes are on the road and their hands are on the wheel. AAA promoted the study in the release: Think You Know All About Distracted Driving? Think Again, Says AAA.

Established by AAA in 1947, the AAA Foundation for Traffic Safety is a 501(c)(3) not-for-profit, publicly-supported charitable educational and research organization. Dedicated to saving lives and reducing injuries on our roads, the Foundation’s mission is to prevent crashes and save lives through research and education about traffic safety. The Foundation has funded over 200 research projects designed to discover the causes of traffic crashes, prevent them and minimize injuries when they do occur. Click here for more information on this and other research.

As North America’s largest motoring and leisure travel organization, AAA provides more than 54 million members with travel, insurance, financial and automotive-related services. Since its founding in 1902, the not-for-profit, fully tax-paying AAA has been a leader and advocate for the safety and security of all travelers. AAA clubs can be visited on the Internet.

Links to Videos and Photos

AAA videos about the University of Utah research also are here:

David Strayer will be in Washington, D.C. He is available sporadically and only by cell phone or email Oct. 5-8. Please contact Lee Siegel to obtain Strayer’s cell phone number.

Joel Cooper will be in Salt Lake City for interviews and photo/video ops with a research car, parked near meters at south end of Rice-Eccles Stadium lot. Call him to schedule.