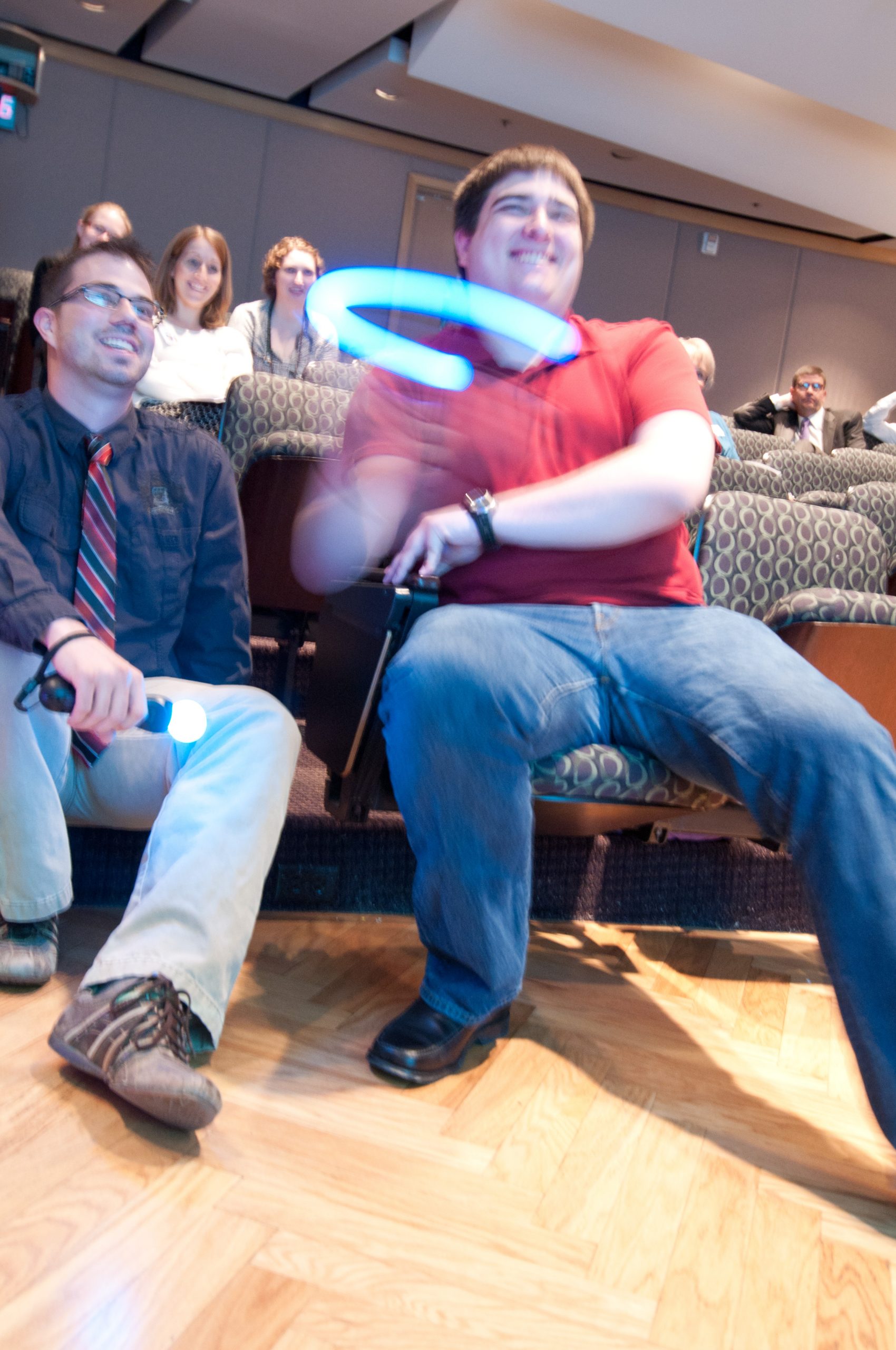 Sept. 26, 2011 – Even super heroes need a chance to get better, especially if they’ve been fighting their arch-nemesis and a robotic crab that just won’t go away. At least, that’s the premise behind a video game developed at the University of Utah to help children with cancer during their treatment.

In an exciting collaboration between the University of Utah’s Entertainment Arts and  Engineering (EAE) program, the university’s departments of pediatrics and medicinal chemistry and Primary Children’s Medical Center, a team of professors and graduate students have created a game that is expected to increase patients’ physical strength and give them a sense of empowerment to help their mental state while fighting their disease. On Friday, Sept. 23, the game was unveiled for use at Primary Children’s Medical Center.

It started when Grzegorz Bulaj, an associate professor of medicinal chemistry at the University of Utah, met an eight-year-old boy with an extraordinary spirit who had been diagnosed with a brain tumor. During hospital visits, Bulaj noticed a contraption called an incentive spirometer, a plastic tube in which a patient exhales and raises a ball (the incentive) as high as he can in order to encourage deep breaths and guard against pneumonia.

As primitive as it may seem, Bulaj realized this spirometer is nothing more than a game that encourages activity to help healing. He contacted a colleague, hematologist-oncologist Carol Bruggers, who works in pediatric oncology at Primary Children’s Medical Center, located next to the university and its teaching and research hospital.

Bruggers and Bulaj discussed the merits of developing another type of game for patients.

“After talking to Carol,” Bulaj explains, “the idea was defined like this: We activate the circuits in the brain that connect the part responsible for keeping us highly motivated to the part that contains motor activity.” Through associating physical activity with motivational stimuli, Bulaj says, “a new circuit of positive impulses would then be developed that would make patients feel stronger as they fight an illness. Possibly more important, they’ll have fun doing it.”

Bruggers next did some research on the concept of “patient empowerment,” which psychologists describe as a “locus of control” from within. It is the idea that a patient feels they can change the seemingly impossible. She found statistics in which stroke patients made significant progress in physical therapy focused on patient empowerment techniques.

“Patients who are more empowered are presumably more likely to be willing to fight their disease and maintain their treatment for a longer period of time,” Bruggers explains.

She notes that when treating cancer patients, hope is a major factor. She is optimistic that this project will stave off that sense of hopelessness she sees all too often in her daily interactions with patients.

“You know, this project was very exciting for me,” says Bruggers, “because I have a chance to be part of making something useful and fun for kids that will potentially help a lot of people.”

In a moment that now seems serendipitous, Bruggers read about EAE, a nationally ranked program jointly owned by the Department of Film and Media Arts and the School of Computing, that teaches students how to make video games at the University of Utah.

“EAE is designed to challenge students and present them with real-world opportunities. This project fit the bill perfectly,” says Roger Altizer of what is now being called the PE Interactive Video Game. PE stands for patient empowerment, and also connotes the physical aspect of the game’s design. Altizer, who came up with the game design, is the director of game design and production for the EAE program.

Altizer, with other EAE faculty Robert Kessler and Craig Caldwell, gathered a team of five graduate students to develop the game. Bruggers requested specific criteria for the project catering to the needs of children undergoing cancer treatment.

Bruggers’ criteria may have seemed unusual, or even incongruous, for a video game. Among them was the requirement that the player must be able to battle and grow stronger without experiencing any violence, killing, death or gory graphics.

“The students did an amazing job of reconciling battle with healing, and fighting with positivity,” Bruggers says.

The graduate students – Laura Warner, Kurt Coppersmith, Brandon Davies, Wade Paterson and Jordan Wilcken – worked over the summer to create a five-level multi-player game. It comes complete with original music, characters and graphics and is portable so it can be used in a hospital room.

Created with Microsoft XNA and played using Move Controllers on the Sony PlayStation 3, the game utilizes motion-control technology, but does not require a lot of space to do so. EAE was given access to the beta version of Sony’s Move.me program to develop the game. In addition, the system does not interfere with the frequency of hospital monitors as some motion-controlled systems have been found to do.

In creating the game, it was important that the students understand the needs of pediatric cancer patients. They spent an extensive amount of time with Bruggers and Bulaj, as well as with a physical therapist and social workers from Primary Children’s Medical Center. From these meetings, the students were able to discern characteristics that would be important to the healing process.

“Something subtle, yet extremely important to the game is the use of metaphor and imagery,” notes Altizer. He says that the main character – a super hero who is exhausted from fighting his arch nemesis – gets more vibrant and bigger as he progresses through the levels of the game.

“It is our goal that the patient will relate to the super hero, as they play more, he gets stronger,” Altizer says. He also notes that no living thing in the game is hurt or killed. The super hero always wins and the characters he fights are robotic, not even meant to represent real crabs or whales.

Metaphors abound in the game, and Bruggers and Bulaj are especially fond of a level where a retaining wall must be built to guard inhabitants of an island from a tsunami. All players in the game use movement controllers to spread mortar and stack bricks together. The wall is designed to represent a patient working with their team of caregivers to build their immune system.

The physical activity of the game gets progressively more challenging as the player advances through levels. While the student developers were mindful that cancer patients can be weak and/or have limited mobility, it was important to progress in order to increase endurance and physical characteristics like heart rate and oxygen intake.

Bruggers expects to be able to watch how patients and their families interact with the game and collect data on patients’ progress.

A SMALL STEP TOWARD BIG REWARDS

All of the parties involved in the game’s development expect only bigger and better things to come from this first small step.

Bruggers, Bulaj, Altizer, Caldwell and Kessler have elicited the help of another University of Utah entity to help future development of the game.

The Pierre Lassonde Entrepreneur Center has assigned this project to a team of graduate students who will research and create a strategy for putting the PE Game into the hands of other hospitals and caregivers. That could be through a number of different market opportunities, including a non-profit unit associated with the university.

Lassonde Center director Troy d’Ambrosio is confident that the best model for this project will come out of his students’ creativity and thorough examination. “This is another great learning experience for university students, and a great example of the practical application our program enables. This is a creative and tangible exercise that challenges our students.”

Much like EAE, the Lassonde Center has found a way for students to work on real-world challenges presented by this project. D’Ambrosio notes, “This is not a simple equation to solve, but most things in the world are complicated.”

Both Bruggers and Bulaj express their delight at how far their “simple” idea has come over a span of less than a year.

“I can’t believe we started talking about this in January, and by September we were able to actually deliver the product to Charlie and patients of Primary Children’s Medical Center to play,” Bulaj says. “This is the kind of difference we can make at a world-class research university. It has been a perfect example of the university’s three-pronged mission of research, education and service.”