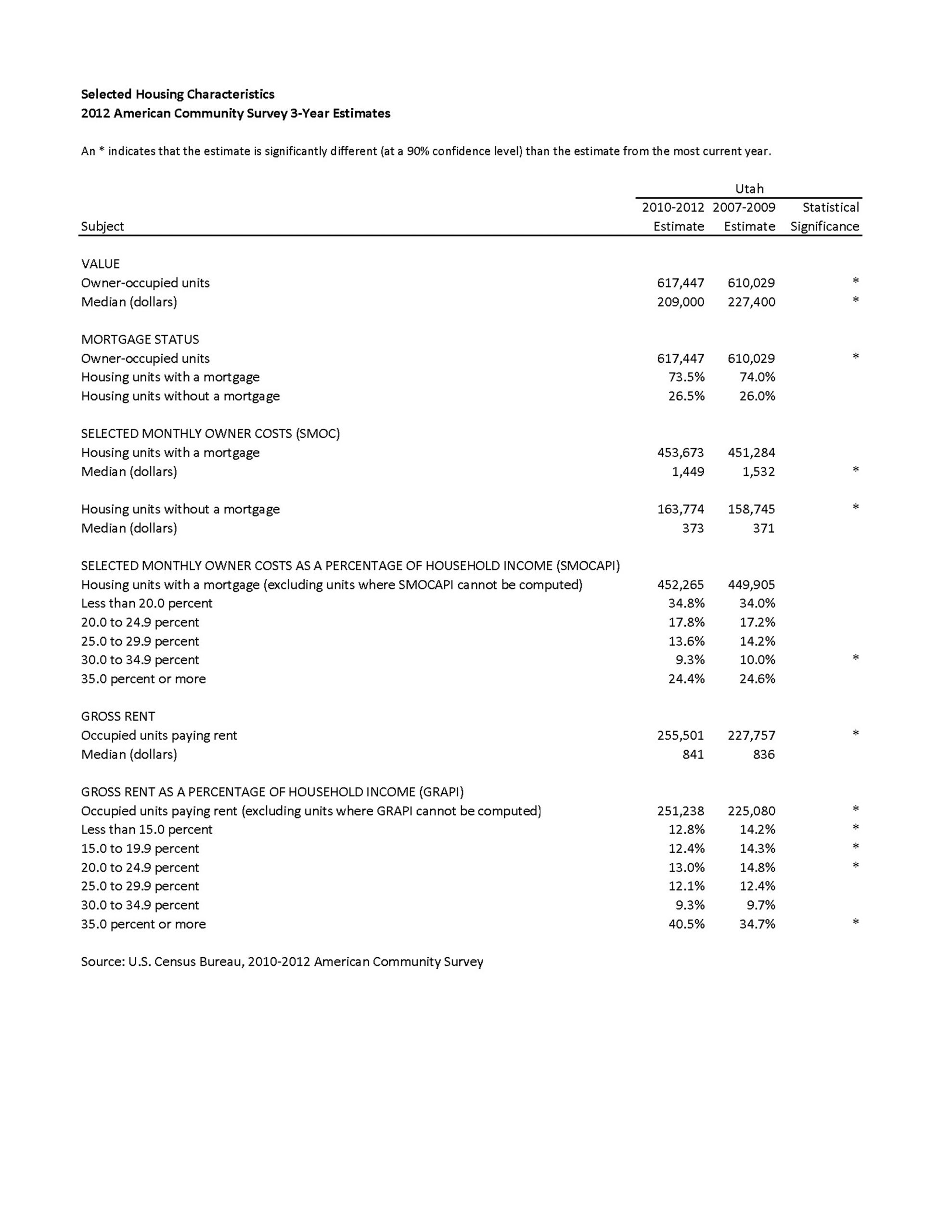 Nov. 14, 2013—The U.S. Census Bureau today released the latest statistics from the American Community Survey, which cover a three-year period from 2010-2012 and are available for areas with a population of 20,000 or more. According to an analysis conducted by the Utah State Data Center, a division of the Bureau of Economic and Business Research within the David Eccles School of Business at the University of Utah, the median home value for Utah was $209,000 during the post-recession period of 2010-2012, a decrease from $227,400 during the recession period of 2007-2009.  The survey also showed a post-recession median home ownership rate of 69.7 percent, a decrease from 71.8 percent during the recession.

The American Community Survey, an ongoing Census Bureau survey that samples a small percentage of the population every year, provides a wide range of important statistics about all communities in the country. The American Community Survey gives communities the current information they need to plan investments and services. Retailers, homebuilders, police departments and town and city planners are among the many private- and public-sector decision makers who count on these annual results. Ever since Thomas Jefferson directed the first census in 1790, the census has collected detailed characteristics about our nation’s people.

The Utah State Data Center, or SDC, Program is one of the Census Bureau’s longest and most successful partnerships. Since 1982, the Utah SDC was housed in the Governor’s Office of Management and Budget. As of November 1, 2013 the Utah State Data Center has a new home in the Bureau of Economic and Business Research, or BEBR, at the University of Utah. Effie Johnson has served as a Utah SDC contact since 2004 and the coordinator since 2009. Johnson will continue to serve as the coordinator of the Utah State Data Center at BEBR. The Utah SDC can help interested data users navigate the Census Bureau’s website to access the data they need to be informed about their community.

Other selected highlights for the Utah area:

“The two most striking statistics in the recent Census release are the decline in the rate of homeownership and the increase in housing cost burden for renters,” said Jim Wood, director of the BEBR. “The seemingly small drop in homeownership rates from 71.8 percent to 69.7 percent amounts to 13,000 fewer homeowners in the state.  Many of these displaced homeowners ended up as renters. And for renters, economic conditions worsened as the job market deteriorated.  Although rental rates were steady, the cost burden for renters increased as the income of renters declined. The recent data show that 40.5 percent of renters spent 35 percent or more of their household income on rent. Prior to the recession, the percent of renters spending 35 percent or more of their income on rent was 34.7 percent.  With 260,000 renter households statewide, this shift results in about 15,000 additional households facing a cost burden of at least 35 percent.”

The Census Bureau has also released a brief titled “Home Value and Homeownership Rates: Recession and Post-Recession Comparisons from 2007-2009 to 2010-2012.” This brief uses the 2010-2012 American Community Survey statistics to focus on small areas’ homeownership rates and median housing values.

In addition to these housing statistics, more than 40 topics about Utah are available with today’s release through the American Community Survey. The topics include educational attainment, employment, commuting, language spoken at home, nativity and ancestry. For the first time, comparison profiles are available for the three-year statistics, allowing smaller communities to see how their social, economic and housing characteristics have changed over time.

The 2010-2012 American Community Survey statistics are available for the nation, all 50 states, the District of Columbia, Puerto Rico, every congressional district, every metro area, and all counties and places with populations of 20,000 or more. Statistics for areas with smaller populations will be available on Dec. 17.