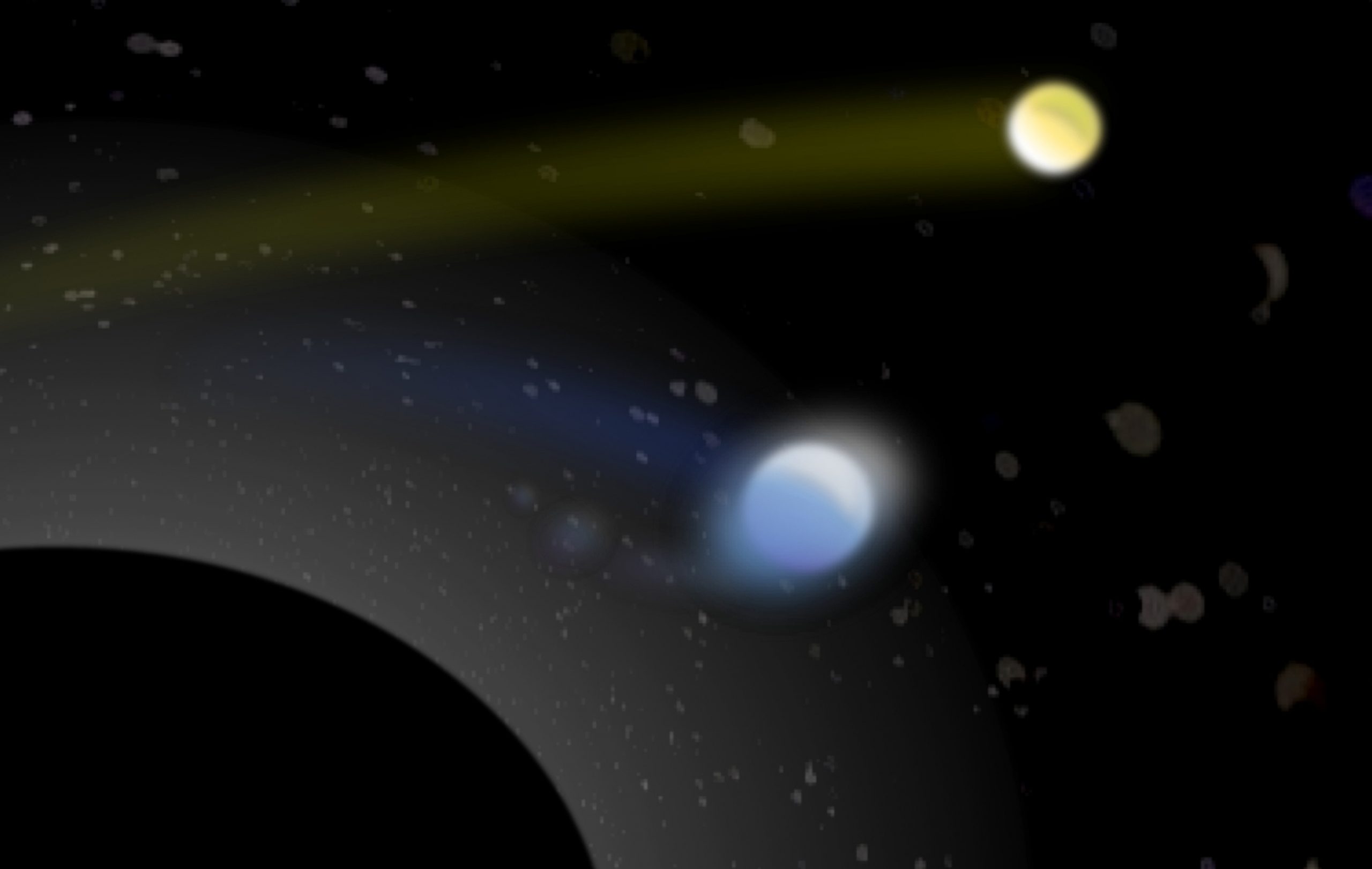 April 2, 2012 – A study led by a University of Utah astrophysicist found a new explanation for the growth of supermassive black holes in the center of most galaxies: they repeatedly capture and swallow single stars from pairs of stars that wander too close.

Using new calculations and previous observations of our own Milky Way and other galaxies, “we found black holes grow enormously as a result of sucking in captured binary star partners,” says physics and astronomy Professor Ben Bromley, lead author of the study, which is set for online publication April 2 in Astrophysical Journal Letters.

“Our mechanism is an efficient way to bring a star to a black hole,” Bromley says. “It’s really hard to target a single star at a black hole. It’s a lot easier to throw a binary at it,” just as it’s more difficult to hit a target using a slingshot, which hurls a single stone, than with a bola, which hurls two weights connected by a cord.

A binary pair of stars orbiting each other “is essentially a single object much bigger than the size of the individual stars, so it is going to interact with the black hole more efficiently,” he explains. “The binary doesn’t have to get nearly as close for one of the stars to get ripped away and captured.”

But to prove the theory will require more powerful telescopes to find three key signs: large numbers of small stars captured near supermassive black holes, more observations of stars being “shredded” by gravity from black holes, and large numbers of “hypervelocity stars” that are flung from galaxies at more than 1 million mph when their binary partners are captured.

Bromley, a University of Utah astrophysicist, did the study with astronomers Scott Kenyon, Margaret Geller and Warren Brown, all of the Smithsonian Astrophysical Observatory in Cambridge, Mass. The study was funded by both institutions.

What Does a Supermassive Black Hole Eat: Gas or Stars?

Black holes are objects in space so dense that not even light can escape their gravity, although powerful jets of light and energy can be emitted from a black hole’s vicinity as gas and stars are sucked into it.

Small black holes result from the collapse of individual stars. But the centers of most galaxies, including our own Milky Way, are occupied by what are popularly known as “supermassive” black holes that contain mass ranging from 1 million to 10 billion stars the size of our sun.

Astrophysicists long have debated how supermassive black holes grew during the 14 billion years since the universe began in a great expansion of matter and energy named the Big Bang. One side believes black holes grow larger mainly by sucking in vast amounts of gas; the other side says they grow primarily by capturing and sucking in stars.

Just last month, other researchers published a theory that a black hole sucks in “food” by tipping its “plates” – two tilted gas disks colliding as they orbit the black hole – in a way that makes the speeding gas slow down so the black hole can swallow it.

Bromley says that theory overcomes a key problem: gas flows into black holes inefficiently. “But are misaligned gas disks common enough to be important for black hole growth?” he asks. “It’s fair to say that gas contributes to the growth of black holes, but it is still uncertain how.”

The new theory about binary stars – a pair of stars that orbit each other – arose from Bromley’s earlier research to explain hypervelocity stars, which have been observed leaving our Milky Way galaxy at speeds ranging from 1.1 million to 1.8 million mph, compared with the roughly 350,000 mph speed of most stars.

Munching Binaries: One is Captured, One Speeds Away

“The hypervelocity stars we see come from binary stars that stray close to the galaxy’s massive black hole,” he says. “The hole peels off one binary partner, while the other partner – the hypervelocity star – gets flung out in a gravitational slingshot.”

“We put the numbers together for observed hypervelocity stars and other evidence, and found that the rate of binary encounters [with our galaxy’s supermassive black hole] would mean most of the mass of the galaxy’s black hole came from binary stars,” Bromley says. “We estimated these interactions for supermassive black holes in other galaxies and found that they too can grow to billions of solar masses in this way.”

As many as half of all stars are in binary pairs, so they are plentiful in the Milky Way and other galaxies, he adds. But the study assumed conservatively that only 10 percent of stars exist in binary pairs.

The new study looked at each step in the process of a supermassive black hole eating binary stars, and calculated what would be required for the process to work in terms of the rates at which hypervelocity stars are produced, binary partners are captured, the captured stars are bound to the black hole in elongated orbits and then sucked into it.

The scientists then compared the results with actual observations of supermassive black holes, stars clustering near them and “tidal disruption events” in which black holes in other galaxies are seen to shred stars while pulling them into the hole.

“It fits together, and it works,” Bromley says. “When we look at observations of how stars are accumulating in our galactic center, it’s clear that much of the mass of the black hole likely came from binary stars that were torn apart.”

When the researchers considered the number of stars near the Milky Way’s center, their speed and the odds they will encounter the supermassive black hole, they estimated that one binary star will be torn apart every 1,000 years by the hole’s gravity.

“We found a wide range of black hole masses can be explained by this process,” Bromley says.

Confirmation of the theory must await more powerful orbiting and ground-based telescopes. To confirm the theory, such telescopes should find many more stars in the cluster near the Milky Way’s supermassive black hole (we now see only the brightest ones), a certain rate of hypervelocity stars in southern skies, and more observations of stars being shredded in other galaxies.

The full study is available on the arXiv preprint server at:
http://arxiv.org/abs/1203.6685

The study will be published online by late April 2 by Astrophysical Journal Letters, but only the abstract may be available to nonsubscribers:
http://iopscience.iop.org/2041-820