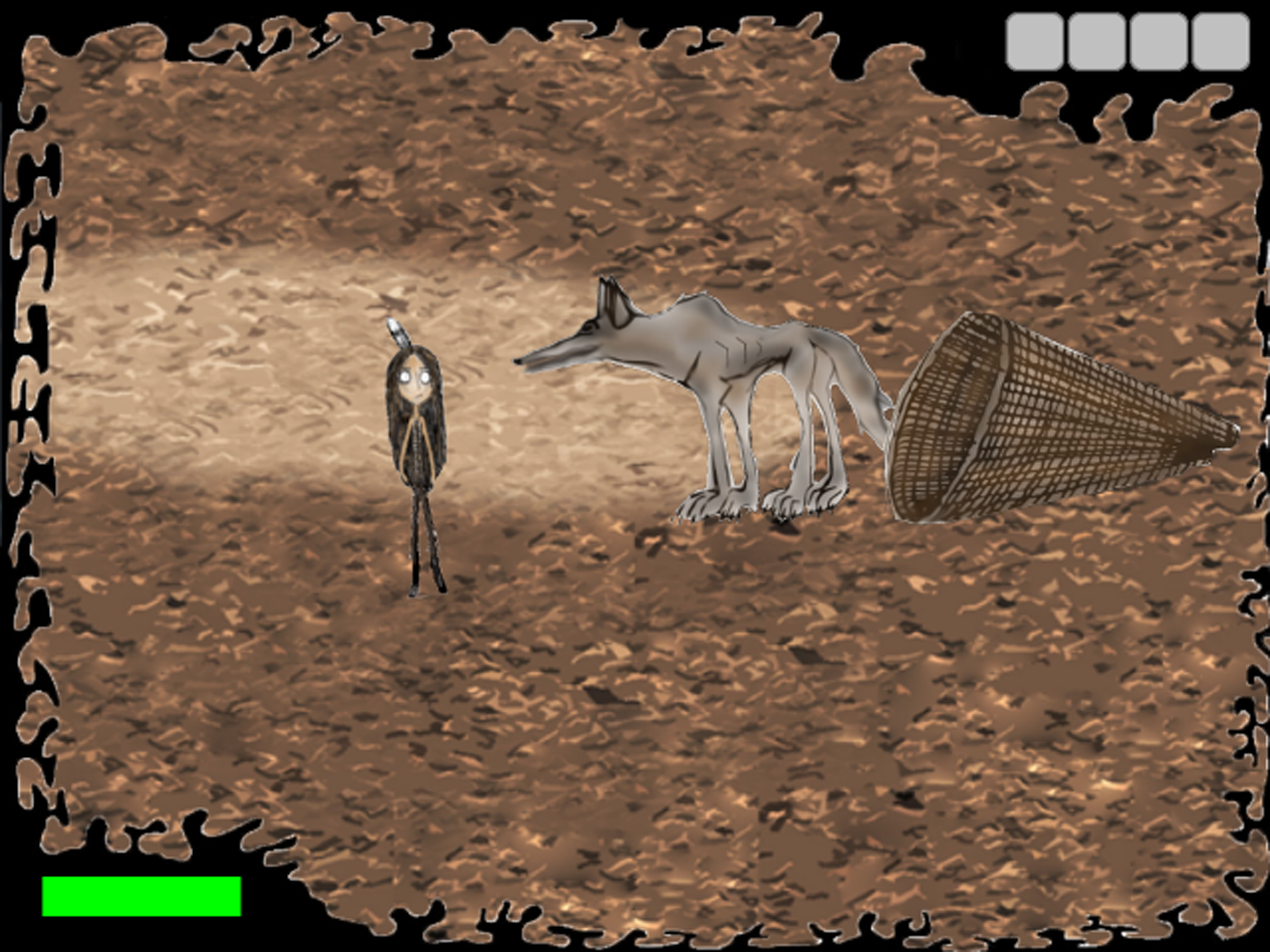 August 13, 2013 – Using an unexpected combination of Native American myth and Tim Burton-style artwork, students at the University of Utah have created the first video game in the Shoshone language.

Students from the Shoshone/Goshute Youth Language Apprenticeship Program, or SYLAP, which is hosted by the Shoshoni Language Project at the University of Utah, worked over the summer with the school’s Entertainment Arts and Engineering program to create a game called “Enee.”

“Enee” – which in Shoshone means “scary, fearful, frightening, oh!” – is a fitting title for the aesthetics of the game play. The game is based on traditional Shoshone stories and incorporates dark, edgy graphics in a contemporary style inspired by film-maker Tim Burton. The student project was led by Cora Burchett, Devin Gardner and Trent Griffith. Their assignment was to use modern technology to teach the Shoshone language and culture in an informational and entertaining way.

“Working with Shoshone youth on this project has shown me that games can do more than just entertain,” says Zeph Fagergren, master’s student in the U’s EAE program.  “‘Enee’ is more than a game, it is a tool to help people keep their culture alive and well. Using the video game format makes it possible for to anyone to learn the Shoshone culture and language.”

The main character of “Enee” lives in the past and is thrust into some of the traditional Shoshone stories. Through the game, Shoshone youth are introduced to the language and cultural elements they may not be exposed to otherwise. Playing the game requires the understanding of Shoshone words and phrases, so players are able to learn Shoshone in a way that is educational and also enjoyable, without using any English. By completing the game, one will have acquired knowledge of the older Shoshone stories and a grasp of basic dialog.

“I think it is great we can incorporate our traditional culture with modern technology,” says Cora Burchett, a student in SYLAP and one of the three game developers.  “‘Enee’ carries on traditions that my grandparents taught me, and I believe that is very important to my future.”

Many traditional Shoshone stories are no longer being shared, and the development team wanted to make them available again, using a modern method to encourage future generations to learn the language and keep the traditions alive.

“‘Enee’ demonstrates that the Shoshone language and culture has a place in the modern world,” says Marianna Di Paolo, director of the Shoshoni Language Project and associate professor of anthropology at the U. “Developing ‘Enee’ was a great example of the goals of the language project: to open the doors to higher education for young Shoshone people and also help them see they don’t have to give up on their language and culture to do so. In fact, just the opposite is true.”

“We believe games are an important tool for the exploration of culture,” adds Roger Altizer, director of game design and production at the U. “Students learn about science, technology, math and art through making games. ‘Enee’ is an example of an extraordinary game that helps students learn about themselves and share their culture in a meaningful and fun way. It’s a privilege to work on such a unique game.”

To learn about the game and play it, visit www.theeneegame.com. More information about the Shoshoni Language Project is available at www.Shoshoniproject.utah.edu.

The Shoshone/Goshute Youth Language Apprenticeship Program – a component of the Shoshoni Language Project – is a 6-week summer program that takes place each summer at the University of Utah.  SYLAP was first conceived of and directed by Katherine Matsumoto-Gray, doctoral student and graduate assistant on the Shoshoni Language Project under the direction of Marianna Di Paolo. It introduces Shoshoni high school students to a university setting with the ultimate goal of increasing their success in higher education.  The experience focuses on learning Shoshoni language in a college course, participating in a paid internship in Shoshoni language documentation and language teaching materials development, and instilling life-skills and self-esteem through group activities, Shoshoni cultural activities and college preparation workshops. The Shoshoni Language Project is funded by Barrick Gold of North America, Inc.

ABOUT ENTERTAINMENT ARTS AND ENGINEERING:

The Entertainment Arts and Engineering Program, or EAE, is an interdisciplinary undergraduate and master’s level graduate program at the University of Utah. EAE was jointly developed with the College of Engineering and the College of Fine Arts with the aim of producing graduates ready to design, develop, and provide leadership for the video games of today and tomorrow. Learn more about the number one ranked program in the country at www.eae.utah.edu.