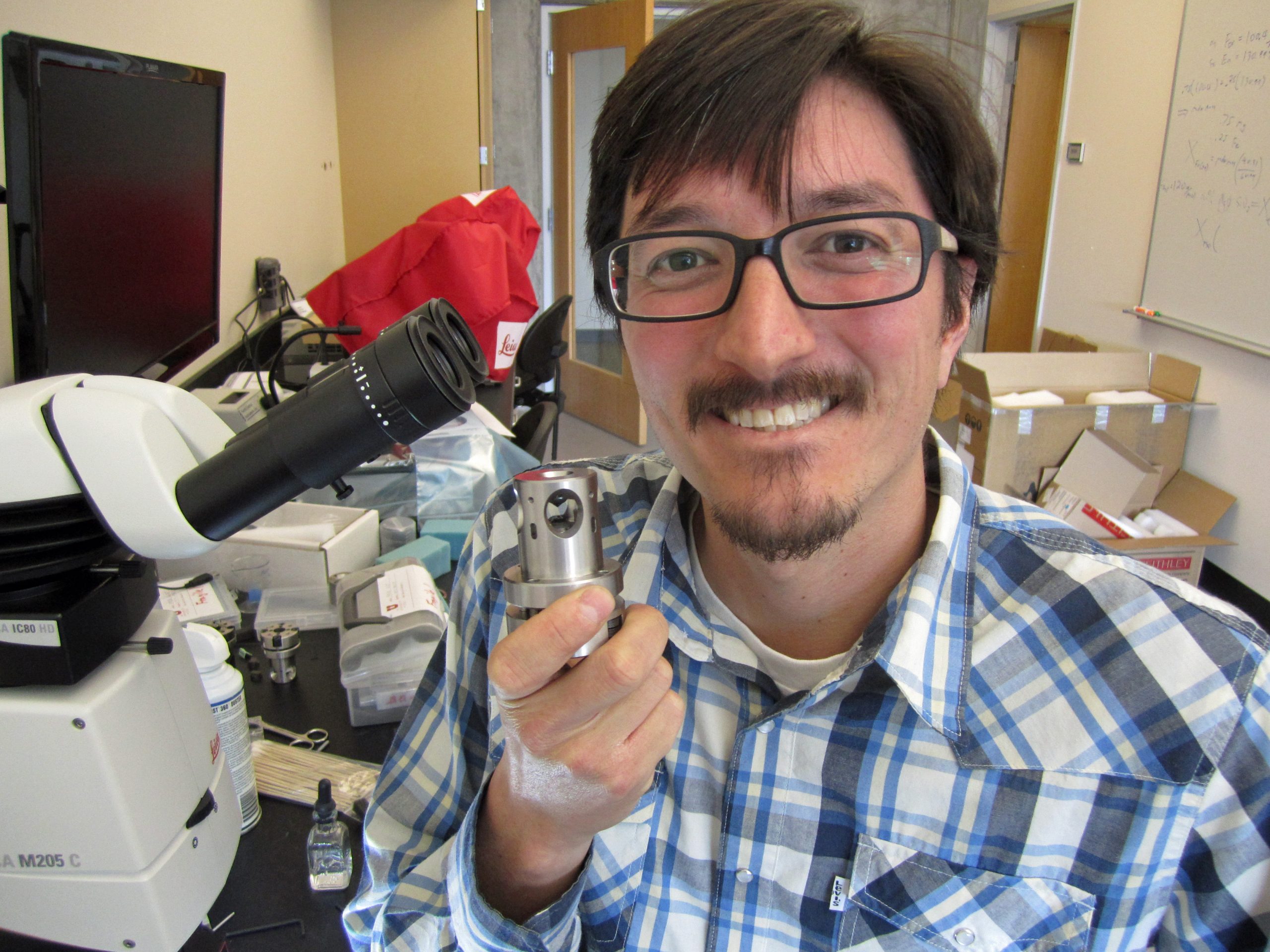 March 23, 2015 – By crushing minerals between diamonds, a University of Utah study suggests the existence of an unknown layer inside Earth: part of the lower mantle where the rock gets three times stiffer. The discovery may explain a mystery: why slabs of Earth’s sinking tectonic plates sometimes stall and thicken 930 miles underground.

The findings – published today in the journal Nature Geoscience – also may explain some deep earthquakes, hint that Earth’s interior is hotter than believed, and suggest why partly molten rock or magmas feeding midocean-ridge volcanoes such as Iceland’s differ chemically from magmas supplying island volcanoes like Hawaii’s.

“The Earth has many layers, like an onion,” says Lowell Miyagi, an assistant professor of geology and geophysics at the University of Utah. “Most layers are defined by the minerals that are present. Essentially, we have discovered a new layer in the Earth. This layer isn’t defined by the minerals present, but by the strength of these minerals.”

Earth’s main layers are the thin crust 4 to 50 miles deep (thinner under oceans, thicker under continents), a mantle extending 1,800 miles deep and the iron core. But there are subdivisions. The crust and some of the upper mantle form 60- to 90-mile-thick tectonic or lithospheric plates that are like the top side of conveyor belts carrying continents and seafloors.

Oceanic plates collide head-on with continental plates offshore from Chile, Peru, Mexico, the Pacific Northwest, Alaska, Kamchatka, Japan and Indonesia. In those places, the leading edge of the oceanic plate bends into a slab that dives or “subducts” under the continent, triggering earthquakes and volcanism as the slabs descend into the mantle, which is like the bottom part of the conveyor belt. The subduction process is slow, with a slab averaging roughly 300 million years to descend, Miyagi estimates.

The researchers found that ferropericlase’s strength starts to increase at pressures equivalent to those 410 miles deep – the upper-lower mantle boundary – and the strength increases threefold by the time it peaks at pressure equal to a 930-mile depth.

And when they simulated how ferropericlase behaves mixed with bridgmanite deep underground in the upper part of the lower mantle, they calculated that the viscosity or stiffness of the mantle rock at a depth of 930 miles is some 300 times greater than at the 410-mile-deep upper-lower mantle boundary.

“The result was exciting,” Miyagi says. “This viscosity increase is likely to cause subducting slabs to get stuck – at least temporarily – at about 930 miles underground. In fact, previous seismic images show that many slabs appear to ‘pool’ around 930 miles, including under Indonesia and South America’s Pacific coast. This observation has puzzled seismologists for quite some time, but in the last year, there is new consensus from seismologists that most slabs pool.”

How stiff or viscous is the viscous layer of the lower mantle? On the pascal-second scale, the viscosity of water is 0.001, peanut butter is 200 and the stiff mantle layer is 1,000 billion billion (or 10 to the 21st power), Miyagi says.

He says the stalling and buckling of sinking slabs at due to a stiff layer in the mantle may explain some deep earthquakes higher up in the mantle; most quakes are much shallower and in the crust. “Anything that would cause resistance to a slab could potentially cause it to buckle or break higher in the slab, causing a deep earthquake.”

Recycled crust and mantle from old slabs eventually emerges as new seafloor during eruptions of volcanic vents along midocean ridges – the rising end of the conveyor belt. The magma in this new plate material has the chemical signature of more recent, shallower, well-mixed magma that had been subducted and erupted through the conveyor belt several times. But in island volcanoes like Hawaii, created by a deep hotspot of partly molten rock, the magma is older, from deeper sources and less well-mixed.

Another implication of the stiff layer is that “if you decrease the ability of the rock in the mantle to mix, it’s also harder for heat to get out of the Earth, which could mean Earth’s interior is hotter than we think,” Miyagi says.

He says scientists believe the average temperature and pressure 410 miles deep at the upper-lower mantle boundary is 2,800 degrees Fahrenheit and 235,000 times the atmospheric pressure on Earth’s surface. He calculates that at the viscous layer’s stiffest area, 930 miles deep, the temperature averages 3,900 degrees Fahrenheit and pressure is 640,000 times the air pressure at Earth’s surface.

Such conditions prevent geophysicists from visiting Earth’s mantle, so “we know a lot more about the surface of Mars than we do Earth’s interior,” Miyagi says. “We can’t get down there, so we have to do experiments to see how these minerals behave under a wide range of conditions, and use that to simulate the behavior of the Earth.”

To do that, “you take two gem quality diamonds and trap a sample between the tips,” he says. “The sample is about the diameter of a human hair. Because the diamond tips are so small, you generate very high pressure just by turning the screws on the press by hand with Allen wrenches.”

Using diamond anvils, the researchers squeezed thousands of crystals of ferropericlase at pressures up to 960,000 atmospheres. They used ferropericlase with 10 percent and 20 percent iron to duplicate the range found in the mantle.

To observe and measure the spacing of atoms in ferropericlase crystals as they were squeezed in diamond anvils, the geophysicists bombarded the crystals with X-rays from an accelerator at Lawrence Berkeley National Laboratory in California, revealing the strength of the mineral at various pressures and allowing the simulations showing how the rock becomes 300 times more viscous at the 930-mile depth than at 410 miles.

The finding was a surprise because researchers previously believed that viscosity varied only a little bit at temperatures and pressures in the planet’s interior.

Descending slabs have been seen as deep as the core-mantle boundary 1,800 miles underground. As the bottom of the conveyor-belt-like mantle slowly moves, the slabs mix with the surrounding rock before the mixture erupts anew millions of years later and thousands of miles away at midocean ridges.