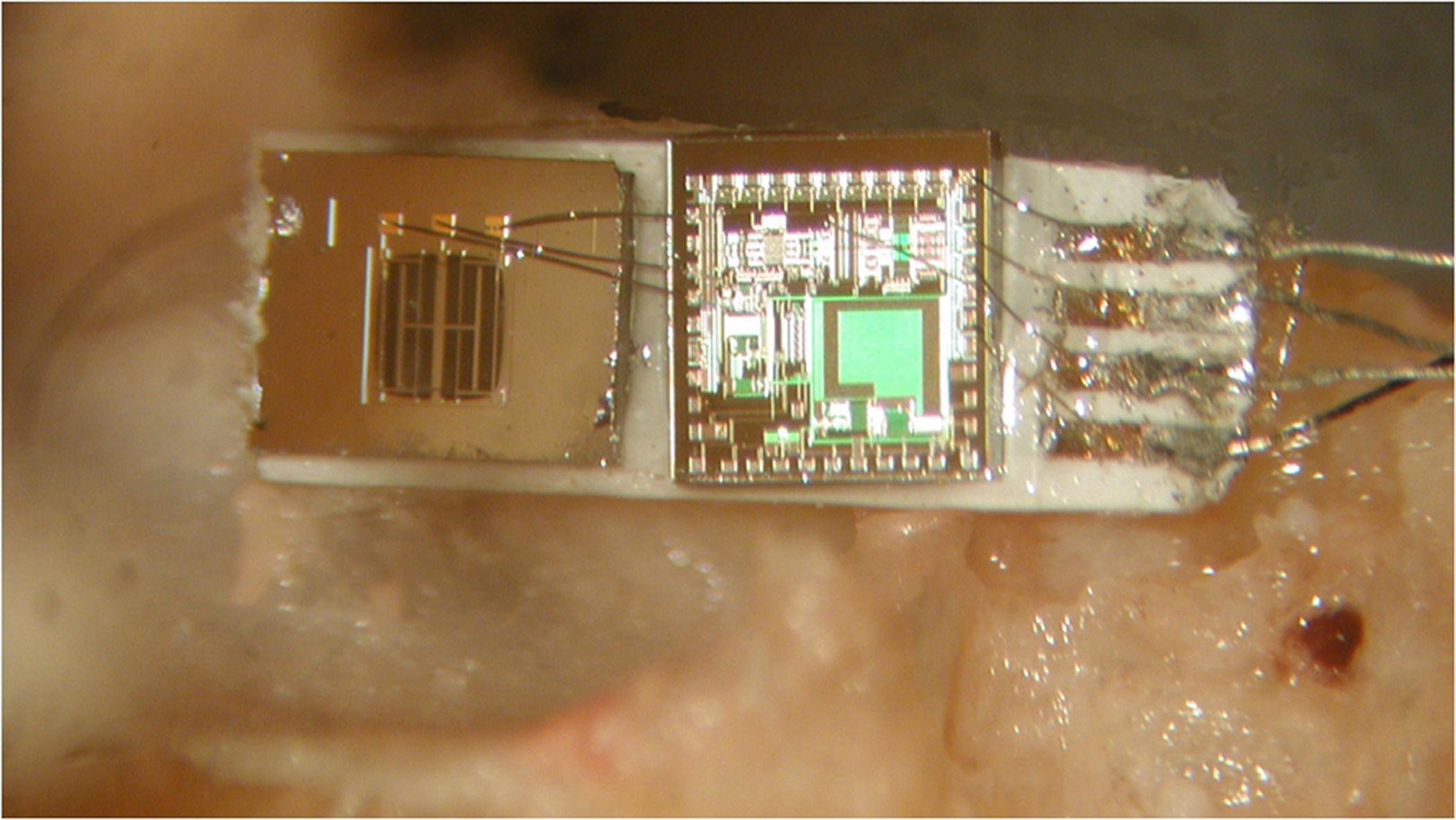 To hear a regular recording of the start of Beethoven’s Ninth Symphony, click here.

To hear the start of Beethoven’s Ninth Symphony, recorded through a new microphone in the middle ear of a cadaver, click here.

April 30, 2012 – Cochlear implants have restored basic hearing to some 220,000 deaf people, yet a microphone and related electronics must be worn outside the head, raising reliability issues, preventing patients from swimming and creating social stigma.

Now, a University of Utah engineer and colleagues in Ohio have developed a tiny prototype microphone that can be implanted in the middle ear to avoid such problems.

The proof-of-concept device has been successfully tested in the ear canals of four cadavers, the researchers report in a study just published online in the Institute of Electrical and Electronics Engineers journal Transactions on Biomedical Engineering.

The prototype – about the size of an eraser on a pencil – must be reduced in size and improved in its ability to detect quieter, low-pitched sounds, so tests in people are about three years away, says the study’s senior author, Darrin J. Young, an associate professor of electrical and computer engineering at the University of Utah and USTAR, the Utah Science Technology and Research initiative.

The study showed incoming sound is transmitted most efficiently to the microphone if surgeons first remove the incus or anvil – one of three, small, middle-ear bones. U.S. Food and Drug Administration approval would be needed for an implant requiring such surgery.

The current prototype of the packaged, middle-ear microphone measures 2.5-by-6.2 millimeters (roughly one-tenth by one-quarter inch) and weighs 25 milligrams, or less than a thousandth of an ounce. Young wants to reduce the package to 2-by-2 millimeters.

Young, who moved the Utah in 2009, conducted the study with Mark Zurcher and Wen Ko, who are his former electrical engineering colleagues at Case Western Reserve University in Cleveland, and with ear-nose-throat physicians Maroun Semaan and Cliff Megerian of University Hospitals Case Medical Center.

The study was funded by the National Institutes of Health (NIH-DC-006850).

The National Institutes of Health says almost 220,000 people worldwide with profound deafness or severe hearing impairment have received cochlear implants, about one-third of them in the United States, where two-fifths of the recipients are children.

In conventional cochlear implant, there are three main parts that are worn externally on the head behind the ear: a microphone to pick up sound, a speech processor and a radio transmitter coil. Implanted under the skin behind the ear are a receiver and stimulator to convert the sound signals into electric impulses, which then go through a cable to between four and 16 electrodes that wind through the cochlea of the inner ear and stimulate auditory nerves so the patient can hear.

“It’s a disadvantage having all these things attached to the outside” of the head, Young says. “Imagine a child wearing a microphone behind the ear. It causes problems for a lot of activities. Swimming is the main issue. And it’s not convenient to wear these things if they have to wear a helmet.”

Young adds that “for adults, it’s social perception. Wearing this thing indicates you are somewhat handicapped and that actually prevents quite a percentage of candidates from getting the implant. They worry about the negative image.”

As for reliability, “if you have wires connected from the microphone to the coil, those wires can break,” he says.

How Sound Moves in Normal Ears, Cochlear Implants and the New Device

Sound normally moves into the ear canal and makes the eardrum vibrate. At what is known as the umbo, the eardrum connects to a chain of three tiny bones: the malleus, incus and stapes, also known as the hammer, anvil and stirrup. The bones vibrate. The stapes or stirrup touches the cochlea, the inner ear’s fluid-filled chamber. Hair cells (not really hair) on the cochlea’s inner membrane move, triggering the release of a neurotransmitter chemical that carries the sound signals to the brain.

In profoundly deaf people who are candidates for cochlear implants, the hair cells don’t work for a variety of reasons, including birth defects, side effects of drugs, exposure to excessively loud sounds or infection by certain viruses.

In a cochlear implant, the microphone, signal processor and transmitter coil worn outside the head send signals to the internal receiver-stimulator, which is implanted in bone under the skin and sends the signals to the electrodes implanted in the cochlea to stimulate auditory nerves. The ear canal, eardrum and hearing bones are bypassed.

The system developed by Young implants all the external components. Sound moves through the ear canal to the eardrum, which vibrates as it does normally. But at the umbo, a sensor known as an accelerometer is attached to detect the vibration. The sensor also is attached to a chip, and together they serve as a microphone that picks up the sound vibrations and converts them into electrical signals sent to the electrodes in the cochlea.

The device still would require patients to wear a charger behind the ear while sleeping at night to recharge an implanted battery. Young says he expects the battery would last one to several days between charging.

Testing the Microphone in Cadavers

Conventional microphones include a membrane or diaphragm that moves and generates an electrical signal change in response to sound. But they require a hole through which sound must enter – a hole that would get clogged by growing tissue if implanted. So Young’s middle-ear microphone instead uses an accelerometer – a 2.5-microgram mass attached to a spring – that would be placed in a sealed package with a low-power silicon chip to convert sound vibrations to outgoing electrical signals.

The package is glued to the umbo so the accelerometer vibrates in response to eardrum vibrations. The moving mass generates an electrical signal that is amplified by the chip, which then connects to the conventional parts of a cochlear implant: a speech processor and stimulator wired to the electrodes in the cochlea.

“Everything is the same as a conventional cochlear implant, except we use an implantable microphone that uses the vibration of the bone,” Young says.

To test the new microphone, the researchers used the temporal bones – bones at the side of the skull – and related ear canal, eardrum and hearing bones from four cadaver donors.

The researchers inserted tubing with a small loudspeaker into the ear canal and generated tones of various frequencies and loudness. As the sounds were picked up by the implanted microphone, the researchers used a laser device to measure the vibrations of the tiny ear bones. They found the umbo – where the eardrum connects to the hammer or malleus – produced the greatest sound vibration, particularly if the incus or anvil bone first was removed surgically.

The experiments showed that when the prototype microphone unit was attached to the umbo, it could pick up medium pitches at conversational volumes, but had trouble detecting quieter, low-frequency sounds. Young plans to improve the microphone to pick up quieter, deeper, very low pitches.

In the tests, the output of the microphone went to speakers; in a real person, it would send sound to the implanted speech processor. To demonstrate the microphone, Young also used it to record the start of Beethoven’s Ninth Symphony while implanted in a cadaver ear. It is easily recognizable, even if somewhat fuzzy and muffled.

“The muffling can be filtered out,” says Young.