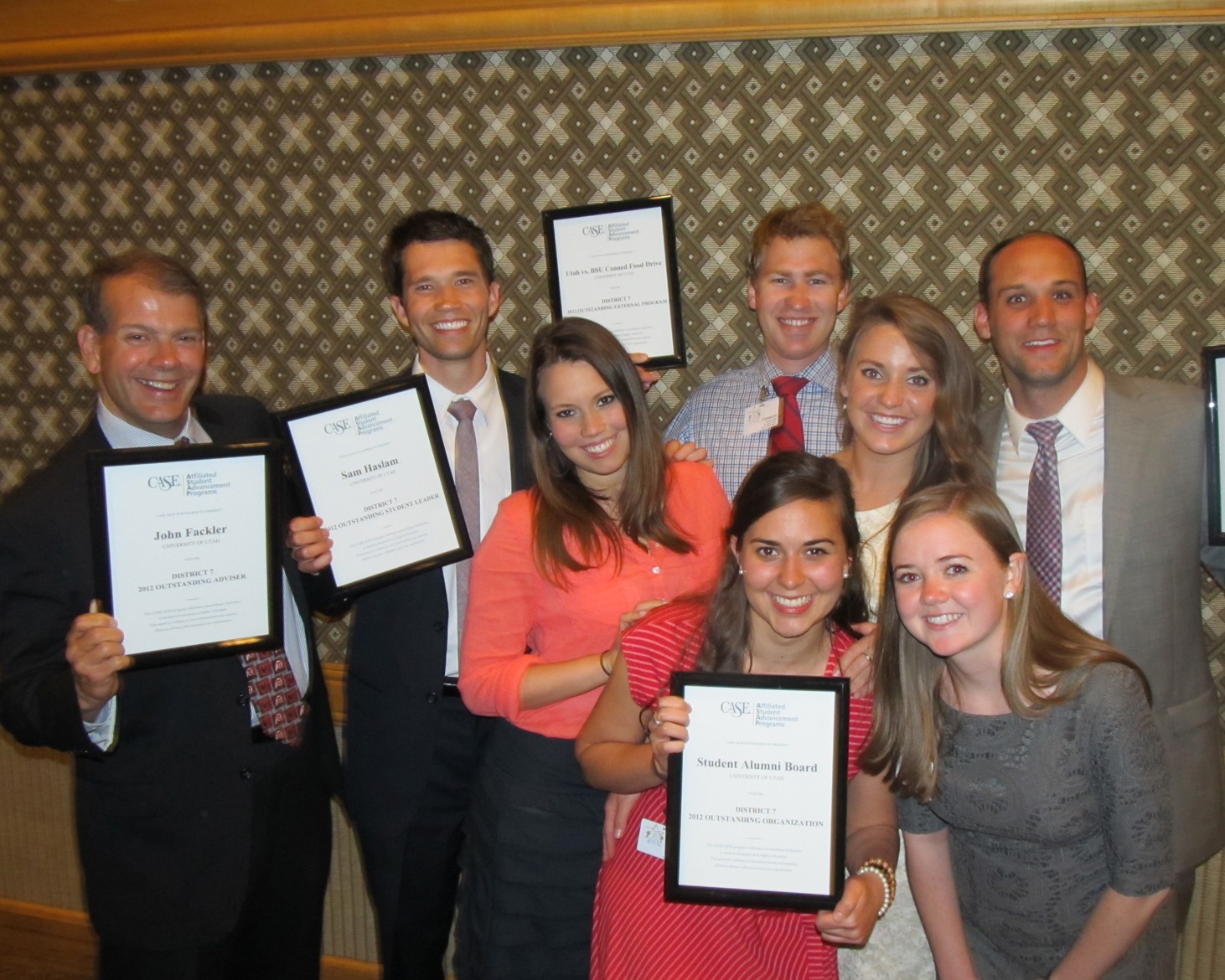 April 27, 2012 – The University of Utah Student Alumni Board and The Mighty Utah Student Section, better known as The MUSS, won five awards at the District 7 western regional conference of the Affiliated Student Advancement Programs of the Council for Advancement and Support of Education (CASE ASAP), held in Los Angeles April 20-21.

Both the Student Alumni Board (SAB) and The MUSS are student organizations of the University of Utah Alumni Association. In winning the awards, the U beat out other institutions in Arizona, California, Hawaii, Nevada and Utah. Receiving the district awards means that the University of Utah programs and individuals will be considered for national awards at the CASE ASAP convention in Indianapolis in early August.

“The Alumni Association is extremely pleased with our student programs under the direction of award-winning adviser John Fackler,” says John Ashton, the U Alumni Association’s executive director. “To have these programs and leaders recognized by CASE is especially rewarding.”

The MUSS, which has become one of the nation’s best student football sections in just 10 seasons, was presented the “Outstanding Tried and True Program” award. The MUSS has grown to a capacity of 6,000 enthusiastic U student members, and registration for the upcoming season has passed 4,800 members with four months to go until the kickoff of the football season.

The Student Alumni Board, consisting of 43 current U students, received the “Outstanding Student Organization” award for its wide range of programming, including Homecoming, U Book, Founders Day, the Utah vs. BYU Food Drive and student recruitment activities.

The Utah vs. BYU Food Drive received the “Outstanding External Program” award. The annual drive thrives on support and leadership from the U Student Alumni Board support and leadership. In the past three years, Utah fans have donated more than 1 million pounds of food and more than $260,000 to the Utah Food Bank. In 2011, despite for the first time the drive not being scheduled around the annual rivalry football game with BYU, the U raised a record 421,000 pounds of food and more than $108,000.

Student Alumni Board President Sam Haslam, a senior majoring in exercise and sports physiology, received the “Outstanding Student Leader” award. He is completing his third year as a board member and previously served as vice president. “Being president of SAB has been the best experience of my college career,” Haslam says. “Having the opportunity to work alongside the best and brightest at the University of Utah has taught me so much. I’ve learned that when a group of dedicated people want something badly enough, they can do anything.”

Director of Alumni Relations John Fackler received the “Outstanding Adviser” award. It was the third time he has received this honor. Fackler has served as adviser to the SAB and The MUSS since 2002.  “Seeing the energy, excitement and just plain loyalty to the U that these students have makes my job an incredible joy,” says Fackler.