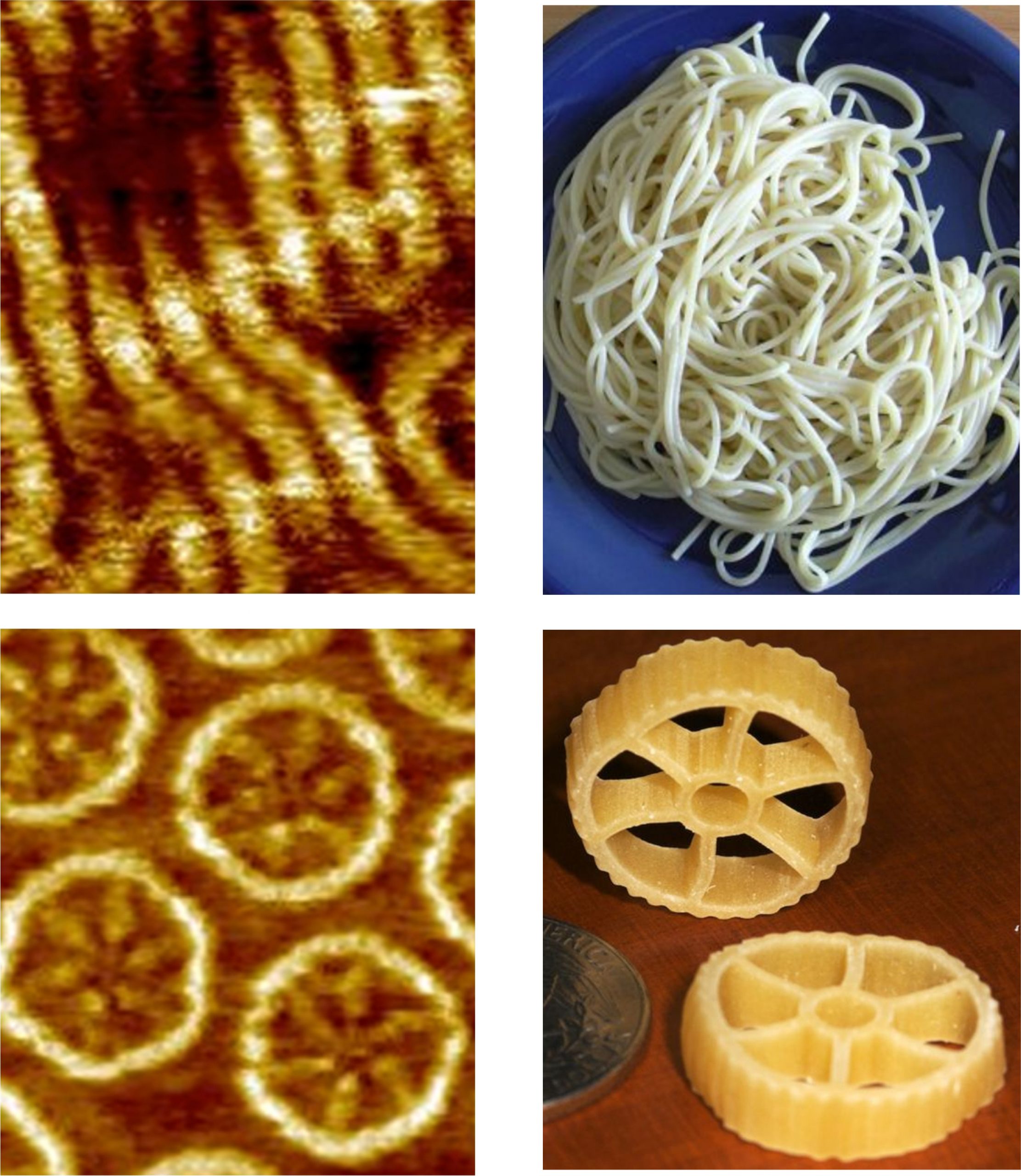 Sept. 29, 2013 – One problem in developing more efficient organic LED light bulbs and displays for TVs and phones is that much of the light is polarized in one direction and thus trapped within the light-emitting diode, or LED. University of Utah physicists believe they have solved the problem by creating a new organic molecule that is shaped like rotelle – wagon-wheel pasta – rather than spaghetti.

The rotelle-shaped molecule – known as a “pi-conjugated spoked-wheel macrocycle” – acts the opposite of polarizing sunglasses, which screen out glare reflected off water and other surfaces and allow only direct sunlight to enter the eyes.

The new study showed wagon-wheel molecules emit light randomly in all directions – a necessary feature for a more efficient OLED, or organic LED. Existing OLEDs now in some smart phones and TVs use spaghetti-shaped polymers – chains of repeating molecular units – that emit only polarized light.

“This work shows it is possible to scramble the polarization of light from OLEDs and thereby build displays where light doesn’t get trapped inside the OLED,” says University of Utah physicist John Lupton, lead author of a study of the spoked-wheel-shaped molecules published online Sunday, Sept. 29 in the journal Nature Chemistry.

“We made a molecule that is perfectly symmetrical, and that makes the light it generates perfectly random,” he adds. “It can generate light more efficiently because it is scrambling the polarization. That holds promise for future OLEDs that would use less electricity and thus increase battery life for phones, and for OLED light bulbs that are more efficient and cheaper to operate.”

Lupton emphasizes the study is basic science, and new OLEDs based on the rotelle-shaped molecules are “quite a way down the road.”

He says OLEDs now are used in smart phones, particularly the Samsung Galaxy series; in pricey new super-thin TVs being introduced by Sony, Samsung, LG and others; and in lighting.

“OLEDs in smart phones have caught on because they are somewhat more efficient than conventional liquid-crystal displays like those used in the iPhone,” he says. “That means longer battery life. Samsung has already demonstrated flexible, full-color OLED displays for future roll-up smart phones.” Lupton says smart phones could produce light more efficiently using molecules that don’t trap as much light.

The large rotelle-shaped molecules also can “catch” other molecules and thus would make effective biological sensors; they also have potential use in solar cells and switches, he adds.

The study was funded by the Volkswagen Foundation, the German Chemical Industry Fund, the David and Lucille Packard Foundation and the European Research Council.

While conventional LEDs use silicon semiconductors, OLEDs in some of the latest cell phones and TVs are made with “pi-conjugated polymers,” which are plastic-like, organic semiconductors made of a chain of repeating molecular units.

“Conjugated polymers are a terrible mess,” Lupton says. “They now make only mediocre OLEDs, although people like to claim the opposite.”

For one thing, three-quarters of the light energy is in a state that normally is inaccessible – a problem addressed by another recent University of Utah study of OLEDs. Lupton says his study deals with another problem, which exists even if the other problem is overcome: the polarization of light in pi-conjugated polymers that leads to the “trapping” or loss of up to 80 percent of the light generated.

“Light is an oscillating field like a wave, and a wave moves in a certain direction,” Lupton says. “We call this direction of oscillation a polarization.”

Because polymers are long molecules like spaghetti, when an electrical current is applied to a polymer, “the electrons can only flow in one direction and that generates the light waves,” Lupton says. “Because those light waves only oscillate in one direction, the light can get trapped inside the OLED, which is a little bit like an optical fiber.”

That, he adds, is why even with the latest OLED smart phones, “your battery is dead in two days because the display uses a lot of the electricity.”

“The rotelle – technically called oligomers – are basically wrapped-up polymers,” Lupton says. “They all have the same shape, but they do not emit polarized light because they are round. They generate waves that vibrate in all directions. The light doesn’t have a fixed polarization; it doesn’t vibrate in a fixed direction. It always can get out.”

Lupton compares the ability of the wagon-wheel molecules to emit unpolarized light in all directions to what happens when a pencil is balanced perfectly on its tip and falls in a different, random direction each time.

Cooking up a Wagon Wheel-Shaped Molecule

The international team of physicists and chemists set out to make molecules that generate light waves in all directions rather than in a fixed direction. In the new study, they report how the created the spoked-wheel molecules, made images of them and did single-molecule experiments, including looking at photons, or light particles, emitted one at a time from a single molecule. In those experiments, they shined an ultraviolet light on the rotelle-shaped molecules to generate visible light photons.

“We showed that every photon that comes out has a scrambled polarization, the polarization changes randomly from photon to photon,” Lupton says.

The emitted light is blue-green, Lupton says, but images accompanying the paper – taken with a scanning tunneling electron microscope – show the rotelle- and spaghetti-shaped molecules with a false yellow-brown color to provide good contrast.

Each wagon-wheel molecule measures only six nanometers wide, which is large for a molecule but tiny compared with the 100,000 nanometer width of a human hair.

Using rotelle-shaped oligomers instead of spaghetti-shaped polymers, “in principle, we should be able to double the efficiency of getting the light out” – although that remains to be proved, Lupton says.

“Even if we scramble the polarization, we’re always going to have a bit of light trapped in the OLED,” he says. “Those losses are now 80 percent, and we probably could get down to 50 or 60 percent.”