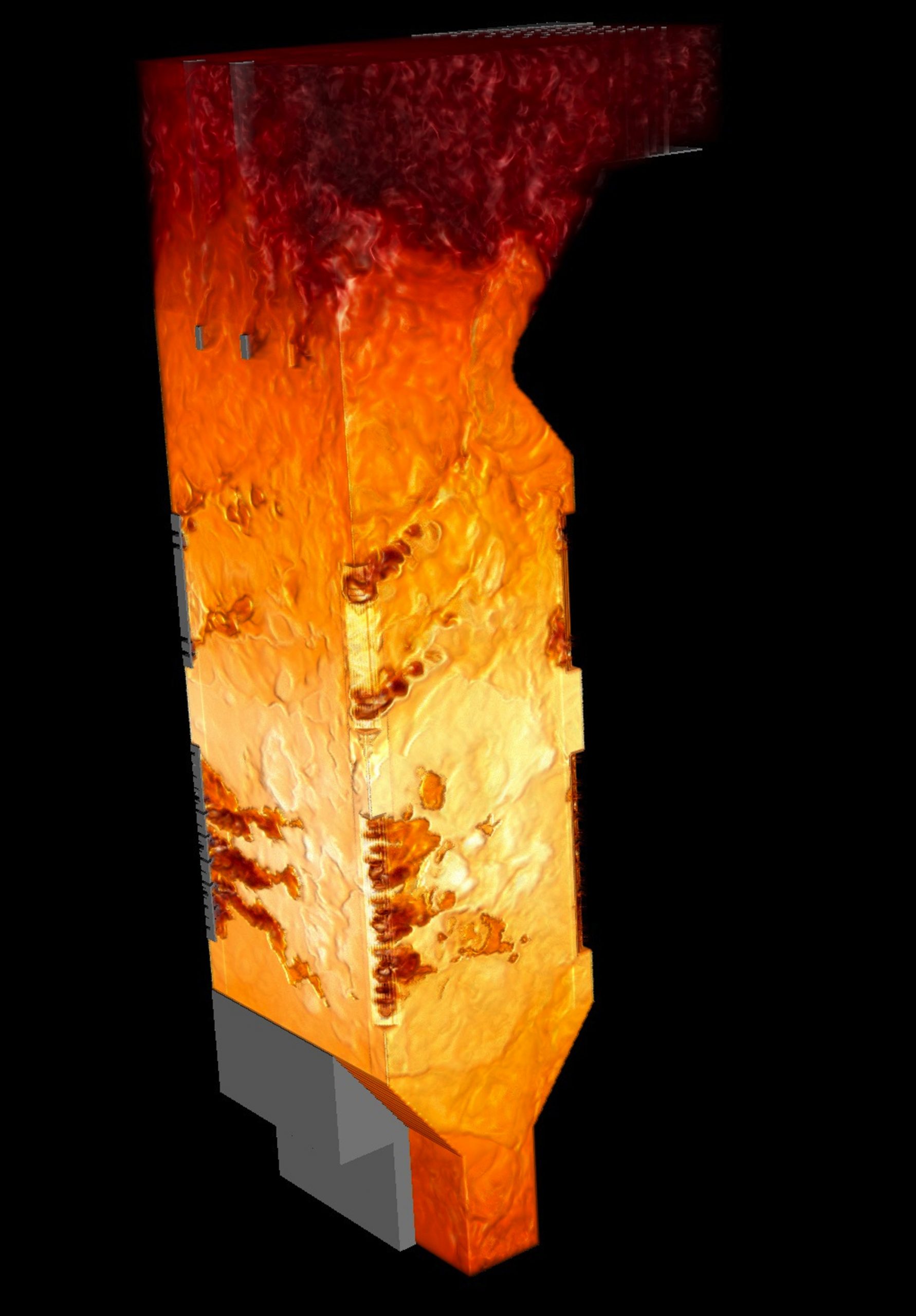 Sept. 30, 2013 – University of Utah engineers will use a five-year, $16 million grant to conduct supercomputer simulations aimed at developing a prototype low-cost, low-emissions coal power plant that could electrify a mid-sized city. The goal of this “predictive science” effort is to help power poor nations while reducing greenhouse emissions in developed ones.

The grant by the U.S. Department of Energy’s National Nuclear Security Administration is enabling University of Utah researchers Philip J. Smith and Martin Berzins, along with university President David W. Pershing, to establish the Carbon Capture Multidisciplinary Simulation Center. All three are professors in the university’s College of Engineering.

The researchers will use supercomputers to simulate and predict performance for a proposed 350-megawatt boiler system that burns pulverized coal with pure oxygen rather than air. The design – which never has been built – captures carbon dioxide released during power generation.

Through computer modeling, researchers will address uncertainties that could arise in building such a power plant. They hope their findings will expedite deployment of clean, economical power to developing nations, where nearly 1.2 billion people lack electricity, and help industrialized nations meet increasingly stringent emissions standards, like those recently proposed by the Environmental Protection Agency. The work also will establish the University of Utah as a hub of predictive science.

Plans have yet to be made regarding when or where a prototype of the new coal power plant design will be built by the European company that designed it.

“This is a very important award for the university – not only because of its size, but because it builds on the strength of our faculty and staff in energy, uncertainty, parallel computing and visualization,” says Pershing, a distinguished professor of chemical engineering. “It will provide critical funding for students to study these topics on some of the world’s largest supercomputers.”

Stemming from the ban on nuclear testing, predictive science allows engineers to virtually test and manage nuclear weapons, as well as all-new technologies such as power plants before they are built. This enables officials to check the safety, security and reliability of the U.S. nuclear stockpile and new technologies without physical testing.

“Society made projections off of ‘gut feel,’ and now it’s asking science to compute what will happen, so we’re making decisions off of computed results,” says Smith, a professor of chemical engineering and director of the new center.

The majority of the grant will enable students, faculty and staff to develop and run software on Department of Energy supercomputers.

“For perspective, that’s using half a million to 1 million computer processors at once on one problem for several days,” says Smith.

This grant builds upon the University of Utah’s experience in predictive science, particularly its previous 13-year effort – also funded by the National Nuclear Security Administration – for simulation studies of accidental fires and explosions.

Established by Congress in 2000, the National Nuclear Security Administration is a semi-autonomous agency in the Department of Energy and is responsible for enhancing national security through the military application of nuclear science. It maintains and enhances the safety, security, reliability and performance of the U.S. nuclear weapons stockpile without nuclear testing; works to reduce global danger from weapons of mass destruction; provides the U.S. Navy with safe and effective nuclear propulsion; and responds to nuclear and radiological emergencies in the U.S. and abroad.