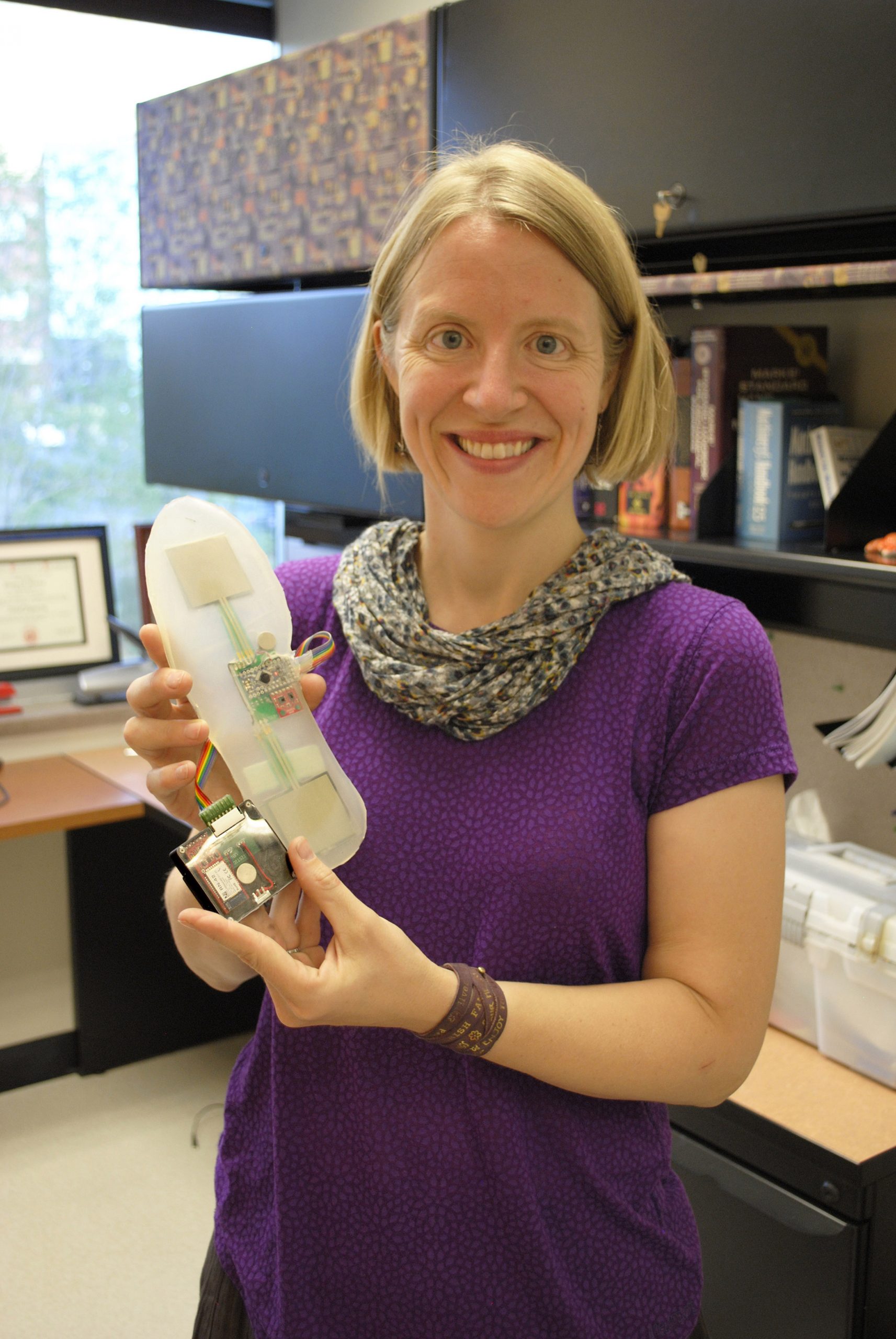 Nov. 8, 2012 — Move over Nike Plus. University of Utah (the U) professor Stacy Bamberg, of the Department of Mechanical Engineering, is developing a shoe insole that can gather comparable data to Nike’s popular line of high-tech sneakers and does more than track laps and airtime. The new insole, which Bamberg calls the Rapid Rehab system, will eventually help correct walking problems for people with artificial legs, hip replacements and broken legs.

Bamberg is developing the new smart insole through her startup company Veristride. She is currently on sabbatical to develop the product, and the company recently received a $150,000 Small Business Innovation Research grant and a $40,000 Technology Commercialization and Innovation grant from the Utah Governor’s Office of Economic Development.

“I started this research when I was a doctoral student 10 years ago, and it’s exciting to see everything finally coming together,” says Bamberg, who holds undergraduate and graduate degrees in engineering from MIT. “In the last few years, we have published several papers on this technology. We are now working hard to get our product to people who need it the most.”

The real-time Rapid Rehab system uses a custom gel insole with force sensors, accelerometers and gyroscopes to detect a person’s gait, or walking pattern. The immediate use for this technology is for amputees who would like to reduce how much they limp when using prosthetic legs. The Rapid Rehab system monitors footsteps and provides continuous feedback during every step.

The software component of the Rapid Rehab system is one if its biggest advantages. Bamberg and her colleagues created a smartphone application that wirelessly tracks data from the insole and provides a variety of instantaneous feedback. Users or physical therapists can choose from visual, audio or sensory feedback.

“This has been an incredible project to work on,” says Matthew Schmidt, a University of Utah graduate student in the Department of Mechanical Engineering who helped improve the insole’s electronic and software components. “Stacy is one of the world’s leading experts in the area of instrumented insole technology. Rapid Rehab could revolutionize the way physical therapists correct walking problems.”

Other students contributed to the project, including a team from the U’s Lassonde New Venture Development Center. These graduate students evaluated the commercial potential of the Rapid Rehab system and prepared a detailed business plan. In addition, the U’s Technology Commercialization Office provided critical support in launching Veristride and obtaining initial funding.

Several sensors are embedded in the insole of the Rapid Rehab system. The current prototype has two force-sensitive resistors for tracking pressure when the foot is on the ground. In addition, it has an inertial measurement unit, which includes an accelerometer and gyroscope for measuring foot position and angle. The device can be customized to track most types of foot movement or pressure.

Bamberg eventually wants to expand the uses for Rapid Rehab to help people who have received a hip replacement or suffered a bone fracture and need to correct their gait as they heal. Corrections are important because uneven steps, such as limping, can cause falls, osteoarthritis and other health problems. Beyond that, shoe companies like Nike might even be interested in applications for the sports world.

Bamberg and her colleagues have written two scientific publications about instrumented insole systems. One published in 2008, is based on her Ph.D. thesis and demonstrated the ability to use sensors in shoes for analyzing gait away from a motion lab. The other is in press and further demonstrates the device’s accuracy and potential for helping people with irregular walking patterns.

Rapid Rehab has several benefits over competing technologies. Unlike a gait-analysis laboratory, it is inexpensive and can be used in any real-world setting. It is much more accurate than subjective observations by a physical therapist. It also gives users more feedback and control, which can result in quicker results.

Within a few years, Bamberg hopes to be selling the Rapid Rehab system to physical therapists and their patients for around $500.

“We are on the verge of having a major impact on the lives of amputees and others who struggle with gait abnormalities,” says Bamberg. “We will be working rapidly toward commercial production. All the essential pieces are already in place. We want our system to be used by every physical therapist in the country and across the world.”