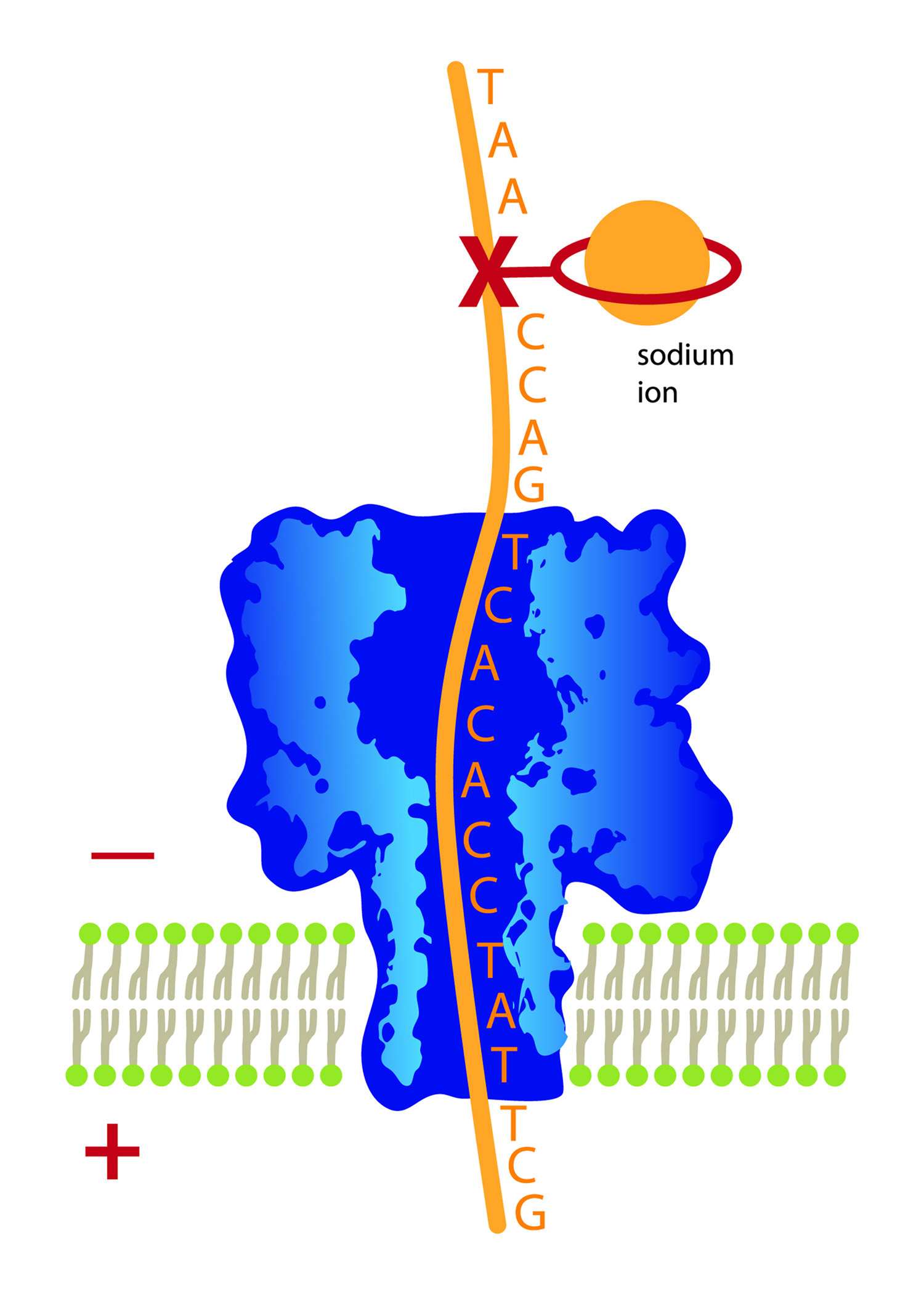 June 18, 2012 – Scientists worldwide are racing to sequence DNA – decipher genetic blueprints – faster and cheaper than ever by passing strands of the genetic material through molecule-sized pores. Now, University of Utah scientists have adapted this “nanopore” method to find DNA damage that can lead to mutations and disease.

The chemists report the advance in the week of June 18 online edition of the journal Proceedings of the National Academy of Sciences.

“We’re using this technique and synthetic organic chemistry to be able to see a damage site as it flies through the nanopore,” says Henry White, distinguished professor and chair of chemistry at the University of Utah and senior coauthor of the new study.

Strands of DNA are made of “nucleotide bases” known as A, T, G and C. Some stretches of DNA strands are genes.

The new method looks for places where a base is missing, known as an “abasic site,” one of the most frequent forms of damage in the 3-billion-base human genome or genetic blueprint. This kind of DNA damage happens 18,000 times a day in a typical cell as we are exposed to everything from sunlight to car exhaust. Most of the damage is repaired, but sometimes it leads to a gene mutation and ultimately disease.

By combining nanopore damage-detection with other chemical ways of altering DNA, the researchers hope to make this new technique capable of detecting other kinds of DNA damage by converting the damage to a missing base, says the study’s other senior coauthor, Cynthia Burrows, a distinguished professor of chemistry at the University of Utah.

She adds: “Damage to the bases of DNA contributes to many age-related diseases, including melanoma; lung, colon and breast cancers; Huntington’s disease; and atherosclerosis.”

A patent is pending on the new method of doing chemistry on DNA that allows damage sites to be found using nanopore technology.

White and Burrows conducted the study with first author, Na An, a doctoral student in chemistry and Aaron Fleming, a postdoctoral research associate in chemistry. The study was funded by the National Institutes of Health, with equipment and software donations by Electronic BioSciences of San Diego.

Sequencing is the process of determining the order of the nucleotide bases A, C, G and T in one of the two strands of bases that make up a DNA double helix. It is the basic method used to determine the genomes, or genetic blueprints, of living organisms and to identify disease-causing mutations in genes.

“Twenty years ago, it cost $1 billion to sequence the first human genome,” while the cost now runs from $5,000 to $20,000, White says. “The National Institutes of Health has had the $1,000 genome project for a few years, and the price likely will go lower.”

DNA sequencing is important in many ways. It is used by police to implicate or clear criminal suspects and by biologists to understand each living organism. “You can use it in agriculture if you modify a plant genome to produce a better plant,” White says.

Faster, cheaper genomes of individual people promise an era of “personalized medicine,” with treatments based on each person’s genetic susceptibilities.

Using Nanopores to Look for Damage

Unlike efforts to achieve nanopore sequencing of DNA, the Utah chemists are not reading the sequence of DNA bases as the strand move through a pore – although they eventually want to do so – but “we are detecting single base damage,” White says.

“It’s important to know how a damaged base leads to a mutation because that is the first step in a disease occurring,” he adds. “Right now, we can see the damaged site and tell approximately where it is within the piece of DNA we’re analyzing” – to within about five or 10 bases. The goal is to pinpoint damage sites, and to understand how damage at specific sites leads to disease.

So far, the longest piece of DNA the Utah chemists put through a nanopore was about 100 bases long, and they were able to detect one or two damage sites.

“We’ve still got to do a lot of research and come up with ways of improving this,” White says. “It’s a very promising and new way of doing it. There are no other ways of doing what we’re trying to do,” namely, not only identify damage, but get sequence information to pinpoint damaged locations on a DNA strand.

The pore used by many DNA sequencers and by the Utah chemists is named alpha-hemolysin, and is a protein that comes from bacteria. To pass DNA through such a pore, a tiny hole – only 400 nanometers wide, about a half percent as wide as a human hair – is made in a glass membrane in the bottom of a glass tube. A soapy solution (known as a lipid bilayer) spreads out and forms film across that hole. The protein pore is embedded within the lipid bilayer.

The protein pore is somewhat mushroom shaped – wider at the top where the DNA strand is captured and narrower at the bottom where the strand must pass through a tiny hole. The narrowest part of the pore measures 1.4 nanometers wide, not much wider than the 1-nanometer-wide single strand of DNA that must pass through the pore.

The billions of bases that make up a DNA strand are attached to a backbone of sugar and phosphate. To look for DNA damage in the form of a missing base, the researchers turn on the voltage, which makes current flow through the electrolyte. A positive electrode in the liquid outside the pore pulls DNA through the pore because the DNA has negatively charged phosphates making up its backbone.

The researchers created damage on some DNA by removing some bases. Where bases were missing, the sugar in the DNA backbone was exposed. The chemists attached a ring- or crown-shaped chemical known as an “18-crown-6 ether” to the sugar.

The trick was to get the DNA, with the crown ether attached, to pass through the nanopore slowly enough so missing bases can be detected.

Burrows compares the process to threading a needle. The DNA strand, once threaded through the eye of the needle, can be pulled through quickly and the presence of a tiny damage site – a nick in the thread – will never be noticed. Except in this case, chemists have converted the nick to a tiny loop in the thread, the crown ether. How fast the DNA can move through the tiny pore depends on the stiffness and size of the crown ether loop that marks the site of DNA damage. This can be changed with the addition of salts that attach to the loop.

The chemists tested different salts to find the best one to use as an electrolyte: potassium chloride, lithium chloride and sodium chloride, which is table salt. Whatever salt is used, the positive ion (potassium, lithium or sodium) gets bound inside the loop. That helps researchers read the current as a DNA strand moves through the pore.