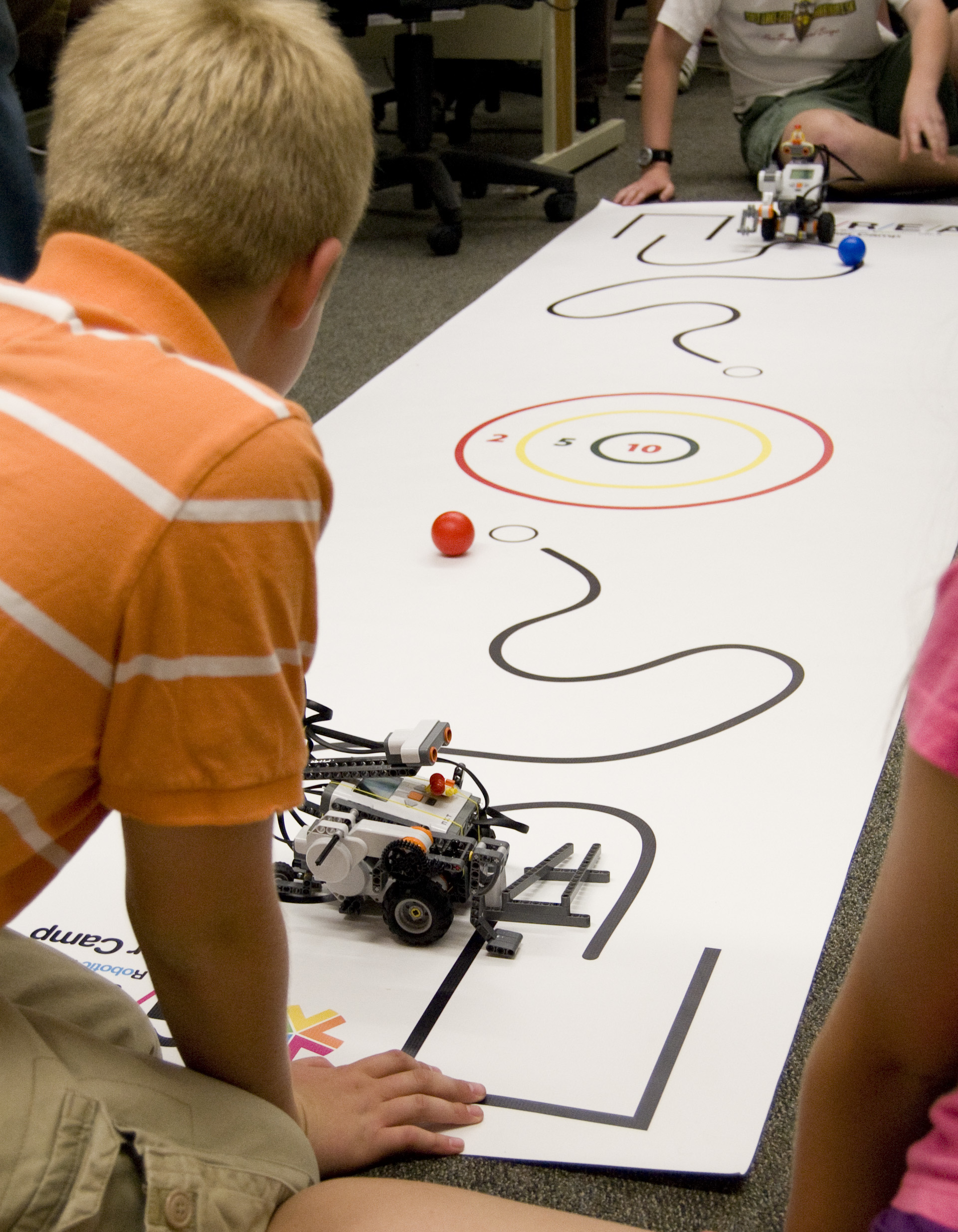 July 13, 2011 – Thanks to the University of Utah’s School of Computing, hundreds of elementary, middle and high school kids are in for a “great” experience. The GREAT (Graphics & Robotic Exploration with Amazing Technology) summer camps are a week-long foray into robotics complete with programming, animation, competitions and even the design of a complex mechanical chain reaction.

Started four years ago with just 35 middle school students, the camps have grown to host over 300 for one- or two-week courses mostly held at the University of Utah (the U). One week of camps is held in Provo at the headquarters of Novell. Spanning a total of five weeks, the camps are coordinated by Research Associate David Johnson with a team of undergraduate computer science and graduate mechanical engineering students.

While the camp activities are a fun way for students to spend a summer vacation, they are really “training the brain to solve difficult problems by breaking them into manageable steps like a computer programmer or engineer would,” Johnson says. “Even though our methods can be very different, the logical process is similar.”

Both disciplines embrace a step-by-step, deliberate way of working through a problem, however complex or simple. Johnson uses the example of telling someone how to make a peanut butter sandwich. “Many people would say, ‘Spread peanut butter on a slice of bread and then cover it with a second slice.’ These classes, however, teach kids to think more in terms of step-by-step problem solving, such as: ‘First, go to the cupboard, open it, check to see if you have peanut butter and bread. Next, take them out of the cupboard, close it, and so on. It’s a good way of approaching problems that helps break them into smaller components.”

It might seem that the weeks are so full students would spend all their time hunched in front of a computer or building a robot. On the contrary, Johnson and his team try to make sure the students stay active and even take them outside to work on techniques for problem solving with exercises like having one student verbally guide another through an obstacle course while blindfolded.

While the camps are scheduled through July 29, media are encouraged to visit around 1 p.m. on Friday, July 22, in the university’s Warnock Engineering Building. Arrangements can be made by contacting David Johnson at 801-585-1726 or dejohnso@cs.utah.edu. That afternoon, students will display their projects, such as completed robots, original animation and a Rube Goldberg-type chain reaction.

A description of the camps follows:

A week-long camp for 4th, 5th and 6th graders uses a computer program called Scratch to make animations and games. The class begins with instruction, followed by children mimicking the instructor, then a challenge (such as creating an animated character and making it do something) and, finally, it ends with an independent creation by the student.

This is all done in one week. The students are paired in a classroom with their own computer, which they use to help each other follow along with the instructor. No prior experience is necessary for the beginning elementary class. An advanced class also is offered for children in 6th grade who have completed the beginning camp. In the advanced class, students learn more complex programming techniques on Scratch.

In the graphics and robotics camp designed for entering 7th, 8th and 9th graders, students use software called Alice to create 3-D animations and games. The week also includes building and programming Lego Mindstorms robots – a kit produced by the popular toy block company – to compete in various challenges on the last day of the week.

Another offering geared for middle-schoolers, but that is also available for all ages, is an intensive re-creation of the robot games in a First Lego League (FLL) competition, a world-wide robotics contest run in many schools. This camp provides good practice for experienced FLL students as well as students who plan to compete for the first time in the fall.

The advanced robotics class offered to entering 10th, 11th and 12th graders, or to 9th-grade students who have taken a middle school camp, gives teens the chance to build machines that react to their environment through programming computers, sensors and motors using a processor called Arduino. In this “all-in-one” week, students will learn to make the robot out of wires, wheels and other parts, and write the program that manipulates it. This camp requires no prior experience, but some interest or aptitude in computers or building things is expected.

In the advanced programming class for the same age group, students learn the popular Python programming language and use it to write games by themselves and in groups. This game is aimed at students who show interest or aptitude in computers, programming or math.

Johnson says these classes would not be possible without industry and community sponsors and he credits them with helping to keep the cost of the camps down. The $185 per week tuition includes about six hours of instruction per day and, most times, lunch or a snack.

The camps were originally sponsored by the software company, Novell, headquartered in Provo. Since then, Microsoft, NVIDIA and Hill Air Force Base have lent their support in different ways: A Microsoft executive attended an earlier version of the camps as a teen and has since decided to support the university’s project; Hill Air Force Base, buys up slots of time and sends elementary and middle school students to the camps; and the graphics card company NVIDIA lends its support to encourage recruitment of girls to the camps.