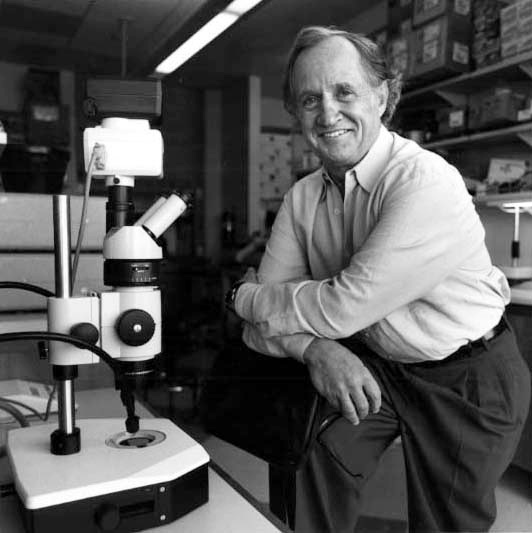 May 9, 2002 –President Bush Names 15 to Receive National Medal of Science

Fourteen scientists and one engineer today were named by President Bush to receive the National Medal of Science, the nation’s highest award for lifetime achievement in fields of scientific research. The honorees will receive the medals at a White House ceremony in the near future. Thirteen of these premier researchers received funding support from the National Science Foundation (NSF) during their careers. The president also announced the recipients of the National Medal of Technology.

“Each one of these individuals has helped advance our country’s place as a leader in discovery, creativity and technology,” the president said. “Their contributions have touched all of our lives and will continue to do so.”

Six of those named to receive the science medal have made lasting and continuing contributions to a burgeoning list of discoveries and technology breakthroughs in the biological sciences. Four have pioneered in studies of genetics — a rapidly expanding area of research which has been bolstered by their discoveries. Francisco J. Ayala of the University of California, Irvine revolutionized molecular biology in the study of the origins of species. Mario R. Capecchi of the University of Utah School of Medicine developed new tools that revolutionized the study of mammalian genetics and provided important new models for human genetic diseases. Victor A. McKusick of the Johns Hopkins University School of Medicine was largely responsible for bringing genetics into the mainstream of clinical medicine, and one of the first to push for the Human Genome Project. Harold Varmus is well-known for his Nobel Prize-winning discovery, with J. Michael Bishop, chancellor of the University of California in San Francisco, that normal human and animal cells contain genes capable of becoming cancer genes, which led to an aggressive and successful search for genetic origins of cancer by the scientific community. Varmus is now president of Sloan-Kettering Cancer Center in New York City after serving as director of the National Institutes of Health for six years.

The other laureates in biological sciences have done ground-breaking work on the brain and the environment, and how they affect our daily lives. Ann M. Graybiel of M.I.T. did pioneering work on the functional anatomy and physiology of the brain systems involved in disorders such as Parkinson’s and Huntington’s diseases and obsessive compulsive disorder. Gene E. Likens of the Institute of Ecosystem Studies in Millbrook, N.Y., documented for the first time in North America the environmental consequences of the phenomenon known as acid rain.

George F. Bass of Texas A&M University is receiving the Medal of Science in behavioral and social sciences for fathering underwater archaeology after publishing the first complete excavation findings of an ancient shipwreck.

In chemistry, honorees include Ernest R. Davidson of Indiana University, whose studies changed our understanding of the nature of matter. Gabor A. Somorjai of the University of California, Berkeley and Lawrence Berkeley National Lab is honored as the world’s leading authority in the development of modern surface science, having established the molecular foundation of many surface-based technologies.

In engineering, Andreas Acrivos of City College, City University of New York, is honored for helping establish the field of suspension mechanics, essential to oil production and semiconductor manufacturing processes.

Two mathematicians receiving the medal are Calyampudi R. Rao of Pennsylvania State University, who led the theoretical work toward the foundations of statistics, and Elias M. Stein of Princeton University, who greatly influenced the shaping of mathematical analysis fields.

Marvin L. Cohen, Raymond Davis, Jr., and Charles D. Keeling are honored in the physical sciences. Cohen, from the University of California, Berkeley, has had a major impact on semiconductor technology through his work in materials science. Davis, Jr., while at Brookhaven National Laboratory, was the first scientist to measure the flux of neutrinos from the sun that are responsible for energy generation in the sun. Charles D. Keeling of the Scripps Institution of Oceanography in San Diego pioneered studies on the impact of the carbon cycle to changes in climate, collecting some of the most important data in the study of global climate change.

“Their contributions to the world around us are enormous. Their ideas have led to major breakthroughs in human health and the tools evolving from their research have put the U.S. in the forefront of many new industries,” NSF Director Rita Colwell explained. “We are proud of these extraordinary people – and grateful for their unceasing inquisitiveness, creativity and dedication to obtain new knowledge for the good of all humankind.”

For more information, see Fact Sheet: Vital Information on the Awardees of the 2001 National Medal of Science
http://www.nsf.gov/od/lpa/news/02/fsmos01_vitalinfo.htm

For more information on National Medals of Science, see:
http://www.nsf.gov/nsb/awards/nms

For information on National Medals of Technology, see:
http://www.ta.doc.gov/medal