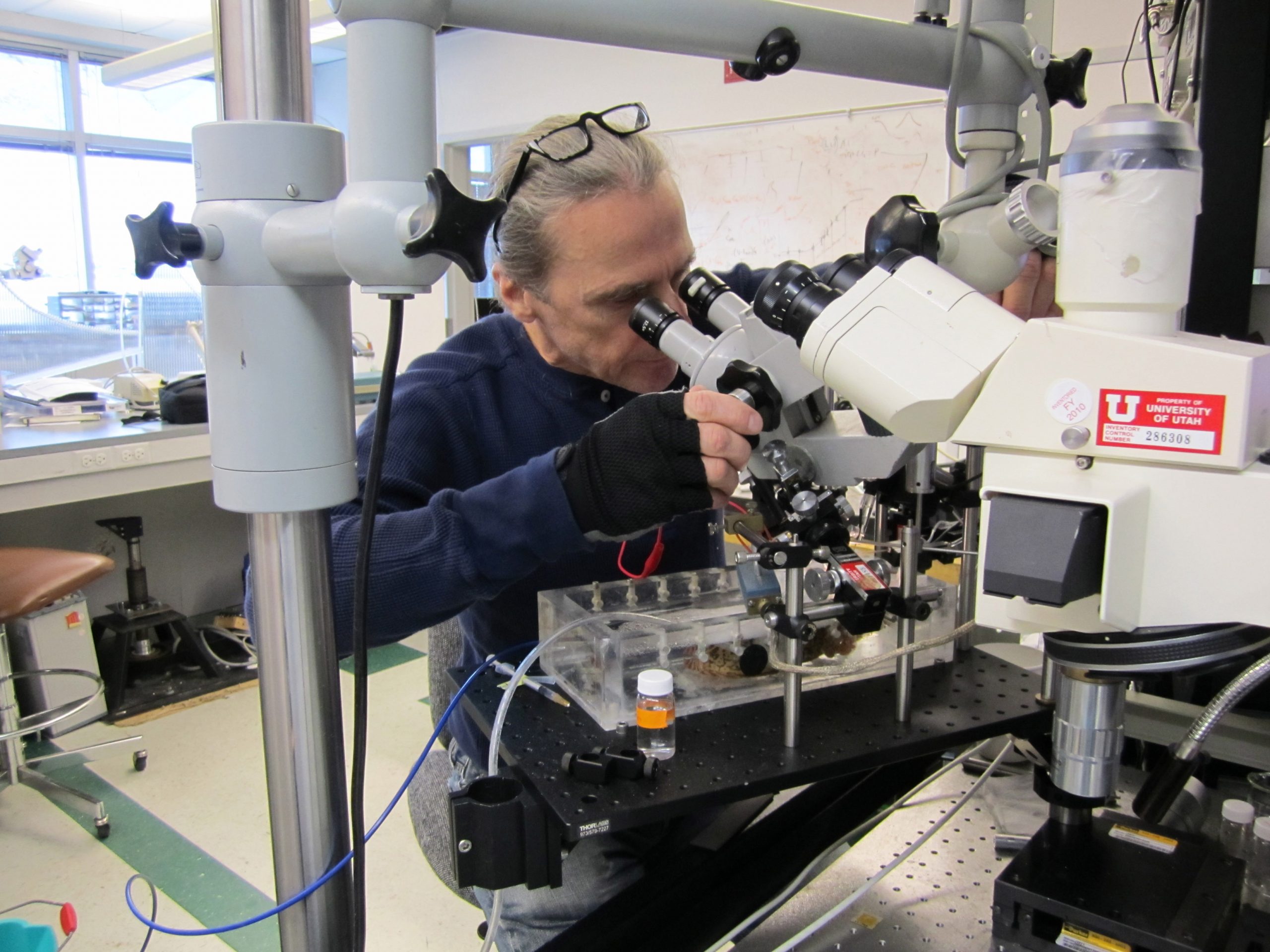 “We’re going to talk to the brain with optical infrared pulses instead of electrical pulses,” which now are used in cochlear implants to provide deaf people with limited hearing, says Richard Rabbitt, a professor of bioengineering and senior author of the heart-cell and inner-ear-cell studies published this month in The Journal of Physiology.

The studies – funded by the National Institutes of Health – also raise the possibility of developing cardiac pacemakers that use optical signals rather than electrical signals to stimulate heart cells. But Rabbitt says that because electronic pacemakers work well, “I don’t see a market for an optical pacemaker at the present time.”

The scientific significance of the studies is the discovery that optical signals – short pulses of an invisible wavelength of infrared laser light delivered via a thin, glass optical fiber – can activate heart cells and inner-ear cells related to balance and hearing.

In addition, the research showed infrared activates the heart cells, called cardiomyocytes, by triggering the movement of calcium ions in and out of mitochondria, the organelles or components within cells that convert sugar into usable energy. The same process appears to occur when infrared light stimulates inner-ear cells.

Curthoys writes that the research provides “stunningly bright insight” into events within inner-ear cells and “has great potential for future clinical application.”

The low-power infrared light pulses in the study were generated by a diode – “the same thing that’s in a laser pointer, just a different wavelength,” Rabbitt says.

The scientists exposed the cells to infrared light in the laboratory. The heart cells in the study were newborn rat heart muscle cells called cardiomyocytes, which make the heart pump. The inner-ear cells are hair cells, and came from the inner-ear organ that senses motion of the head. The hair cells came from oyster toadfish, which are well-establish models for comparison with human inner ears and the sense of balance.

Inner-ear hair cells “convert the mechanical vibration from sound, gravity or motion into the signal that goes to the brain” via adjacent nerve cells, says Rabbitt.

Using infrared radiation, “we were stimulating the hair cells, and they dumped neurotransmitter onto the neurons that sent signals to the brain,” Rabbitt says.

He believes the inner-ear hair cells are activated by infrared radiation because “they are full of mitochondria, which are a primary target of this wavelength.”

The infrared radiation affects the flow of calcium ions in and out of mitochondria – something shown by the companion study in neonatal rat heart cells.

That is important because for “excitable” nerve and muscle cells, “calcium is like the trigger for making these cells contract or release neurotransmitter,” says Rabbitt.

The heart cell study found that an infrared pulse lasting a mere one-5,000th of a second made mitochondria rapidly suck up calcium ions within a cell, then slowly release them back into the cell – a cycle that makes the cell contract.

“Calcium does that normally,” says Rabbitt. “But it’s normally controlled by the cell, not by us. So the infrared radiation gives us a tool to control the cell. In the case of the [inner-ear] neurons, you are controlling signals going to the brain. In the case of the heart, you are pacing contraction.”

Rabbitt believes the research – including a related study of the cochlea last year – could lead to better cochlear implants that would use optical rather than electrical signals.

Existing cochlear implants convert sound into electrical signals, which typically are transmitted to eight electrodes in the cochlea, a part of the inner ear where sound vibrations are converted to nerve signals to the brain. Eight electrodes can deliver only eight frequencies of sound, Rabbitt says.

“A healthy adult can hear more than 3,000 different frequencies. With optical stimulation, there’s a possibility of hearing hundreds or thousands of frequencies instead of eight. Perhaps someday an optical cochlear implant will allow deaf people to once again enjoy music and hear all the nuances in sound that a hearing person would enjoy.”

Unlike electrical current, which spreads through tissue and cannot be focused to a point, infrared light can be focused, so numerous wavelengths (corresponding to numerous frequencies of sound) could be aimed at different cells in the inner ear.

Nerve cells that send sound signals from the ears to the brain can fire more than 300 times per second, so ideally, a cochlear implant using infrared light would be able to perform as well. In the Utah experiments, the researchers were able to apply laser pulses to hair cells to make adjacent nerve cells fire up to 100 times per second. For a cochlear implant, the nerve cells would be activated within infrared light instead of the hair cells.

Rabbitt cautioned it may be five to 10 years before the development of cochlear implants that run optically. To be practical, they need a smaller power supply and light source, and must be more power efficient to run on small batteries like a hearing aid.

Electrical deep-brain stimulation now is used to treat movement disorders such as Parkinson’s disease and “essential tremor, which causes rhythmic movement of the limbs so it becomes difficult to walk, function and eat,” says Rabbitt.

He is investigating whether optical rather than electrical deep-brain stimulation might increase how long the treatment is effective.

“When we get old, we shuffle and walk carefully, not because our muscles don’t work but because we have trouble with balance,” he says. “This technology has potential for restoring balance by restoring the signals that the healthy ear sends to the brain about how your body is moving in space.”

Optical stimulation also might provide artificial vision in people with retinitis pigmentosa or other loss of retinal cells – the eye cells that detect light and color – but who still have the next level of cells, known as ganglia, Rabbitt says.

Hearing and vision implants that use optical rather than electrical signals do not have to penetrate the brain or other nerve tissue because infrared light can penetrate “quite a bit of tissue,” so devices emitting the light “have potential for excellent biocompatibility,” Rabbitt says. “You will be able to implant optical devices and leave them there for life.”