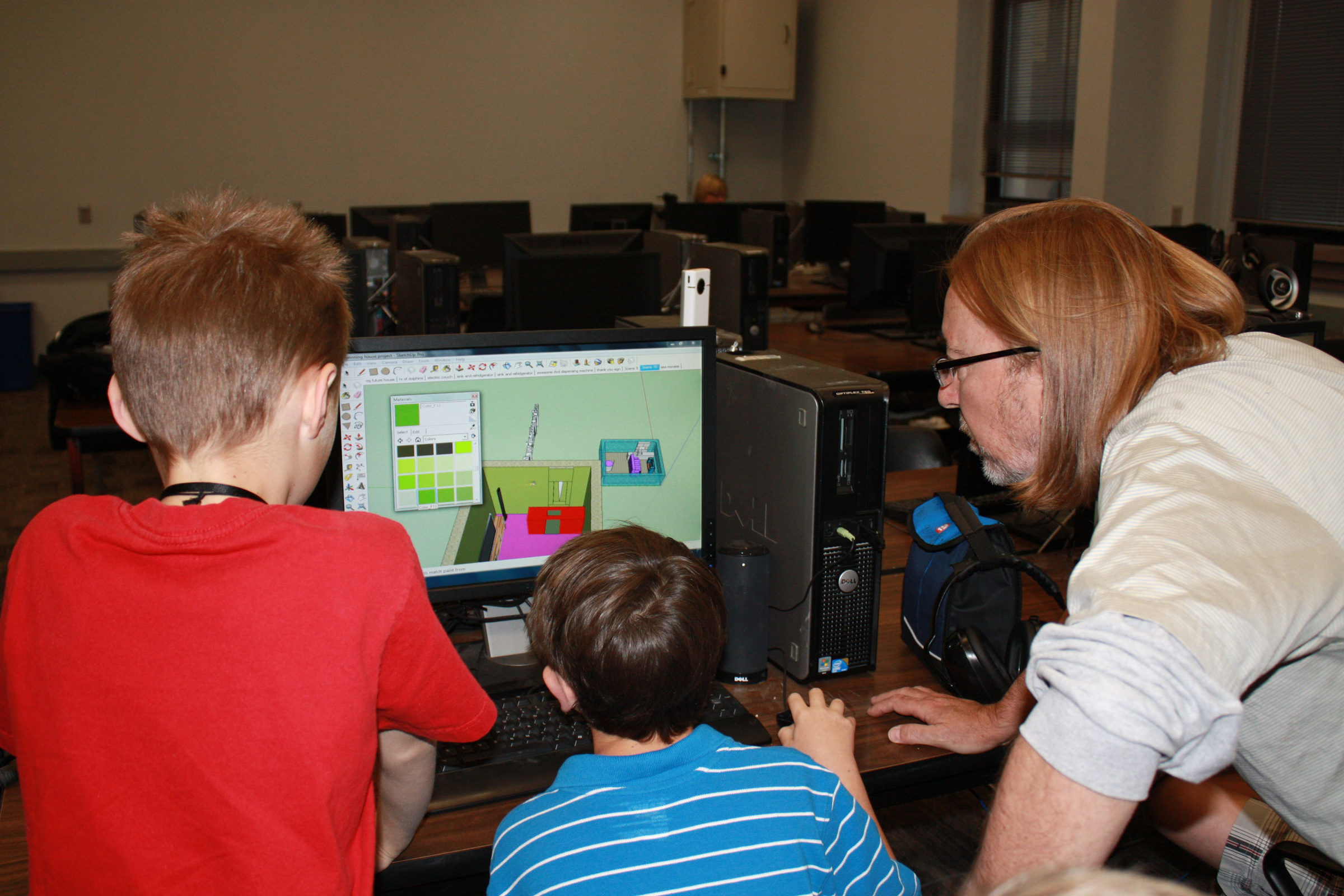 Jan. 10, 2012 – These days, we hear a lot about the disorder of autism, but researchers at the University of Utah have created a program that helps kids with autism focus on building their skills and utilizing an aptitude for visual-spatial thinking, computers and other electronic media.

One of the program participants is 12-year-old Christopher Charles, who was diagnosed with what’s now known as high-functioning autism when he was 18 months old. His parents started him in therapies early on, but hadn’t found something that seemed to hold Christopher’s interest or accommodate his behaviors.

Chris has participated for the past year and a half in workshops at the University of Utah to teach 3D modeling  software by Google called SketchUp. Cheryl Wright, associate professor of family and consumer studies, coordinated the workshops in partnership with Google’s Project Spectrum, an initiative to teach job skills to kids with autism. Steve Gross, a certified SketchUp instructor and designer for Universal Creative theme parks, leads the workshops.

Wright and her team soon found far greater benefits to these workshops than acquiring a skill set for potential employment, however. The sessions facilitated social engagement among the students and their peers, parents, siblings and even grandparents.

They have published a study about these findings in the December issue of Family & Consumer Sciences Research Journal. The study focuses on the effects of the workshops on individual students involved as well as on multiple generations within their families— an uncommon opportunity in the research on social interactions of people with autism spectrum disorders (ASD).

After just weeks in the workshops, Christopher Charles’ parents noticed a big difference. “Christopher spends hours on his design projects,” says his father Nik. “There are few activities that have been able to hold Christopher’s attention like SketchUp.” In fact, Christopher once noted that he wouldn’t miss the SketchUp sessions “even if aliens invaded the Earth.”

Each session was two hours long and included hands-on training in the use of the design program as well as time for students to share their design projects.  At the end of six weeks, the participants, all boys, presented their designs to classmates at their schools and at community events.

“One of the most compelling parts of this program came from when the boys presented their findings to their classmates,” says Wright, who notes that children with autism sometimes struggle in a regular school setting, where their disability is highlighted more than their talents.

“Their talents are often invisible. In our program, we provided a platform for their talents to shine,” she says. Many of the parents of participants were pleased that the workshops had developed self-confidence in their children, and noted that this made the parents more confident about what their children will be able to accomplish in the future.

Parents enrolled their children in the workshops with a bit of skepticism. Like Christopher’s parents, they had experienced prior failures and had found few activities their sons enjoyed. The parents soon noticed that these workshops were different than other extracurricular activities, and seemed to be more aligned with their son’s interests.

In turn, the success of the workshops led to greater self-confidence in parents, who began to rethink what they expected of their parenting ability and began to feel more effective.

They also noticed their sons’ sincere concern about friends in the workshops – something that hadn’t happened in other social interactions. The parents and grandparents who noticed these changes began to feel optimistic that the boys would be able to develop genuine relationships with children and adults in the future.

“Many of the boys were in inclusive, regular educational settings so when they presented to their peers, it was the first time some of their classmates had seen the boys in control of a situation and teaching something the other kids didn’t know,” Wright says.

She uses the example of a 10-year-old in the program who taught his class how to use SketchUp in a 40-minute training session. “It was great; he kept saying, ‘I need to hear from someone else,’ modeling his teacher’s behavior. That modeling is something not always seen in these kids, and it showed their peers that kids with autism can contribute too.”

Chris’ mother Kay notes, “Chris was always off-task, but it’s been amazing to see him develop the ability to stay on task for something, even with different groups of kids, not just in the SketchUp workshops. He is now very comfortable in front of a group of people, and he even will wait his turn to answer questions if he’s with other presenters.”

A second-grader who attended the workshops and who had struggled on a daily basis with attention issues and self-esteem problems was asked about his presentation and he said simply, “It went great. I was awesome.”

Just as an engineer might use SketchUp to design a bridge from one side of a canyon to another, Wright and her team noticed that the SketchUp sessions were building bridges between generations within a family.

“This is a very exciting outcome of this study,” Wright explains. “We were really given a wonderful opportunity to study a different aspect of ASD with the multi-generational model that we used in the workshops.”

The parents of the workshop participants mentioned a greater ability to connect with their child with ASD. As Chris’s father noted, new conversations were sparked in speaking about what they learned and in sharing their designs. “He now teaches me how to do things with SketchUp. The other day, we designed a wall for his bedroom. I don’t see us doing that before the workshops, even if we had the technical ability to use the software.”

Similarly, the boys’ siblings no longer viewed their brother as a source of embarrassment, but as someone who could teach them and others how to use the design tool. “You can just see the pride on his sister’s face when Chris is presenting his work,” Kay says. “She even acts as his assistant sometimes in the presentations. That did not happen before.”

Wright’s program provided many opportunities for grandparents to participate in the workshops. Six grandparents were labeled by the researchers as “active” grandparents and had a particular investment in their grandsons with ASD.

The researchers noticed that the communication between the grandparents of the boys with their adult child (the boys’ parent) increased significantly after the workshops. There seemed to be less shame associated with the child’s autism. One parent noted the grandparents now had something “they could be proud of.”

The researchers explain that grandparents often feel added frustration when coping with a grandchild with autism because they empathize with their own child as well as their grandchild and are concerned about the well-being of both.

A parent of one of the participants said the program gave her parents a renewed hope for her son’s future, and also gave them a forum to discuss their feelings in coping with their grandchild’s ASD.

In October the team presented their research at a Google Tech Talk in Colorado.

“Cheryl and her team have brought an amazing amount of professionalism, data, credibility and excitement to the SketchUp/autism connection and, because of it, people in the larger ASD community are taking note and wanting to learn more,” said Tom Wyman, leader of the SketchUp team in Boulder and business development manager for Google, after their presentation. “We’re excited to be partnering with the University of Utah on this project.”

Wyman says he looks forward to a continuing partnership between Google and the University of Utah’s project, now named iSTAR.

Wright and her colleagues have served 18 students in a school-based version of their program. The researchers surmise that workshops that incorporate familial participation with multiple generations will likely be most successful in affecting the social engagement and computer skill development of the children.

The research team also plans to replicate this program with larger samples of children and incorporate additional types of technology and software. They hope to soon create a virtual community that will provide resources by way of learning tools and a support system for youth with ASD and their families. They have presented their program at national conferences and developed a free teacher-training toolkit so that educators may start a similar program in their own classrooms.

More information about these workshops and resources for parents and teachers of kids with ASD can be found at istar.utah.edu. The complete study by Wright et. al can be found at http://onlinelibrary.wiley.com/doi/10.1111/j.1552-3934.2011.02100.x/pdf

The University of Utah offers a satellite uplink service for live interviews or video feeds about this story. For more information about broadcast services, visit: http://unews.utah.edu/broadcast-services