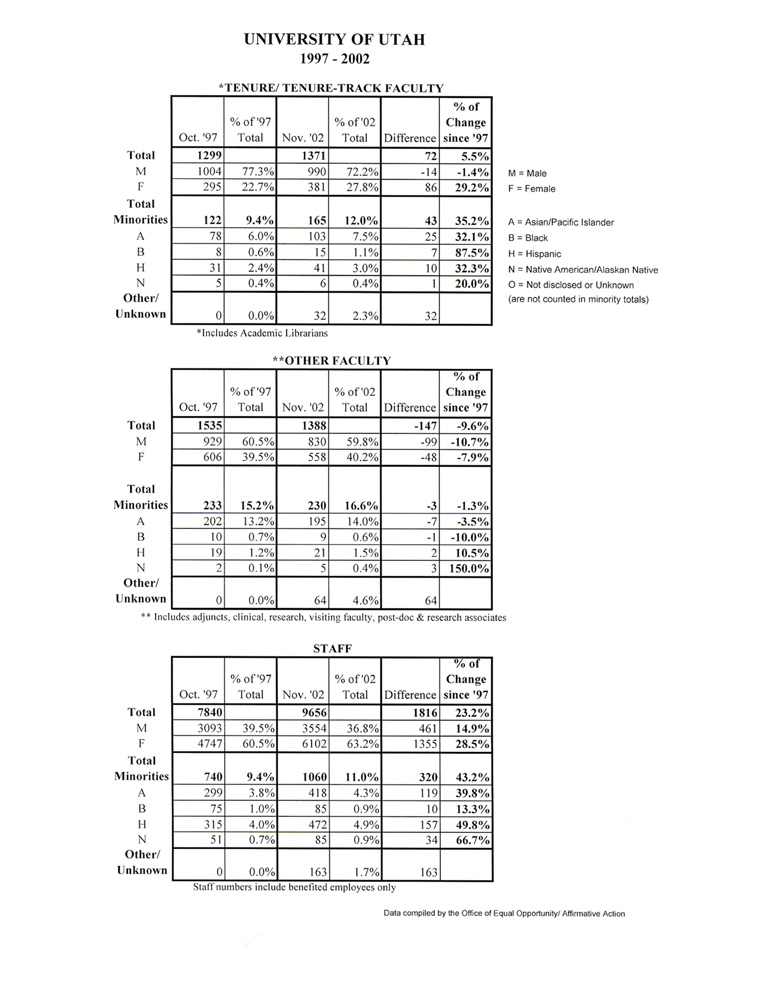 Now, according to figures recently released by the U’s Office of Equal Opportunity and Affirmative Action, progress is being made as diversity is increasing among students, faculty and staff at the U. Specific initiatives, such as diversity programming, the Utah Opportunity Scholarship and the University/Neighborhood Partners project, are credited, in part, for some of the changes.

Over the last five years, the number of minority students attending the U has increased from 1,692 to 2,093, or 23.7 percent. Currently, Asian American and Pacific Islander, African American, Hispanic/Latina-o and American Indian students constitute 7.5 percent of the student population, as compared to 6.7 percent in the fall of 1997.

“We are very pleased that these numbers reflect the U’s efforts to attract students and faculty of different ages, races, beliefs, genders and ethnicities,” notes Machen.

Over the last five years the number of foreign students attending the University has increased 20.7 percent, from 1,529 to 1,845. Currently, foreign students, who come from 106 different countries, constitute 6.6 percent of the student body at the U.

“While there is still much work to be done, the University has made great strides in reaching out to and recruiting underrepresented students or those who may face limited access to educational and career opportunities,” says Suzanne Espinoza, director of student recruitment for the U.

Espinoza notes that University representatives visit local high schools through an ambassador program to meet with diversity students and encourage their enrollment at the U. “We have undergraduate students from ethnic minority groups who meet with students to discuss the importance and value of higher education and the specifics about how students can plan for it. We also work with community leaders to identify eligible students who need to be advised about admission,” she says.

Karen Dace, associate vice president for diversity at the University, also acknowledges the U’s ongoing efforts to reach students who have traditionally been underrepresented. The increase in numbers of minority students may be partly attributable, she says, to the “increased campus-wide awareness of and validation of diverse individuals and groups,” also evidenced in a number of Machen’s initiatives.

Over the past two years Machen has focused on a number of new diversity projects, including increased minority recruitment, scholarship and community outreach initiatives.

In February 2001, Machen announced the formation of The Utah Opportunity Scholarship, which awards 20 underrepresented students in the Salt LakeValley with four-year, $5,000-per-year scholarships and also connects them one-on-one to faculty mentors who will guide them through their university experience. Last year, Machen established the University/Neighborhood Partners project to better link the U to Salt Lake’s west side and to the rest of Salt Lake City. He celebrated the opening of the new ASUU Child Care Center as well as the re-opening of the newly renovated interfaith Post Chapel in Fort Douglas, which he designated as a place of meditation and worship for those of all faiths. (It is rare for a public university to include a chapel of this kind.) In April, Machen attended and spoke at the opening of the University’s Lesbian, Gay, Bisexual, and Transgender (LGBT) Resource Center, which provides information and support to students-and their families and friends.

Says Machen: “The University’s role is to provide a rich, multidimensional education; one that includes not only diversity in thought and discourse, but diversity of people and range of experiences.”