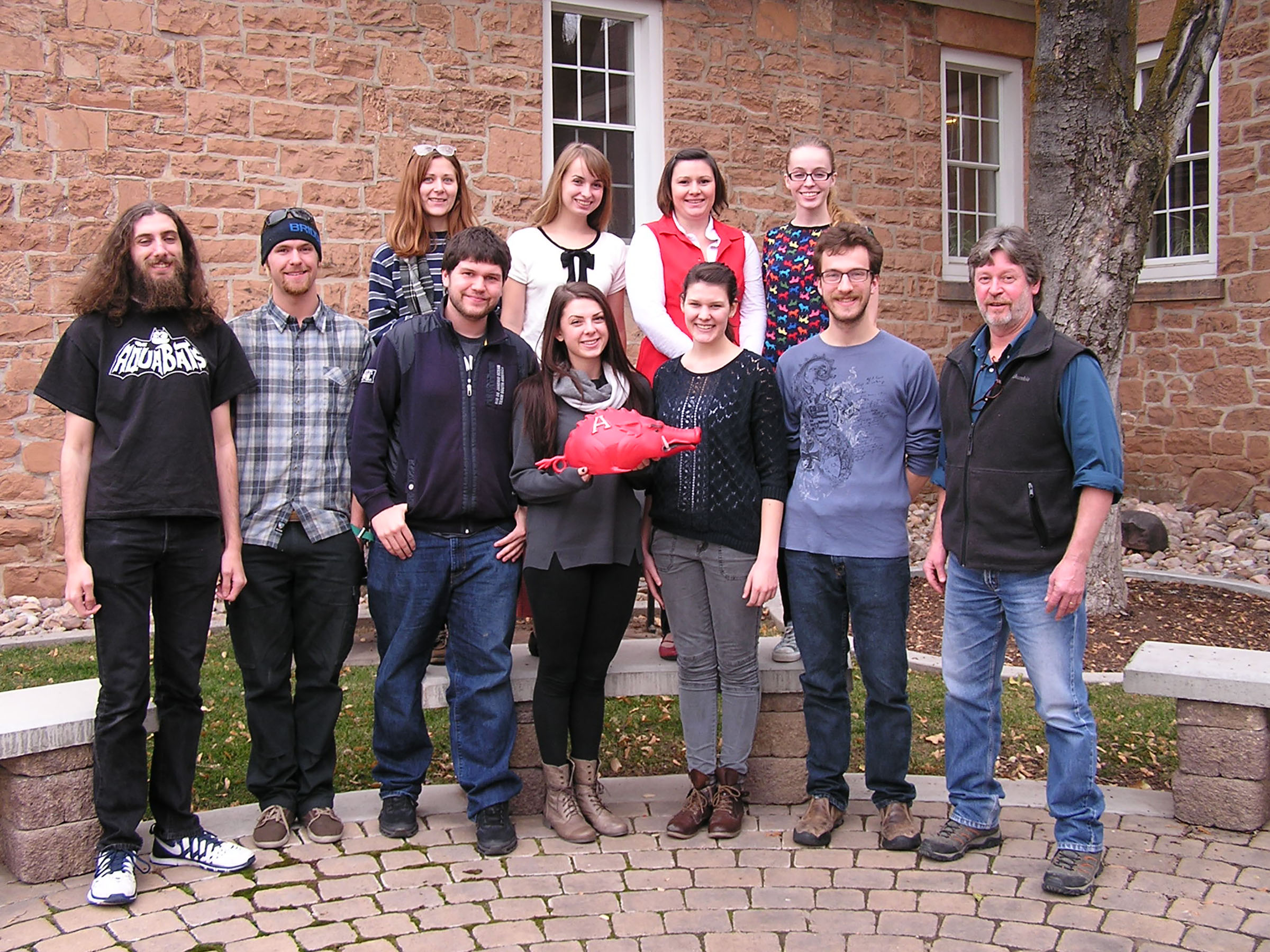 March 10, 2015 —  For most students, having to wake up for class any time before noon is groan-worthy. Now imagine waking up at 4:30 a.m. every single weekday for a year—that’s exactly what 10 students in the University of Utah’s honors novel writing course did—and now they are all on the verge of completing a full-length novel (250-400 pages) at the end of the term.

The first course of its kind in the nation, the yearlong honors novel writing workshop requires students to commit to two to three hours of writing each day and produce 10 pages each week. In addition to writing, students must also read 20 novels during the summer and 10 novels during the academic year.

Michael Gills, a distinguished honors professor at the U and accomplished novelist, led the class on the journey, all while writing his own novel alongside the students.

Gills, who has taught workshops for 25 years, said he has never taught one quite like this.

“I had to create the class from scratch, so I modeled the course after my experience with the writing process,” he said.

That experience includes the sacrifice of waking at 4:30 a.m. every day, five days per week, for 30 weeks to write their novels. In order to be part of the class, each student signed a commitment to do so, and students are required to post on the course website each morning to prove that they are indeed awake and writing.

“Students had to be selected into the course, and out of over 40 applicants, I chose 10. A lot of prospective students turned white as a sheet when they heard that they’d have to get up that early every morning,” Gills said.

Anna Drysdale, one of the students selected for the course, said its structure and system of accountability was necessary for taking on the large feat.

“The best part of the class was that we were all in it together. The support I’ve gotten from other students has been crucial in pushing me to keep going,” said Drysdale.

Trevor Stott, another student in the course, said, “The act of writing a novel comes with a lot of fear: fear of embarrassment, fear of not doing things the ‘right’ way and fear of failure. Coming in, none of us were ready to write a novel, but the workshop forced us into it.”

By working alongside the students to complete his own novel, Gills fostered an honest, open environment and a support structure where students felt the class was like a small family.

“I’m in this class with the students as a fellow writer, not as an authority figure,” said Gills.

Gills emphasized that the class isn’t about competing with each other, but it’s about what each student can press him/herself to do.

Each week, the class meets for three hours to debrief on challenges faced during the writing process, workshop select students’ new pages and discuss assigned reading.

For a class full of students who effortlessly and regularly reference the classic works of Tolkien, Faulkner, Hemingway and the like, the mood is still relaxed as students openly share the week’s successes, pitfalls and enlightenments. Gills also shares his setbacks, such as discovering an entire chapter written in the wrong tense.

“In this class, we all know each other pretty well because the people and events in our novels reflect our own lives. A lot of these things are intimate and difficult to share, so we’ve really opened up to each other. Even the most engaged, traditional class is disengaged compared to this workshop,” said Stott.

In class, Gills encourages each student to “dig themselves to the bone” for inspiration. No story line is too outrageous for consideration; every experience, from coming to terms with grandparents suffering from Alzheimer’s to parasitic screwworms, is encouraged to be woven into the students’ novels.

As much as Gills teaches the students the ins and outs of how to write a novel by covering technicalities such as how to best describe scenery, unite tones, storylines and themes, and develop characters, he also uses the class as a vehicle for students to introspect.

To every student in the class, the evolution of their novel was deeply intertwined with their evolution as a person.

“I can go back and see where I was emotional in my writing,” Drysdale said. “There was a point in my story where my character was sort of trapped. I could have written her out of any situation since it’s all fiction, right? But it wasn’t until I matured as a person that I had the clarity to write my character out of her predicament. I discovered the person that I want to be by writing the person I didn’t want to be.”

Of the class environment and his experience, Stott said, “You’re in a creatively rich place where you’re actually creating something that’s important to you and progress as a person.”

“This was one of the most transformative experiences of my life,” Drysdale said. “I’ve learned more from this class about being human and what it means to live than I ever have at all of my years at the U combined.”