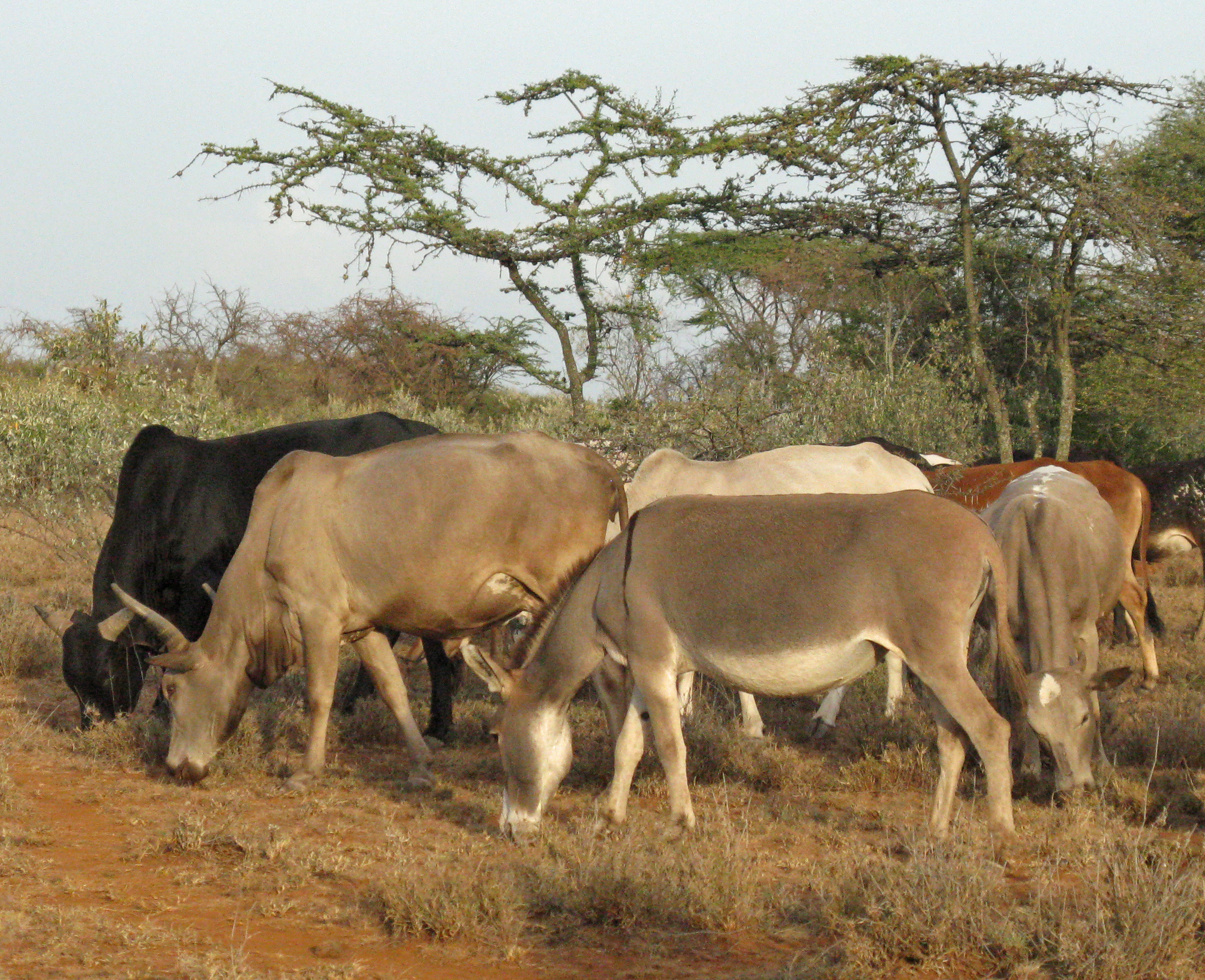 Embargoed by Proceedings of the National Academy of Sciences for release at 1 p.m. MST Monday, March 9, 2014

March 9, 2015 – A University of Utah study of nearly 2,000-year-old livestock teeth show that early herders from northern Africa could have traveled past Kenya’s Lake Victoria on their way to southern Africa because the area was grassy – not tsetse fly-infested bushland as previously believed.

“We studied the chemical signature of teeth in wild antelopes and domestic plant-eating animals – cows and sheep or goats – and found they all were eating a lot of grass in the Lake Victoria Basin,” says Kendra Chritz, first author of the study published online this week in the journal Proceedings of the National Academy of Sciences.

“That means Lake Victoria could have been an area through which people passed while migrating southward to southern Africa,” adds Chritz, a paleoecologist and University of Utah doctoral student in biology.

“The route people took on this southward migration has been a mystery, but recent genetic evidence supports that people moved from east Africa to southern Africa about 2,000 years ago,” she says. “The specific route out of Kenya has been debated.”

“It was thought that Lake Victoria wasn’t part of the route because of a natural barrier – namely, a cool, moist, bushy environment filled with tsetse flies that would have infected humans and livestock with African sleeping sickness, which can be fatal.”

Researchers study the issue because the transition to herding livestock from hunting, fishing and gathering transformed human populations, the researchers say.

“Food production led to modern human society,” Chritz says. “Food production may have helped change our way of living – like building cities and having a political system with a central governing body.”

Understanding how early herders spread through Africa “gives us perspective on how we transformed from relying on the landscape for support to actively providing for our livelihood and controlling for uncertainties in the environment that might have starved us,” she adds.

Chritz conducted the research with University of Utah geochemist Thure Cerling, the senior author, who now is doing field work in Africa, and with M. Esperanza Zagal, an undergraduate in chemistry and anthropology. Other co-authors were archaeologist Fiona Marshall, of Washington University in St. Louis, and Francis Kirera, a paleontologist at Ross University School of Medicine in Miramar, Florida.

The study was funded by the National Science Foundation, Geological Society of America and the University of Utah’s Global Change and Sustainability Center.

The birth of African livestock herding

Starting sometime between 8,000 to 9,500 years ago, domestic animals began appearing in Egypt and the eastern Sahara Desert, possibly because changes in the environment forced human foragers and hunters to pick a food-production strategy to survive, Chritz says.

Once humans began herding – mostly goats, sheep and cattle – “slowly we see domestic animals start moving eastward and southward through Africa,” she adds. “They appear in east Africa 4,500 years ago. We see them in Kenya about 4,500 years ago, in southwest Kenya’s Lake Victoria basin by 3,500 years ago and in southern Africa [Botswana and South Africa] about 2,000 years ago.”

“We know they reached southern Africa,” Chritz says. “The question has always been the route. Eastern Africa is one possibility [including past Lake Victoria or farther east, near Kenya’s eastern coast]. Another one is through central and western Africa, down through Angola, Namibia and then into southern Africa.”

The people who traveled through western Kenya were known as Elmenteitan herders, named after Lake Elmenteita, about 70 miles northwest of modern-day Nairobi. They still got some food from hunting, particularly antelope, but “they relied 90 percent on their domestic animals for food” beginning some 3,000 years ago, Chritz says.

Human genetic evidence indicates they traveled through Kenya’s Great Rift Valley on their way south to the 75,000-square-mile Lake Victoria Basin, which today includes parts of Kenya, Uganda and Tanzania.

(When the Elmenteitans arrived, the area was occupied by ceramic-using people who fished, were mostly hunter-gatherers but maintained some livestock, Chritz says.)

The researchers studied fossil teeth of various animals that had been collected at a site on the east side of Lake Victoria known as Gogo Falls, on the Kuja River. Earlier research indicates herders were there less than 2,000 years ago.

The Elmenteitan herders at Gogo Falls “have always been unusual because they only relied about 50 percent on domestic animals, with the rest hunting and fishing,” Chritz says. “The assumption was that due to some sort of environmental constraint, they weren’t able to maintain large herds of domestic animals. The specific assumption relates to the presence of the tsetse fly, which carries African sleeping sickness or trypanosomiasis. This is fatal to cattle, goats, sheep and people. It’s very difficult to maintain livestock where there are abundant tsetse flies.”

The idea that a wet, bushy and woody tsetse-infested environment forced Gogo Falls residents to hunt and fish for almost half their food persisted even though other Elmenteitan archaeological sites east of Lake Victoria contain evidence that people there depended on livestock for 90 percent of their food supply.

The new findings mean people at Gogo Falls “weren’t forced to hunt and fish by their environment,” or at least by a bushy tsetse-infested environment, Chritz says. “They chose to do it, or had to do it for some other reason, like social or political pressures.”

A study of animals long ago at Gogo Falls

Chritz spent two months in 2013 in Nairobi, analyzing 86 fossil teeth excavated from the ancient ash of cooking fires at the Gogo Falls site in 1986 and stored at the National Museum of Kenya. The teeth came from caprines, which are sheep or goats – the researchers don’t know for sure because the teeth are similar – and from cows, various species of large and small antelopes, zebras, hippos, warthogs and bushpigs.

To avoid damaging the teeth, they removed only 1-milligram samples of tooth enamel from already broken tooth edges. Chritz analyzed stable isotopes, which are forms of elements that do not decay radioactively.  They determined the ratios of heavier, rarer carbon-13 to lighter, common carbon-12.
Those carbon-isotope ratios indicate whether an animal ate what are called C3 plants, which include leafy trees, shrubs, forbs and herbs, or C4 plants, which include grasses and sedges. Higher carbon-13-to-carbon-12 ratios indicate a C4 grassy diet.

The results indicate that at Gogo Falls, the cows and sheep or goats – as well as the majority of wild animals – ate a grassy diet. (Cows, goats and sheep don’t eat sedges.) That is consistent with studies of old pollen and leaf wax from lake sediments that also suggested the Lake Victoria Basin had a grassy landscape, Chritz says.

The scientists found that 10 of the 13 species of wild and domestic animals ate a diet of more than 80 percent grass – cows and caprines ate almost a pure grass diet – while bush pigs and large and small forest antelopes ate less than 80 percent grass, but still “far more than in a modern environment,” Chritz says. She believes the caprines were sheep, not goats, because goats would tend to browse on C3 shrubs and leaves.

Chritz says it isn’t necessarily true that grasslands near Lake Victoria developed naturally and attracted herders, but that “it may have been the other way around. They may have maintained the environment to keep it grassy” by using grazing – as the Maasai people do today in southwest Kenya and northern Tanzania – and/or with fire.

She notes the area around Lake Victoria is much different today than it was 2,000 years ago, largely due to overgrazing of grasses by livestock and to increasing bushiness as humans kill or relocate giraffes and elephants in the area.