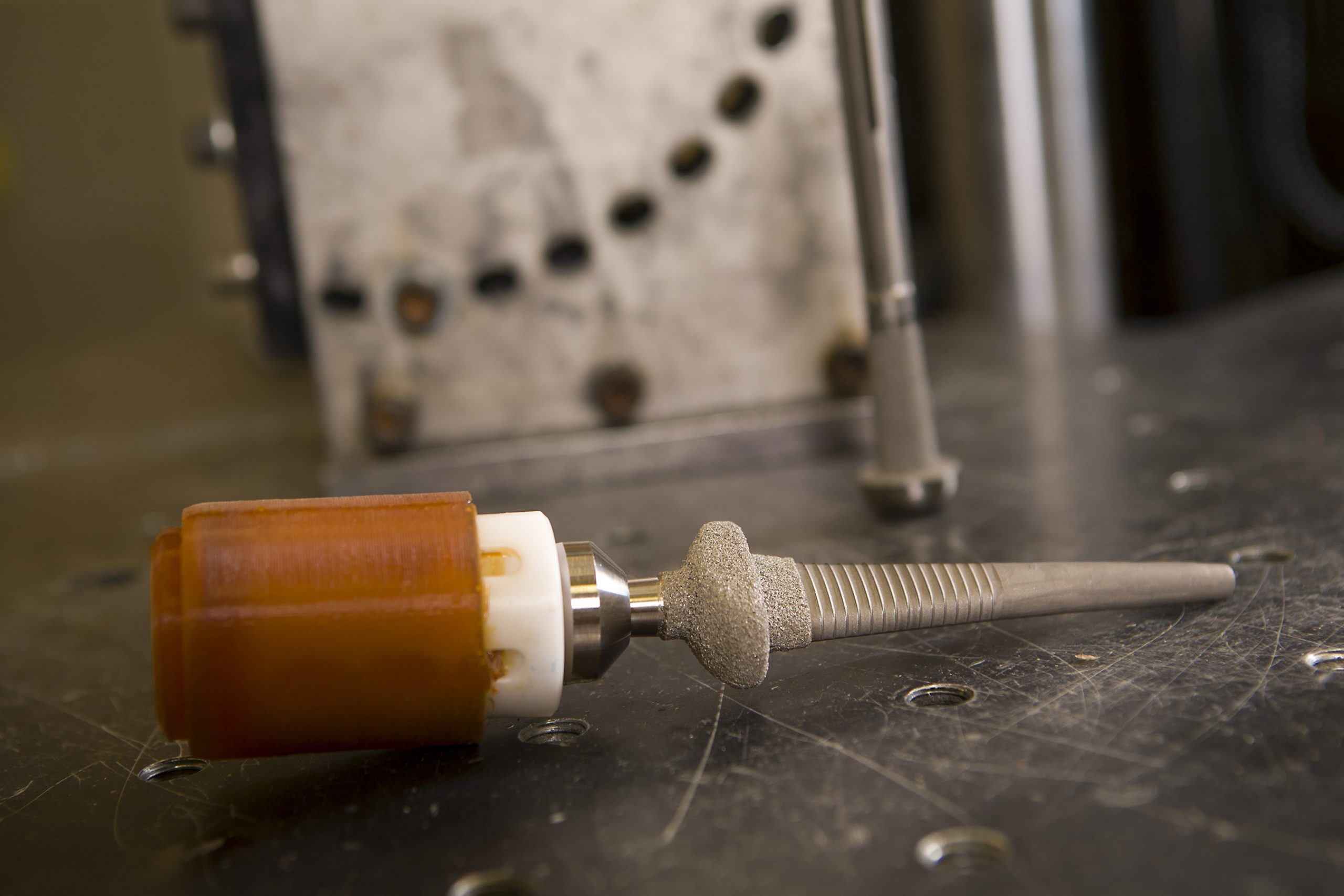 July 26, 2012 — Thousands of veterans and warfighters returning to the U.S. suffer with limb amputations, and for many, standard prosthetics are not an option. Skin issues or short remaining-limb length can cause amputees to forgo the typical socket-type attachment systems.

A team of researchers and surgeons from the University of Utah and the George E. Wahlen Department of Veterans Affairs (VA) Medical Center in Salt Lake City hope to provide an alternative solution via osseointegrated direct skeletal attachment of prosthetic limbs for these veterans and the many others with a similar condition. For the last six years, this team has been developing a device that can be implanted directly into a person’s residual bone, passing through the skin, so they can securely attach a prosthetic limb without the need for a socket.

“We are trying desperately to provide relief to the many veterans who have lost a limb,” says Roy Bloebaum, professor of orthopaedics at the University of Utah and the director of the VA Bone and Joint Research Lab. “Most of these people are very young and have many years to live. Our goal is to give them back all of the abilities they had before they were injured.”

Nothing like it has been done at a U.S. hospital, and the procedure has only been attempted an estimated 250 times worldwide in Europe and Australia, with mixed results.

Their research recently hit two milestones. One was a partnership with DJO Surgical, a global developer, manufacturer and distributor of medical devices, which has licensed the implant technology and is assisting with the remaining research and development. The other milestone was being accepted into a new Food and Drug Administration program that allows them to design a human early feasibility study. DJO Surgical applied for the FDA study and is responsible for managing its implementation.

The early feasibility study will last up to three years. During that time, the clinical research team will implant their device into 10 patients. A unique element will be the ability to develop and refine their device between operations, which should accelerate the overall refinement process by compressing the development cycle.

“We have already addressed some of the major research challenges with osseointegrated implant devices” Bachus says.

Researchers studying these implants have faced three fundamental problems – getting the bone to grow into the device, preventing infection and determining how to address the skin interface.

Researchers believe they have already addressed most of these problems, as the solutions lie in the design of their device and the materials used. Specifically, the titanium device is integral to its success because it is coated with a porous titanium material called P2 (P squared), which is a proprietary coating that is owned by DJO. Skin and bone grows into the material, forming a secure bond.

Bloebaum, Bachus and Beck still have a long way to go before U.S. hospitals will be offering their implant prosthesis. They are currently working to secure $5 million in grants and partnerships like the one with DJO.

“We are excited to sign this partnership agreement with the University of Utah and Dr. Bloebaum,” says Bryan Monroe, DJO’s senior vice president and general manager of DJO Surgical. “With the combination of our proprietary titanium P2 porous coating and Dr. Bloebaum’s unique approach for percutaneous osseointegrated prosthesis, we believe that we have developed a winning solution that will have a monumental impact on the lives of amputees.”