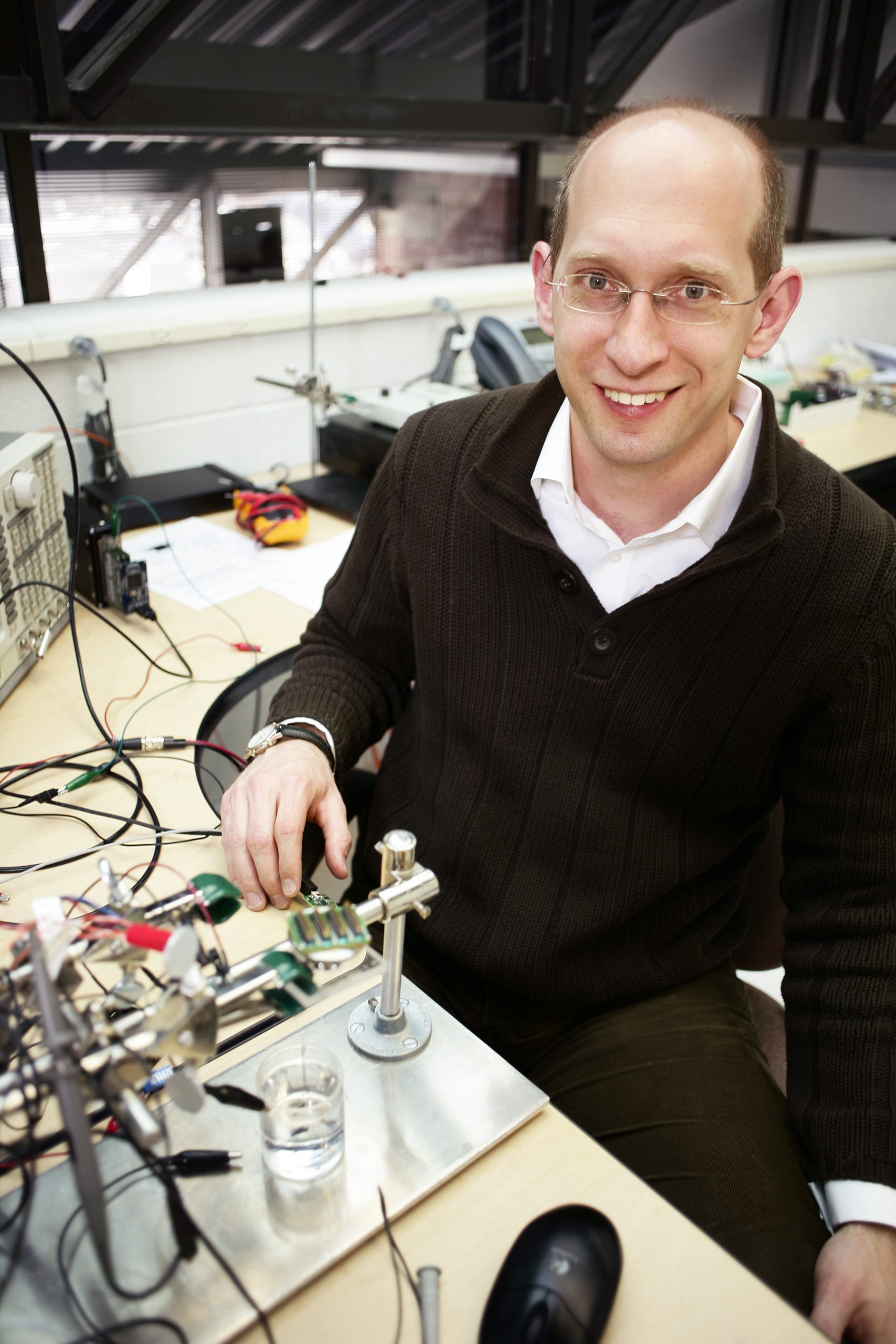 May 1, 2012 — What do neuronal communication devices, insect-inspired body suits that give humans super strength, and a multi-media performance laboratory to encourage intimate experiences through dance, media and technology have in common? Not much, except that each was invented by University of Utah (the U) professors Florian Solzbacher, Stephen Jacobsen and Ellen Bromberg, winners of this year’s Distinguished Innovation and Impact Award (DIIA). The U presents these annual awards at commencement to recognize and honor faculty whose research has made a positive impact on the world.

“We are delighted to recognize these faculty members for innovations that have had profound impact on the world at large,” said Glenn Prestwich, presidential professor of Medicinal Chemistry at the U and presidential special assistant for faculty entrepreneurs. “The DIIA was initiated in 2010 in recognition that you get excellence in what you reward. This award places innovation and positive impact on people’s lives on a par with excellence in teaching and in creative and scholarly research.”

Innovation is second-nature for the DIIA winners. Solzbacher, for instance, is a professor in the Electrical and Computer Engineering Department who founded Blackrock Microsystems, a company enabling researchers to make advancements in neural engineering and prosthetics. “The award is unexpected, but a wonderful recognition of the translational, commercialization and dissemination work that we have been doing over the past eight years, culminating in the creation of two companies in the neuroscience field,” Solzbacher said.

If successful, those companies will offer new therapeutic approaches to helping patients with nervous system disorders (such as blindness, deafness, incontinence, spinal cord injuries, Parkinson’s disease, chronic pain, depression and epilepsy). Since joining the U, Solzbacher has published three book chapters, 40 journal papers, 67 conference papers and 54 abstracts. He has also had 22 invention disclosures that have led to 16 patents.

Remember the Iron Man movie? Jacobsen, a distinguished professor in the Department of Mechanical Engineering, founded Sarcos, a company based at the U that creates robotic suits that give people superhuman capabilities. Jacobsen has been at the forefront of robotic and prosthetic technology for decades. In 1980 he produced the Utah Arm, a prosthetic limb that gives the user precise and sensitive control over both the hand and elbow. His robotic inventions orchestrate the Bellagio fountains in Las Vegas and provide the functionality behind many Disney and Universal Studios theme park rides.

“I am always extremely thankful for the wonderful team and sponsors we had on all of our projects,” says Jacobsen. “It doesn’t happen in a vacuum,”

Jacobsen’s impact has been recognized through many national and state awards. He was elected to the National Academy of Engineering, the Institute of Medicine and the National Academy of Orthotists and Prosthetists. He won the Leonardo Da Vinci Award from the American Society of Mechanical Engineers, the Pioneer of Robotics Award from the Institute of Electrical and Electronic Engineers, and the Utah Governor’s Medal for Science and Technology. In January, Jacobsen received one of five “Most Prolific Inventor Awards” by the U’s Technology Commercialization Office for having more than 200 inventions. He has founded many centers and companies: the Center for Engineering Design at the U, Motion Control (the company evolved into Iomed), Sarcos (now Raytheon‐Sarcos), Micro‐Drugs, Eye‐Port, Micro Ject, Precision Vascular, Intelligent Microinfusion, Sarcos Microsystems, and Sterling Technologies. In addition, Jacobsen has managed 359 research projects and employed more than 200 Utahns in his companies.

In an entirely different field, Bromberg, a faculty member in the Department of Modern Dance, is leading the way in cinema-based dance experience. She single-handedly garnered funding to build a multimedia performance laboratory that allows faculty and students to explore new ways to create a meaningful visual experience for people watching dance on a screen. Bromberg has given back to her students in other ways, namely, giving them the chance to explore distance dance collaboration. She gathered more than $90,000 in grants to create the technological infrastructure for the Association for Dance and Performance Telematics (ADaPT), an interface that connects dancers from Utah with others around the world to foster artistic collaboration in a real-time setting.

“This award means a great deal to me on so many levels. First and foremost is the acknowledgement that the arts are innovative and impactful,” Bromberg said. “As someone who has been working in the arts for many years and in many different contexts, I have been privileged to both witness and experience how transformative aesthetic experiences can be so profound. Their impact can change lives, deepen understanding, challenge perceptions and assumptions, and illuminate our humanity.”

Bromberg’s pioneering work in “screen dance” has been shown in locations as diverse as Amsterdam, Hanoi, Hong Kong, Burgundy, Istanbul, Buenos Aires, Victoria, Montevideo, Regina and Melbourne. For her work in the arts, Professor Bromberg has received multiple honors and awards, notably a Guggenheim Fellowship Award in 2006, for those who have already demonstrated exceptional capacity for productive scholarship or exceptional creative ability in the arts.

“These faculty members exemplify the entrepreneurial spirit at the University of Utah,” said Prestwich. “Our faculty and students are part of a culture of impact, and the U is a trendsetter and leader in the translation of research and creativity into products that truly make a difference in the lives of people.”

Learn more about innovation and technology commercialization at the U at www.techventures.utah.edu.