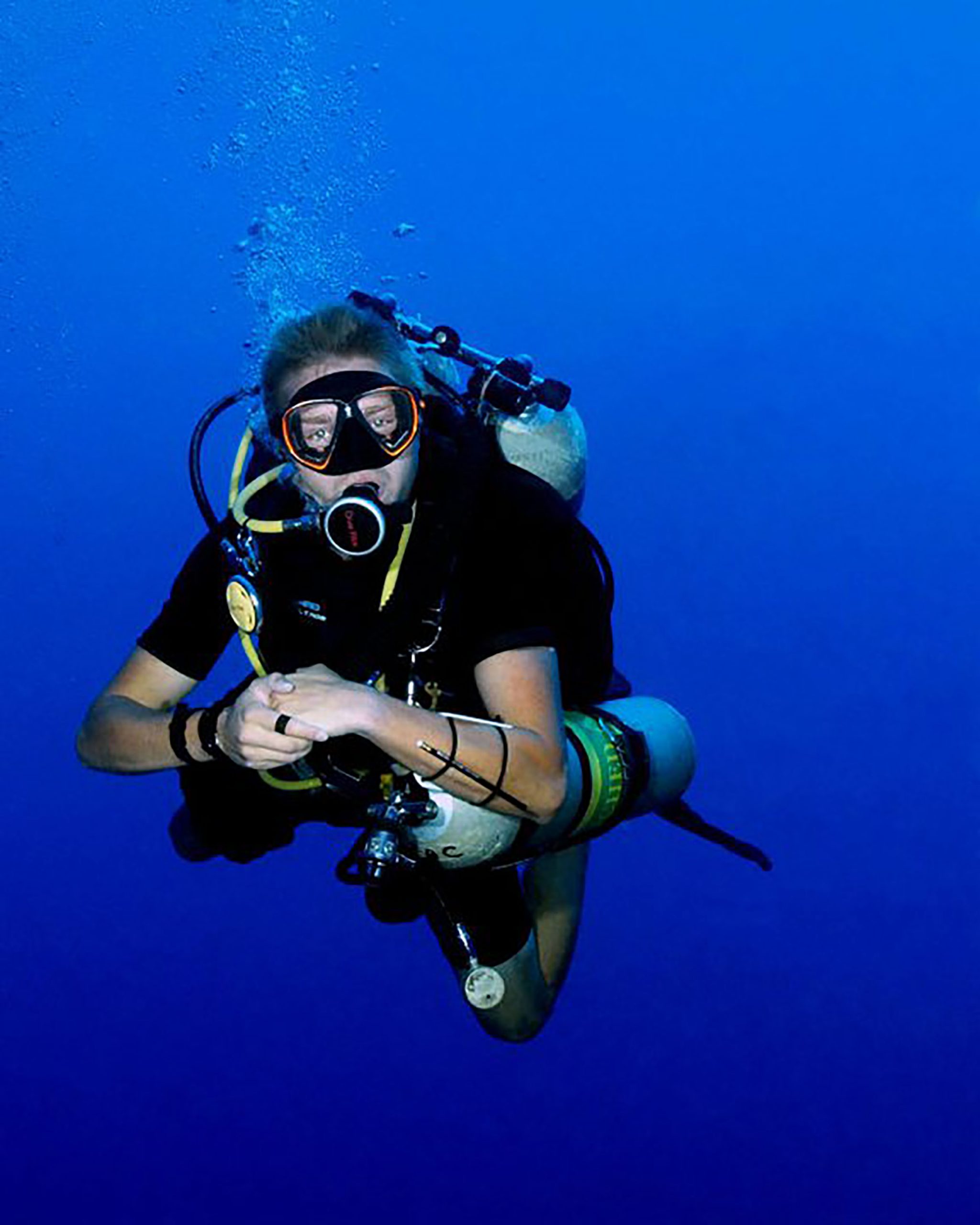 Feb. 6, 2015—Former naval aviator and military officer, University of Utah geoscience alumnus, world traveler, outdoors enthusiast, business owner, deep-sea diver and climate change educator. These are a few of the many hats worn by U alumnus Zac Bowland, who is on the cusp of embarking on a journey across  eight countries in hopes of developing a new technique for diving in extreme environments and collecting essential data on climate change. Bowland will discuss his endeavors at a visiting alumnus lecture at the Marta Sutton Weeks Lecture Hall, 295 FASB, on Thursday, Feb. 12 at 12:15 p.m.

Prior to joining the U, Bowland spent his post-high school years serving in the U.S. Navy as a helicopter test-flight crew chief and airborne mechanic. Due to his excellent performance, he was meritoriously promoted to become an aviation officer, which requires a technical degree. While on active duty, Bowland attended the U for a degree in geoscience with an emphasis in geophysics. Upon graduation in 2009, he was commissioned as a mustang naval officer.

After more than eight years of military service, Bowland decided to travel the world to gain clarity on his life’s purpose. He condensed his life into a backpack to travel around the world and while in Utila, Bay Islands, Honduras, he discovered scuba diving and was immediately hooked. Bowland spent the next three months there diving and met his future wife Kate. They soon after moved to Canada, where Kate is a native, for commercial dive training. Bowland completed a yearlong deep-sea diver training program at Seneca College’s Underwater Skills Program and worked in an isolated little fishing/surfing village after graduation.

After logging more than 350 dives in his first year alone, Bowland became interested in pushing the limits of diving. After seeing Felix Baumgartner’s Red Bull Stratos space jump in 2012, Bowland began aggressively researching what an equivalent feat would be in diving.

“Generally, the upper limits of altitude diving are limited to 8,000-10,000 feet above sea level The highest lakes in the world are up to 19,500 feet. When I started researching diving at such high altitudes, I found startlingly little information,” said Bowland.

Intrigued by this gap of knowledge in how high altitude diving can be safely performed, Vanguard Diving & Exploration, Inc. (VDEx) and the Steep N’ Deep Project were born with the initial goal of performing the first-ever extreme altitude research diving operations on each continent’s highest lake.

In order to accomplish such a feat, the team must determine how to safely and effectively dive in extreme environments. After all, no one had ever done it before. As the expeditions are underway, one of VDEx’s key goals will be to pioneer isolation diving, a technique of underwater exploration in unstable conditions.

The project’s goals soon evolved, however, after Bowland discovered the phenomenon known as glacial lake outburst flooding (GLOF), which occurs when water dammed by a glacier is suddenly released. As warming trends continue, melting glaciers form more and more high altitude lakes that can potentially burst and wash out entire communities 40-50 miles downstream.

“I learned that there are thousands of these lakes and we don’t really know which ones are most likely to burst. Very little is known about what is going on below the water surface,” said Bowland.

Currently, surface teams use ground-penetrating radar to analyze moraines, or accumulations of glacial debris such as soil and rock, that trap meltwater. There is limited data, however, on what lies below these moraines. That’s where Bowland and his team come in.

VDEx is a member of the High Mountains Adaptation Partnership, which will help to network their findings throughout the GLOF-studying community, as well as with relevant United Nations groups working to mitigate climate change disasters.

Bowland hopes that the Steep N’ Deep Project will serve another purpose in addition to developing isolation diving and collecting vital data on glacial lake systems: educate the public on science and the importance of taking action.

“We want to emphasize that the team is a collection of private citizens taking responsibility for the welfare of our ecosystem. Modern society’s disconnection from the natural world has led many to forget that we our well-being depends on the planet’s well-being,” said Bowland.

“We’re not going to wait to for someone else to fix this situation for us, so we’re taking matters into our own hands.”