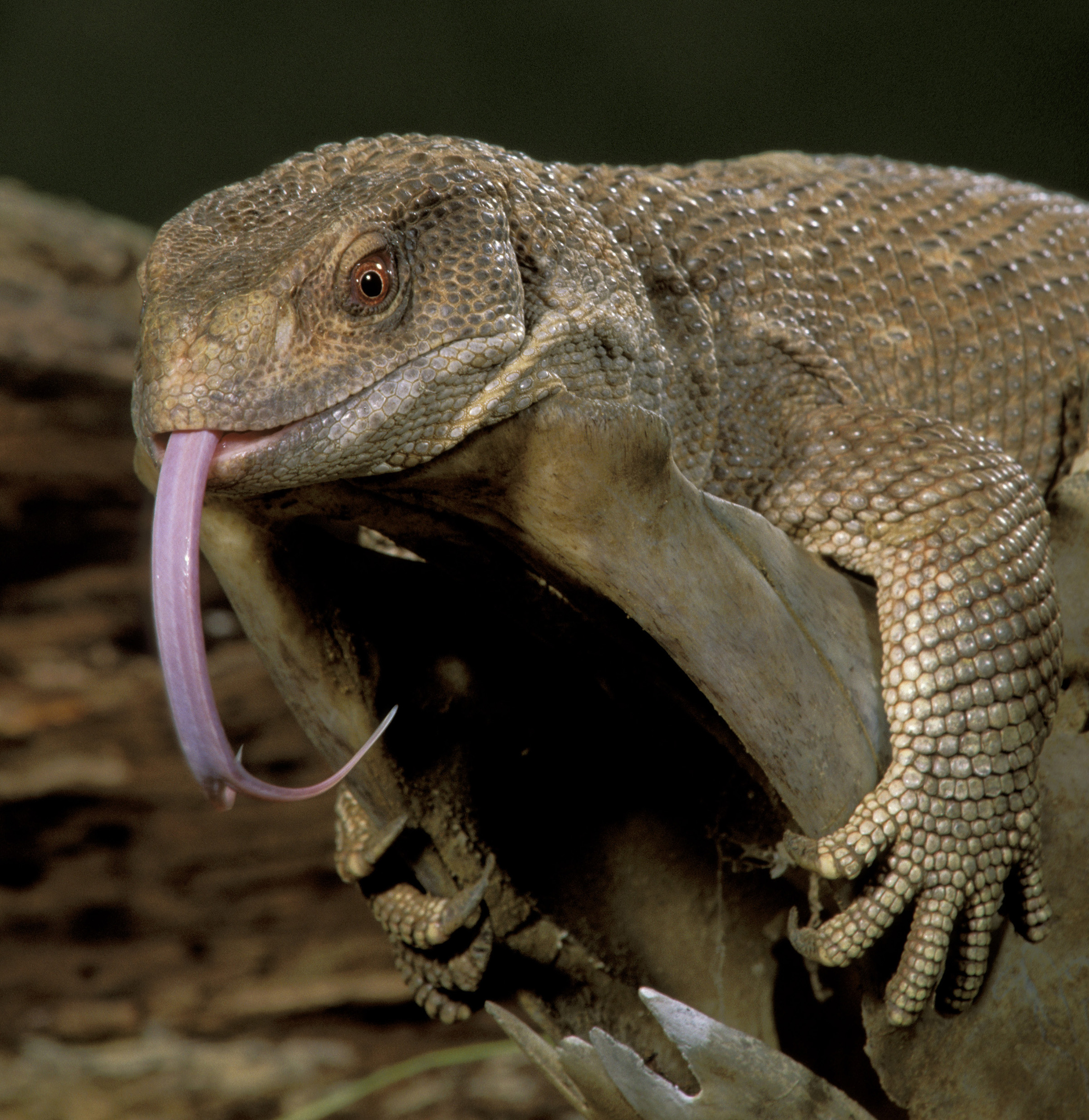 Dec. 11, 2013 – Air flows mostly in a one-way loop through the lungs of monitor lizards – a breathing method shared by birds, alligators and presumably dinosaurs, according to a new University of Utah study.

The findings – published online Wednesday, Dec. 11 in the journal Nature – raise the possibility this breathing pattern originated 270 million years ago, about 20 million years earlier than previously believed and 100 million years before the first birds. Why remains a mystery.

“It appears to be much more common and ancient than anyone thought,” says C.G. Farmer, the study’s senior author and an associate professor of biology at the University of Utah. “It has been thought to be important for enabling birds to support strenuous activity, such as flight. We now know it’s not unique to birds. It shows our previous notions about the function of these one-way patterns of airflow are inadequate.  They are found in animals besides those with fast metabolisms.”

But Farmer cautions that because lizard lungs have a different structure than bird and alligator lungs, it is also possible that one-way airflow evolved independently about 30 million years ago in the ancestors of monitor lizards and about 250 million years ago in the archosaurs, the group that gave rise to alligators, dinosaurs and birds. More lizard species, such as geckos and iguanas, must be studied to learn the answer, she says.

The research was funded by the American Association of Anatomists, the American Philosophical Society, the National Science Foundation and private donor Sharon Meyer.

Tidal Versus One-Way Airflow in the Lungs

Humans and most other animals have a “tidal” breathing pattern: Air flows into the lungs’ branching, progressively smaller airways or bronchi until dead-ending at small chambers called alveoli, where oxygen enters the blood and carbon dioxide leaves the blood and enters the lungs. Then the air flows back out the same way.

Birds, on the other hand, have some tidal airflow into and out of air sacs, but their breathing is dominated by one-way airflow in the lung itself. The air flows through the lung in one direction, making a loop before exiting the lung.

In 2010, Farmer published a study showing that a mostly one-way or “unidirectional” airflow controlled by aerodynamic valves exists in alligators. That means the breathing pattern likely evolved before 250 million years ago, when crocodilians – the ancestors of alligators and crocodiles – split from the archosaur family tree that led to the evolution of flying pterosaurs, dinosaurs and eventually birds.

The new study found a mostly one-way, looping air flow in African savannah monitor lizards, Varanus exanthematicus – one of roughly 73 species of monitor lizards – although there was some tidal airflow in regions of the lungs. That means one-way airflow may have arisen not among the early archosaurs about 250 million years ago, but as early as 270 million years ago among cold-blooded diapsids, which were the common, cold-blooded ancestors of the archosaurs and Lepidosauromorpha, a group of reptiles that today includes lizards, snakes and lizard-like creatures known as tuataras.

One-way airflow may help birds to fly without passing out at high altitudes, where oxygen levels are low. Before the new study, Farmer and others had speculated that the one-way airflow may have helped dinosaurs’ ancestors dominate the Earth when atmospheric oxygen levels were low after the Permian-Triassic mass extinction – the worst in Earth’s history – 251 million years ago.

“But if it evolved in a common ancestor 20 million years earlier, this unidirectional flow would have evolved under very high oxygen levels,” she says. “And so were are left with a deeper mystery on the evolutionary origin of one-way airflow.”

As in her earlier research on alligators, Farmer and colleagues demonstrated predominantly one-way airflow in the lungs of monitor lizards in several ways. They performed CT scans and made 3-D images of lizard lungs to visualize the anatomy of the lungs. They surgically implanted flow meters in the bronchi of five monitor lizards to measure airflow direction.

Using lungs removed from 10 deceased lizards, the researchers measured air flow as they pumped air into and out of the lungs. They also pumped water laden with sunflower pollen particles or plastic microspheres through lizard lungs, and the movement of the pollen and spheres also showed the unidirectional airflow.

Savannah monitor lizards were used in the research because they are relatively large and thus easier to study, weighing about a pound and measuring roughly 15 inches from head to tail tip. Monitor lizards also have some of the highest rates of oxygen consumption, partly because they breathe using not only their trunk muscles and ribs, but also using “gular pumping,” which is when the lizards flare out their throat and pump air into their lungs.

Monitor lizards’ lungs have more than a dozen chambers or bronchi in each lung. The primary airway runs the length of the lung, with lateral bronchi branching off of it.

The study showed that air enters the lizard’s trachea or windpipe, then flows into the two primary airways, which enter the lung. But then, instead of flowing tidally back out the same way, the air instead loops back in a tail-to-head direction moving from one lateral airway to the next through small perforations between them.

The walls containing perforations that allow air to flow from one chamber to the next “are like lace curtains,” Farmer says.

There appear to be no mechanical valves or sphincters, so the one-way airflow appears “to arise simply from jetting,” or aerodynamic valves created when air flows around bends within the lung airways. That is supported by the fact that one-way airflow was observed even in lungs removed from dead lizards.

A 60-megabyte movie of CT scans of a lizard’s airways may be downloaded here.