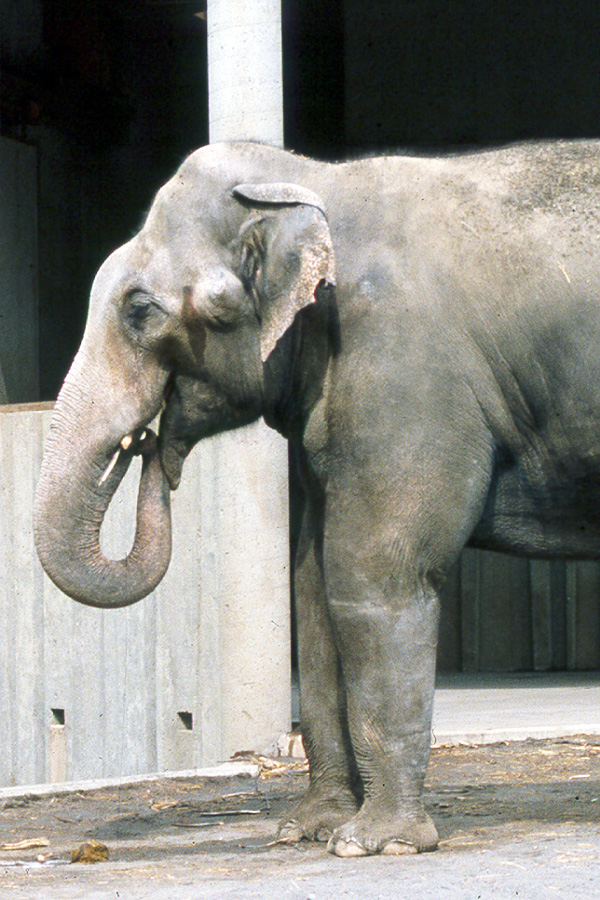 September 30, 2002 — In a study that may improve animal breeding and reveal more about how animals detect odors, Utah and Oregon scientists learned how proteins help a female sex attractant stimulate male elephants so they mate, and how one protein may end their arousal.

“For elephants, we have now discovered the pathway by which the sex attractant gets from the female’s urine to the male”s sensory organ, thereby arousing the male in a highly visible, dramatic fashion,” says Glenn D. Prestwich, senior author of the new study and professor and chair of medicinal chemistry at the University of Utah College of Pharmacy.

The researchers identified a protein – known as OBP or odorant binding protein – that they believe acts like a sponge to absorb the female pheromone or sex attractant after mating has occurred and the male no longer needs to be stimulated.

“Without this mechanism, the sexual arousal [of the male elephant] would persist long beyond what would be either comfortable or manageable,” Prestwich says.

The findings were published in the Oct. 1 issue of the journal Biochemistry.

Research on sexual communication among elephants not only sheds light on animal behavior, but also may prove useful for “facilitating mating in livestock, horses, dogs [and other animals] by using odors for the arousal of males at appropriate times in the female cycle,” Prestwich says.

The research contributes to “understanding the basic elements of odor perception in all animals, including humans,” he adds.

Rasmussen says that by studying elephants, researchers can better understand how mammals in general utilize sex-attractant pheromones that affect behavior.

“If we understand what compounds elephants smell, how they smell such chemical signals or pheromones, and how it influences their behaviors, we can manage elephants better in captivity and develop effective chemical repellents to be used in conjunction with trenches, electric fences and other physical barriers,” Rasmussen says.

She says chemical communication is significant among elephants. She also studies a male condition known as musth, in which a gland near the elephant’s eyes emits odors during their annual period of increased sexual activity and aggression.

Rasmussen says scientists study how elephants detect odors “for the same reason we want to understand why whales sing and what their songs mean. Some whales (killer whales) and elephants have matriarchal, multigenerational, stable societies in which ‘cultural’ information is passed from great-grandmothers to youngsters. Anthropologists and human behaviorists are interested in how whales and elephants manage their societies so effectively and smoothly.”

Rasmussen spent two decades tracking down the sex pheromone in female elephant urine. In a 1996 study, she identified it as a lipid named (Z)-7-dodecen-l-yl acetate, or Z7-12:Ac, which also is a component of sex pheromone in many moths. The pheromone is not a fat. It is an ester – a combination of alcohol and acid – a chemical category that includes the odor of cucumbers and most flowers.

To humans, it has only a faint sweet odor. “But it sure does something to elephants,” Prestwich says.

The male Asian elephant, Elephas maximus, first uses its trunk and regular sense of smell to sniff the urine of female elephants. The male then touches the urine-laden tip of his trunk to the roof of his mouth, transferring a bit of the urine to the vomeronasal organ (VNO), which is foot-long chemical-sensing organ that is distinct from the elephant’s regular sense of smell. If the female is in heat and her urine contains the sex attractant pheromone, the male gets a penile erection and attempts to mount the female.

Use of the VNO “almost always has to do with sexual arousal, whereas the normal sense of smell is for food finding, territorial marking and other social and environmental cues,” Prestwich says.

The researchers showed that the sex attractant pheromone attaches strongly to the odorant binding protein in elephant mucus. The protein also attaches weakly to other odors, which Prestwich compares with background smells. By absorbing other odors, the odorant binding protein lets more of the pheromone reach nerve cells in the VNO or vomeronasal organ, arousing the elephant, Prestwich says.

The odorant binding protein acts like a scavenger, so the researchers believe that, after mating, it “mops up” excess pheromone so the male elephant no longer is stimulated, he adds.

Prestwich says he believes a similar process occurs in pigs, deer, mice, rats, hamsters and other mammals that have this sense organ, the VNO. And while humans apparently lack a functioning VNO, “all olfaction occurs this way, in us and in moths: we receive and then remove the signals to be ready for a new stimulus,” he adds.

The study began after Prestwich identified proteins involved in the action of insect pheromones. He heard Rasmussen deliver a lecture about elephant pheromone and decided to look for proteins that help the pheromone do its job.

Rasmussen first demonstrated that a synthetic elephant sex pheromone was as good as real pheromone in arousing male elephants. Then, in Utah, Lazar synthesized chemically modified versions of the pheromone to determine the role of various proteins in helping the male detect the female sex attractant. Rasmussen placed synthetic pheromone in water or in puddles or urine from females that were not in heat, then watched how males responded.

Rasmussen collected urine and mucus for the study primarily from 14 elephants at Riddle’s Elephant and Wildlife Sanctuary in Greenbriar, Ark. Early in the study, a few samples also were collected from the famed male Packy and a female named Pet at the Washington Park Zoo (now the Oregon Zoo) in Portland, Ore.

“We did the lab work, Bets did the fun part,” Prestwich jokes.

The study is an outgrowth of research into insect attractants and hormones that Prestwich conducted before he joined the University of Utah in 1996. His research in Utah deals with developing biomaterials as new methods to administer medicines and for engineering body tissues. He also studies biochemical pathways important in how cells communicate with lipids and how mistakes in such communication cause cancer.