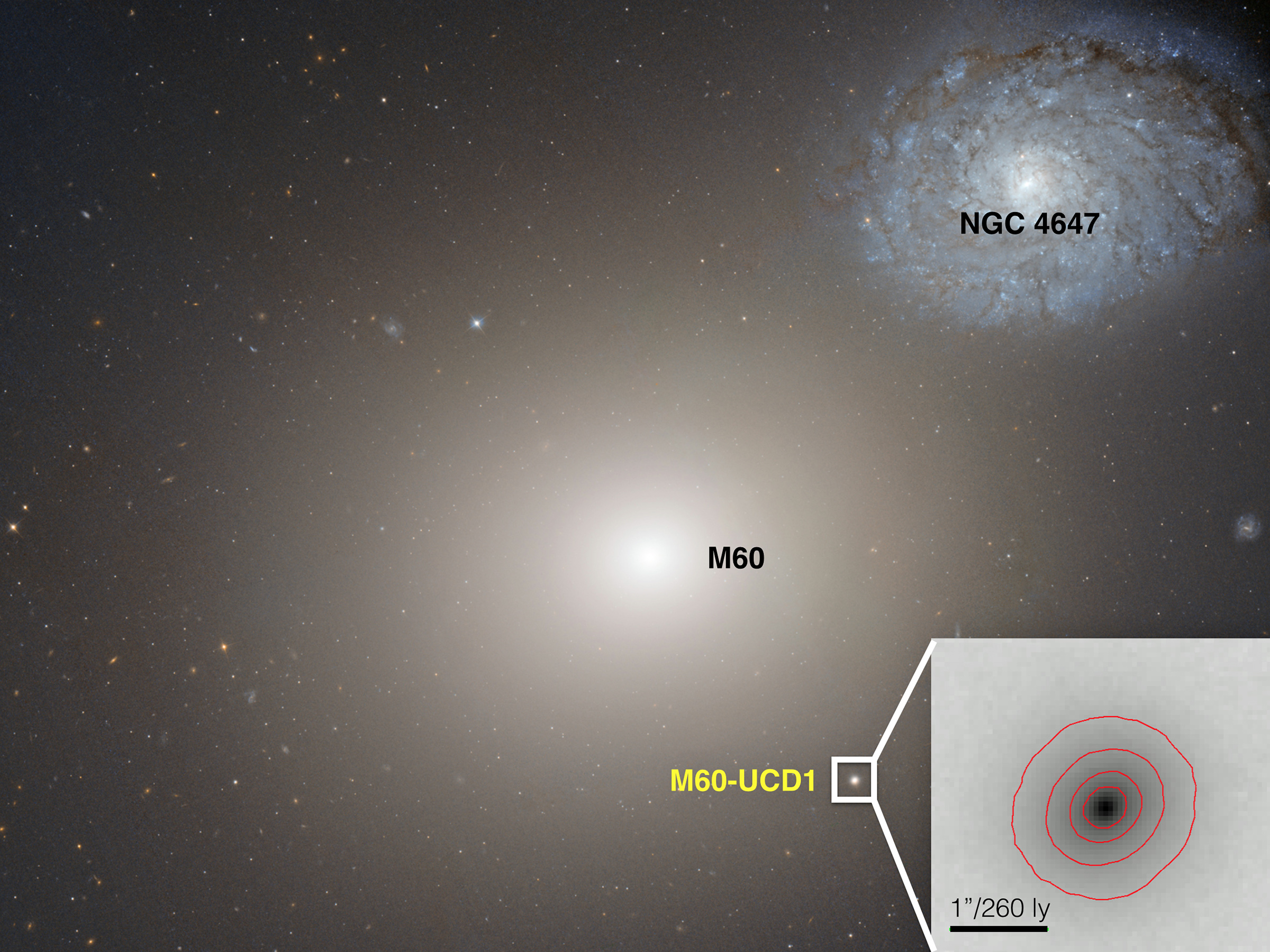 Sept. 17, 2014 – A University of Utah astronomer and his colleagues discovered that an ultracompact dwarf galaxy harbors a supermassive black hole – the smallest galaxy known to contain such a massive light-sucking object. The finding suggests huge black holes may be more common than previously believed.

“It is the smallest and lightest object that we know of that has a supermassive black hole,” says Anil Seth, lead author of an international study of the dwarf galaxy published in Thursday’s issue of the journal Nature. “It’s also one of the most black hole-dominated galaxies known.”

The astronomers used the Gemini North 8-meter optical-and-infrared telescope on Hawaii’s Mauna Kea and photos taken by the Hubble Space Telescope to discover that a small galaxy named M60-UCD1 has a black hole with a mass equal to 21 million suns.

Their finding suggests plenty of other ultracompact dwarf galaxies likely also contain supermassive black holes – and those dwarfs may be the stripped remnants of larger galaxies that were torn apart during collisions with yet other galaxies.

“We don’t know of any other way you could make a black hole so big in an object this small,” says Seth, an assistant professor of physics and astronomy at the University of Utah. “There are a lot of similar ultracompact dwarf galaxies, and together they may contain as many supermassive black holes as there are at the centers of normal galaxies.”

Black holes are collapsed stars and collections of stars with such strong gravity that even light is pulled into them, although material around them sometimes can spew jets of X-rays and other forms of radiation. Supermassive black holes – those with the mass of at least 1 million stars like our sun – are thought to be at the centers of many galaxies.

The central, supermassive black hole at the center of our Milky Way galaxy has the mass of 4 million suns, but as heavy as that is, it is less than 0.01 percent of the galaxy’s total mass, estimated at some 50 billion solar masses.

By comparison, the supermassive black hole at the center of ultracompact dwarf galaxy M60-UCD1 is five times larger than the Milky Way’s, with a mass of 21 million suns, and is a stunning 15 percent of the small galaxy’s total mass of 140 million suns.

“That is pretty amazing, given that the Milky Way is 500 times larger and more than 1,000 times heavier than the dwarf galaxy M60-UCD1,” Seth says.

“We believe this once was a very big galaxy with maybe 10 billion stars in it, but then it passed very close to the center of an even larger galaxy, M60, and in that process all the stars and dark matter in the outer part of the galaxy got torn away and became part of M60,” he says. “That was maybe as much as 10 billion years ago. We don’t know.”

Seth says ultracompact dwarf galaxy M60-UCD1 may be doomed, although he cannot say when because the dwarf galaxy’s orbit around M60 isn’t known. M60 is among the largest galaxies in what astronomers refer to as “the local universe.”

The study – conducted by Seth and 13 other astronomers – was funded by the National Science Foundation in the U.S., the German Research Foundation and the Gemini Observatory partnership, which includes the NSF and scientific agencies in Canada, Chile, Australia, Brazil and Argentina.

Ultracompact dwarf galaxies are among the densest star systems in the universe. M60-UCD1 is the most massive of these systems now known, with a total of 140 million solar masses.

These dwarf galaxies range are less than a few hundred light years across (about 1,700 trillion miles wide), compared with our Milky Way’s 100,000-light-year diameter.

Astronomers have debated whether these dwarf galaxies are the stripped centers or nuclei of larger galaxies that were ripped away during collisions with other galaxies, or whether they formed like globular clusters – groups of perhaps 100,000 stars, all born together. There are about 200 globular clusters in our Milky Way, and some galaxies have thousands, Seth says.

The astronomers estimated the mass of the dwarf galaxy’s supermassive black hole by using the Gemini North telescope to measure the speed and motion of stars in orbit around it, and they showed the galaxy contains more mass than would be expected by the amount of starlight it emits. The stars at the center of M60-UCD1 move at about 230,000 mph – faster than stars would be expected to move without the black hole.

An alternate theory is that M60-UCD1 doesn’t have a supermassive black hole, but instead is populated by a lot of massive, dim stars.

But Seth says the research team’s observations with the Gemini North telescope and analysis of archival photos by the Hubble Space Telescope revealed that mass was concentrated in the galaxy’s center, indicating the presence of a supermassive black hole. That suggests that M60-UCD1 is the stripped nucleus of what once was a much larger galaxy, and that other ultracompact dwarf galaxies also may harbor huge black holes, Seth says.

The galaxy that was stripped and left M60-UCD1 as a remnant was about 10 billion solar masses, or about one-fifth the mass of the Milky Way, Seth says.

The astronomers studied M60-UCD1 because they had published a paper last year showing the galaxy was an X-ray source and was extremely dense. The X-ray emissions suggest gas is being sucked into the black hole at a rate typical of supermassive black holes in much larger galaxies.

The Research Facilities and Team

The Gemini Observatory is an international collaboration with two identical 8-meter telescopes: Gemini North on the island of Hawaii and Gemini South on Cerro Pachón in central Chile. Together, the telescopes cover both hemispheres of the sky. The telescopes incorporate technologies that allow large, relatively thin and actively controlled mirrors to collect and focus infrared light from space, eliminating the blurring effects of the atmosphere and enabling the observations for the new study. The observatory is managed by the Association of Universities for Research in Astronomy under a cooperative agreement with the National Science Foundation.

A video simulation of galaxy M60’s gravity stripping M60-UCD1’s outer parts is here: http://vimeo.com/105370891
Until the embargo expires, media may use the case-sensitive password: Baumgardt

Caption and credit for video:

Formation of Dwarf Galaxy M60-UCD1: University of Utah astronomer Anil Seth led an international research team that discovered the smallest galaxy known to harbor a supermassive black hole. The video simulation shows how this small galaxy, named M60-UCD1, was formed from a larger, normal galaxy. The video begins with a background image made by the Hubble Space Telescope, with the huge elliptical galaxy M60 in the center, galaxy NGC4647 in the upper right and MC60-UCD as a small whitish spot lower right. As the video begins, a normal galaxy (yellow and red) orbits M60. During an estimated 500 million years, M60’s gravity strips stars (red material) from the orbiting galaxy, leaving as a remnant the ultracompact dwarf galaxy now known as M60-UCD1. The end of the video zooms in on the Hubble Space Telescope close-up image of M60-UCD1, which today continues to orbit M60. Seth says that while this process took about 500 million years, astronomers don’t know when it happened, and that it could have been billions of years ago. This video was made by University of Queensland astronomer Holger Baumgardt, one of Seth’s co-authors on the new study published by Nature.