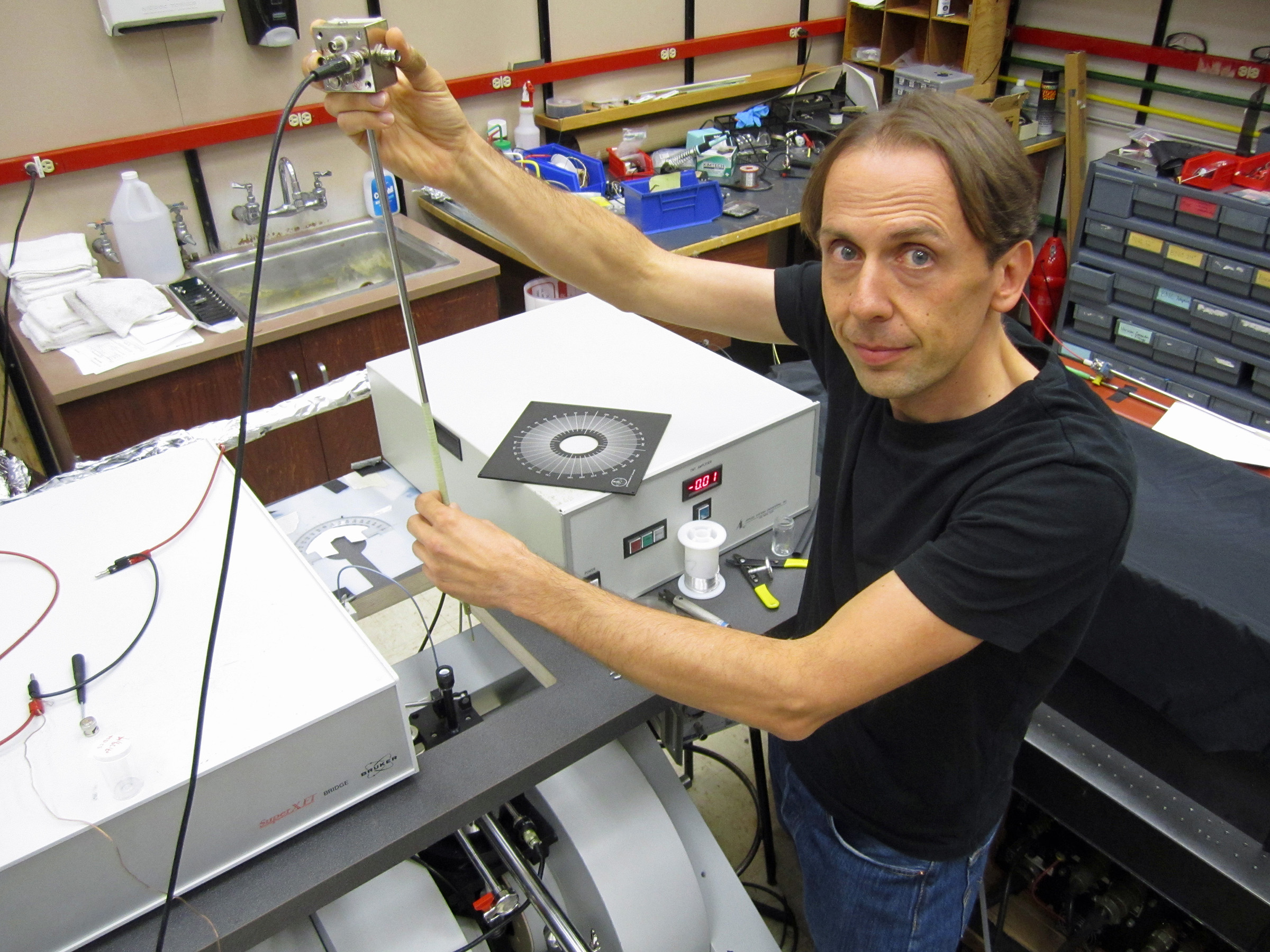 Sept. 18, 2014 – University of Utah physicists read the subatomic “spins” in the centers or nuclei of hydrogen isotopes, and used the data to control current that powered light in a cheap, plastic LED – at room temperature and without strong magnetic fields.

The study – published in Friday’s issue of the journal Science – brings physics a step closer to practical machines that work “spintronically” as well as electronically: superfast quantum computers, more compact data storage devices and plastic or organic light-emitting diodes, or OLEDs, more efficient than those used today in display screens for cell phones, computers and televisions.

“We have shown we can use room-temperature, plastic electronic devices that allow us to see the orientation of the tiniest magnets in nature – the spins in the smallest atomic nuclei,” says physics professor Christoph Boehme, one of the study’s principal authors. “This is a step that may lead to new ways to store information, produce better displays and make faster computers.”

The experiment is a much more practical version of a study Boehme and colleagues published in Science in 2010, when they were able to read nuclear spins from phosphorus atoms in a conventional silicon semiconductor. But they could only do so when the apparatus was chilled to minus 453.9 degrees Fahrenheit (nearly absolute zero), was bombarded with intense microwaves and exposed to superstrong magnetic fields.

In the new experiments, the physicists were able to read the nuclear spins of two isotopes of hydrogen: a single proton and deuterium, which is a proton, neutron and electron. The isotopes were embedded in an inexpensive plastic polymer or organic semiconductor named MEH-PPV, an OLED that glows orange when current flows.

The researchers flipped the spins of the hydrogen nuclei to control electrical current flowing though the OLED, making the current stronger or weaker. They did it at room temperature and without powerful light bombardment or magnetic fields – in other words, at normal operating conditions for most electronic devices, Boehme says.

“This experiment is remarkable because the magnetic forces created by the nuclei are millions of times smaller than the electrostatic forces that usually drive currents,” yet they were able to control currents, he says.

Harnessing nuclear spins can increase the efficiency “of electronic materials out of which so much technology is made,” Boehme adds. “It also raises the question whether this effect can be used for technological applications such as computer chips that use nuclear spins as memory and our method as a way to read the spins.”

The U.S. Department of Energy funded the new study, and the physicists used facilities of the University of Utah’s Materials Research Science and Engineering Center, funded by the National Science Foundation.

In spintronics, data are stored by the spins of either electrons or, preferably, atomic nuclei. Spin often is compared with a tiny bar magnet like a compass needle, either pointing up or down – representing one or zero – in an electron or an atom’s nucleus. Nuclear spin orientations live longer, so are better for storing data.

Boehme says scientists previously have claimed that current in plastic semiconductors – known formally as pi-conjugated polymers – can be controlled by the nuclear spins in hydrogen. Until the new study, “nobody has ever shown it directly” at room temperature by turning nuclear spins to change an electrical current, he adds.

In the new experiments, the physicists used magnetic resonance to reverse the nuclear spins in hydrogen isotopes embedded in the OLED, and then were able to detect how the reversed spins caused a change in the electrical current through the OLED.

In the first two experiments, Boehme says, the physicists made nuclear spins in a proton and deuterium wiggle in characteristic ways, and were able to read corresponding wiggles in the resulting electrical current. In a third experiment, they flipped the spins back and forth at a rate they wanted instead of at the characteristic frequencies.

“It worked,” Boehme says. “This shows you can turn a nuclear spin when you want, and only then the current turns around. We can control a current by controlling nuclear spins.”

The researchers measured the current change directly, but not resulting changes in the OLED’s light output – changes so small they aren’t detectable with the naked eye.

By storing information using both spins and electrical charge, spintronic devices should have greater storage capacity and process data more quickly – although researchers still have years to go to figure out how to connect and process spintronically stored information in futuristic computers, conventional and quantum.

Yet he says spintronics already resulted in today’s terabyte-sized computer hard drives, which use spintronic “read heads” so small that data can be stored more densely.

In 2012, Boehme and colleagues showed the same spintronic OLED in the new study works as a “dirt cheap” magnetic field sensor at room temperature without being compromised by degradation. Such sensors may enable more accurate spacecraft navigation systems, he says.

Because nuclear spin-controlled electrical current regulates output of light by the OLED, it provides a way to study how to make OLEDs more efficient. OLEDs convert far more electricity into light than incandescent light bulbs, which turn most incoming electricity into heat. But there is much more room for improved efficiency.

“Hopefully, OLEDs will become better – use less electricity and produce more light – because we learned here how nuclear spins’ orientation influences how well the OLED works,” Boehme says. “Any sort of efficiency limitation can only be overcome if the mechanism that imposes this limitation is understood.”