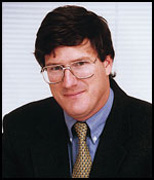 November 25, 2002 — The Salt Lake City Film Center and the College of Humanities at the University of Utah will bring Scott Ritter to Salt Lake City on Friday, December 6.

Scott Ritter, career U.S. Marine officer and former United Nations chief weapons inspector to Iraq, will give a free public lecture and present his documentary, “In Shifting Sands: The Truth about UNSCOM and the Disarming of Iraq,” from 2:30-4:30 p.m. at the University of Utah Museum of Fine Arts (410 S. Central Campus Drive). A question-and-answer session will follow. Ritter will be available for media interviews following the program, from 5-6 p.m. at the Utah Museum of Fine Arts.

In the film, Ritter explores the complex issues involved in the interplay of forces between the United States, the United Nations and Iraq in regard to Iraq’s obligation to disarm its weapons of mass destruction. He examines the economic embargo and where the responsibility for our current situation lies. Through interviews with Rolf Ekeus, the first chief of the U.N. weapons inspectors, Tariq Aziz, Deputy Prime Minister of Iraq, as well as with numerous other former U.N. and Iraqi officials, Ritter’s film opens new windows of understanding and provides a balanced account of the work of the United Nations inspections.

Ritter has become increasingly controversial in recent months for his opposition to U.S. military operations in Iraq and has been labeled a traitor by some in the media and in the Bush administration. Ritter counters that he is a patriotic American who believes the best way to ensure peace and stability in the Gulf region and to safeguard U.S. interests is through the application of consistent multilateral policies.

Robert Newman, dean of the College of Humanities, says, “The viewpoint of the humanities is one that accepts the world as complex, and this certainly applies to the situation in Iraq. To have integrity as citizens, it is important for us to reflect upon diverse perspectives on the critical issues of our time. The college’s philosophers, historians, communicators, and students look forward to a dialogue with Ritter and the public.”

“Not withstanding what you feel about the prospect of war with Iraq, Scott Ritter will undoubtedly expand your current knowledge of the Iraqi problem and give you more to think about,” said Geralyn Dreyfous, co-founder of The Salt Lake City Film Center. “Iraq is perhaps the most crucial issue that we are dealing with today as a nation and we are very lucky to have a central figure in this debate speak to us.”

The College of Humanities confers about 20 percent of the University of Utah’s undergraduate diplomas and is the foundational core of higher education, teaching students to interpret, humanize, and broadly communicate ideas and discoveries. Its interdisciplinary emphases include applied ethics and international studies.

The Salt Lake City Film Center and Artists’ Collaborative is dedicated to strengthening the community’s film culture by bringing the best and most innovative films and filmmakers to the widest possible local audience to help Salt Lake City become a destination for filmmakers, film lovers and the next generation of storytellers.

Note to Media: Scott Ritter will be available for media interviews from 5-6 p.m. on December 6 at the Utah Museum of Fine Arts