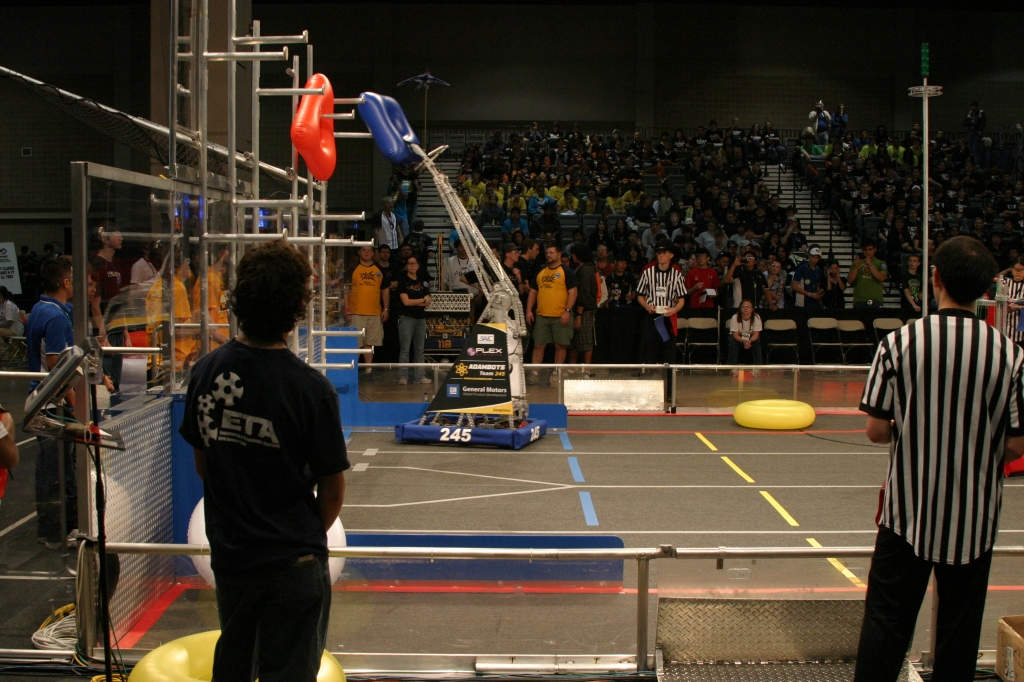 The public and news media are invited to the event, which runs from 9 a.m. to 5 p.m. MDT each day in the Huntsman Center, 1825 South Campus Drive, Salt Lake City.

The University of Utah’s College of Engineering and Utah Governor’s Office for Economic Development will host the event, which is a regional FIRST (For Inspiration and Recognition of Science and Technology) robotics competition.

The students’ robots will play a game called “LogoMotion,” where robots score points on a 27-by-54-foot playing field by hanging as many triangle, circle and square FIRST logo pieces on a peg board in the end zone. Some teams also built optional “minibots,” which will climb vertical poles for the chance to earn additional points.

In January, 30 teams comprised of about 25 students each received a robot kit of parts made up of motors, batteries, a control system, a PC and a mix of automation components. Working with mentors, students were given six weeks to design, build, program and test their robots for the April competition.

Teams will vie for honors and recognition from FIRST in design excellence, competitive play, sportsmanship and partnership-building. Six winning teams from the regional competition will go on to compete at the international FIRST robotics championship in St. Louis, Mo., April 29-30, 2011.

Here are some highlights of the event:

FIRST is a national organization that encourages young students to pursue careers in engineering and technology. The competition is being organized as part of a National Science Foundation Integrated Graduate Education and Research Traineeship (IGERT) grant awarded to the University of Utah’s school of computing and department of mechanical engineering. The goal of the grant is to train promising young scientists in robotics through early exposure to research, careful mentoring and support. The competition is also sponsored by NASA, Platt Electric, Micron Foundation, ITT Technical Institute, Rocky Mountain Power, Utah Governor’s Office for Economic Development and the University of Utah.

For more information about the FIRST competition, please visit: http://www.utfrc.utah.edu.