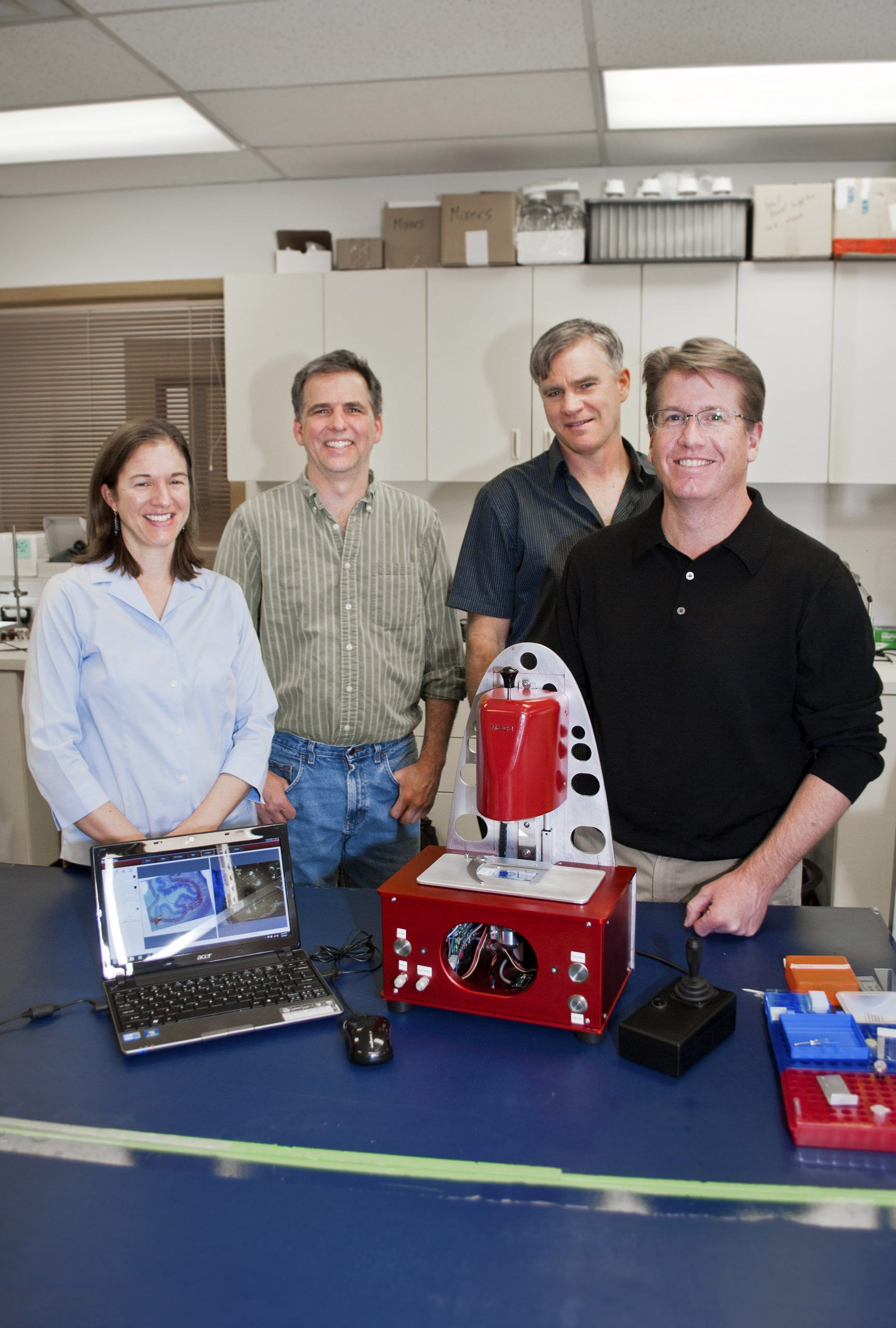 March 28, 2012 — A new device designed to more effectively produce DNA samples for genetic testing from slide-mounted tissue samples is better equipped than most models on the market to help in the diagnosis and treatment of cancer. Its University of Utah inventors say the microdissection device is an effective and reasonably priced method for removing tissue samples from microscope slides. The samples are used for genetic testing, so precision is essential. The impact could be substantial because genetic testing is becoming more popular in the fight against cancer, and so the demand for efficient dissection tools is growing.

The related Salt Lake City startup company, AvanSci Bio, is just now selling the new device, called the MESO-1. The company was formed in 2011 and has attracted significant funding – including a $50,000 grant from the U, more than $500,000 from private investors, and most recently, a $213,000 grant from the federal Small Business Innovation Research (SBIR) program.  Additional funding is on the horizon.

“Their device addresses a need in clinical laboratories for a slide microdissection system that is semi-automated, precise and convenient to use for the pathologist,” said Beth Drees, a manager at the U’s Technology Commercialization Office (TCO), which administers the U’s intellectual property and assisted AvanSci Bio in many ways. “A growing number of molecular tests require that specific cells of interest, such as tumor cells, be dissected out from slide-mounted tissue samples.”

The MESO-1 consists of three basic parts: an instrument that resembles a small milling machine equipped with a joy stick and digital microscope for controlling the milling process; a specialized consumable mill bit called the xScisor; and computer software for annotating images and pinpointing a tissue section to be collected. The xScisor is one of the most unique components of the device and mills the tissue from the slide surface while simultaneously dispensing and aspirating fluid to recover the displaced tissue fragments. The tissue fragments are then recovered for further testing.

One major user group targeted is laboratories performing genetic testing to detect mutations in cancer. The industry standard is to use a scalpel to scrape part of a tumor off a slide. This method is inexpensive and works for many samples, but it falls short when precision is required. A laser method also exists to collect precise samples, but those instruments can cost up to $500,000.

MESO-1 falls in between these two competing methods by providing a more accurate sample than scraping slides by hand, while being much less expensive than laser methods. AvanSci Bio expects to sell its device for a base price of $20,000. The name for MESO-1 suggests the middle ground it fills in the marketplace – “meso” means middle.

Co-inventor Katherine Geiersbach, M.D., assistant professor in the U’s Department of Pathology, first identified the need for the device while working in molecular oncology at Associated Regional and University Pathologists (ARUP), the U’s national reference laboratory that performs laboratory testing for University Health care and for other hospital systems across the country. She was frustrated by the lack of a method that was more precise than hand-scraping while more convenient than the laser method.

“In the clinical testing arena, we frequently need greater accuracy than we can achieve with a scalpel, but LCM (laser capture microdissection) is not a practical solution for most labs,” says Geiersbach. “In addition to greater accuracy, our device fills the need for maintaining digital records of the dissection process. It captures pre- and post-dissection images and creates an electronic report for each sample.”

AvanSci Bio believes their device will be helpful to as many as 500 clinical labs, including ARUP, and 2,500 research labs. The company projects a 20 percent annual market-growth rate leading to substantial demand for its device due to its unique capabilities and the rising popularity of genetic testing. In addition, it anticipates developing more versions of the device for different levels of accuracy and higher volumes of testing.

While Geiersbach identified the need for the device, provided pathology and biochemical materials and oversight, and was closely involved with the development process, other members of AvanSci Bio and ARUP executed a diverse array of tasks.

Getting the microdissection device ready for market was a collaborative effort. ARUP’s Mark Herrmann played an integral role in its development by providing the mechanical engineering expertise to design and build the MESO-1 instrument and the xScisor consumable.  AvanSci Bio CSO, Nils Adey, Ph.D., conceived and developed early prototypes of the xScisor and led the biochemical testing and validation efforts. Rob Parry, an engineer, entrepreneur and AvanSci Bio CEO, oversaw the development process and daily operations of AvanSci Bio, and was intimately involved with all elements of the instrument and software design that make up the MESO-1 system.

“AvanSci Bio’s strategy right from the start was to utilize the available services of the TCO along with our relationship with ARUP to our maximum benefit,” says Parry.

TCO and its parent U department, Technology Venture Development, offer similar programs and services to all university faculty. Their central mission is to commercialize faculty inventions, while also engaging students and the broader community, for the benefit of the state and nation.

“AvanSci Bio is a great example of Utah-based ingenuity and the U’s continued dedication to innovation and excellence,” Drees said. “Their success is a great example for other Utah startups, and helps further build the medical and biotechnology industry in Utah.”