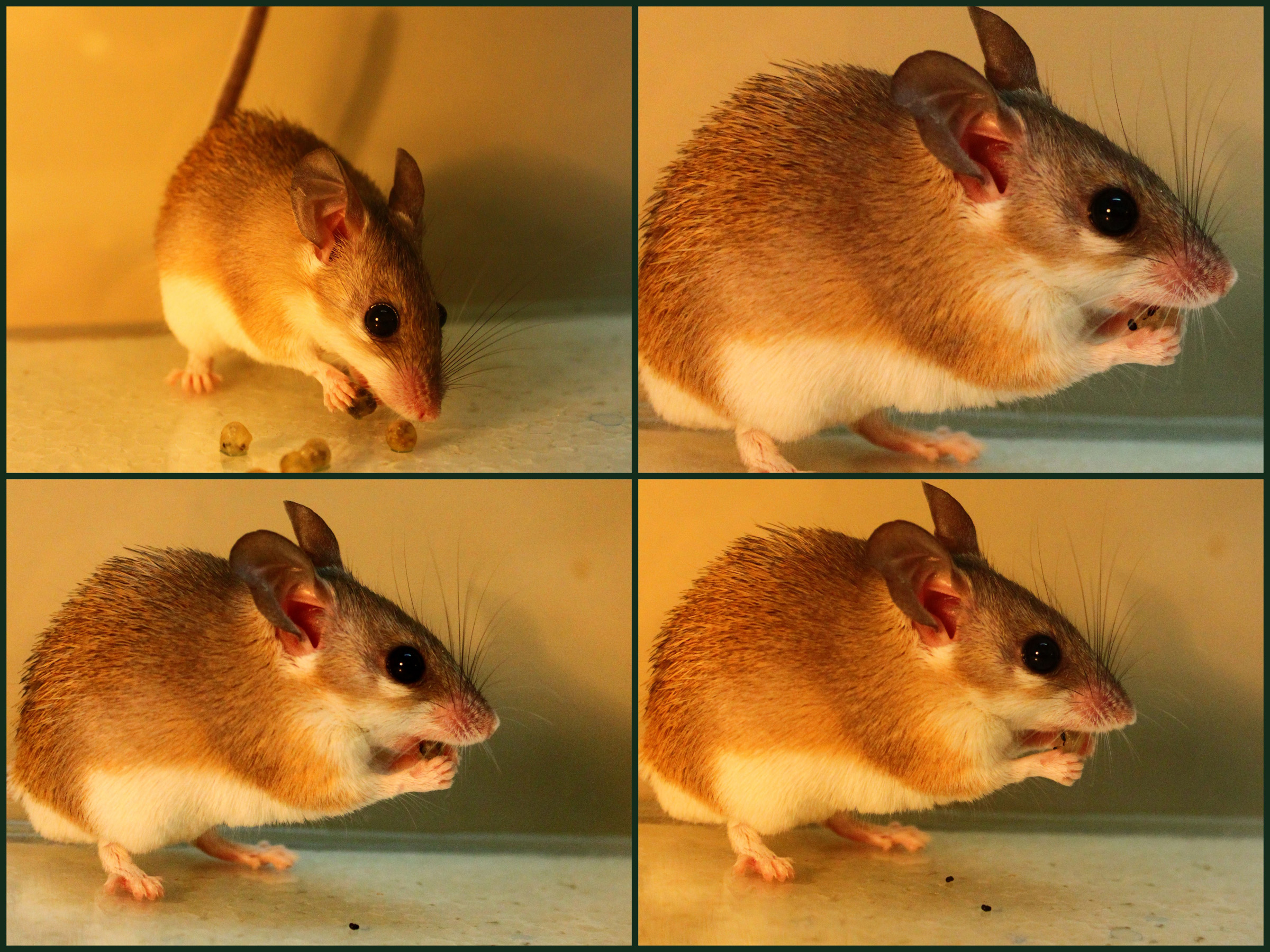 June 14, 2012 – In Israel’s Negev Desert, a plant called sweet mignonette or taily weed uses a toxic “mustard oil bomb” to make the spiny mouse spit out the plant’s seeds when eating the fruit. Thus, the plant has turned a seed-eating rodent into a seed spreader that helps the plant reproduce, says a new study by Utah and Israeli scientists.

“It’s fascinating that these little mice are doing analytical chemistry, assaying the fruit for toxic compounds” and learning not to bite into the seed, says Denise Dearing, a coauthor of the study and professor of biology at the University of Utah.

“It adds a new dimension to our understanding of the ongoing battle between plants and animals,” she adds. “In this case, the plants have twisted the animals to do their bidding, to spread their progeny.”

The study was set for online publication June 14 in the journal Current Biology.

The study illustrates the first known case within a single species of what is known as the “directed deterrence” hypothesis, namely, “the fruit is trying have itself eaten by the right consumer – one that will spread its seeds,” Dearing says. “The plant produces a fruit to deter a class of consumers that would destroy its seeds.”

The best known example before the new study involved chili peppers and two different classes of animals. Chili peppers deter mammals from eating their seeds because mammals can register pain from the ingredient capsaicin. Birds “don’t feel the heat at all,” says Dearing. “They tend not to crush the seeds while they are feeding, so they are good dispersers of chili pepper seeds.”

The researchers observed two other species – another spiny mouse species and a rodent named the bushy tailed jird – also spitting out sweet mignonette seeds while eating the fruit. They say the new study is the first to find seed-spitting in rodents, although it has been documented previously in primates named long-tailed macaques.

The study involved a fleshy-fruited shrub Ochradenus baccatus, known in Israel as sweet mignonette but also commonly known as taily weed. (Sweet mignonette is the name also used for Reseda odorata, another member of the same family.)

The plant has radiating, narrow, spiny leaves, and a central stalk containing yellow-green flowers and, ultimately, immature white berries and mature black berries less than a quarter-inch diameter. It fruits year-round, producing thousands of berries. Each berry holds five to nine seeds. The plant or its fruits are eaten by camels, ibex, rodents and many birds.

The researchers say the plant is a key species that plays a critical role in extreme deserts because it often is a focus for animal activity – providing food, water, shade and nesting sites – and sometimes serves as a “nurse plant” to help other plant species become established.

The mustard oil bomb produced by Ochradenus baccatus is activated when an animal eating the plant’s small berries chews the seed as well as the fruity pulp. Enzymes (myrosinases) in the seed activate toxic substances (glucosinolates, or GLSs) in the pulp, which otherwise would be harmless.

The reaction produces chemicals named thiocyanate, isothiocyanates and nitriles. Isothiocyanates are responsible for the characteristic hot flavor of mustard. This mustard bomb first was discovered in mustard plants, and it already was known to deter insects from eating leaves of certain plants.

The chemical reaction in Ochradenus baccatus “has more of a punch than Grey Poupon,” Dearing says. “It must taste very strong.”

A Mouse that Eats the Fruit but Spits the Seeds

Strong enough so the memory of it makes the common or Cairo spiny mouse – Acomys cahirinus – spit out most of the seeds while chewing the pulp. The new study documented that in photographs and video. The study also found the nocturnal mice will revert to eating the seeds if the mustard bomb is deactivated.

So the mustard bomb is “encouraging seed dispersal via seed spitting by rodents,” the researchers wrote.

“It’s not that these mice have poor table manners,” Dearing says. “They deliberately wiggle the seed out of the pulp of the fruit like a person does when eating watermelon. This removal of the seed keeps the toxins in the pulp from being activated.”

She calls it “an elegant example of the interesting adaptations and counter-adaptations in the arms-race between plants and animals. On the surface, it seems that the mouse has the upper hand by circumventing the plant’s defense, yet it’s the plant that benefits by having the mouse distribute its seeds.”

“This spiny mouse is a member of a family of rodents that are typically thought to be seed predators,” and, indeed, the researchers were surprised to find it didn’t eat the seeds at the same time they ate the fruit, Dearing says.

“They will eat the seeds of this fruit several hours later after the pulp has been digested,” she adds. “When we do experiments in cages, they will spit out the seeds and leave them alone for several hours and them come back and ingest all the seeds.”

She is not sure they do so in nature because after eating fruit and spitting out seeds, “they move on and are unlikely to return to the same spot.”

“Thus, when faced with a ‘disarmed’ mustard oil bomb, Acomys behaved as a seed predator,” the researchers wrote.

In another part of the study, the researchers left sweet mignonette berries in lab petri dishes in both rocky crevices and under the sweet mignonette shrubs, videotaped the mice eating them, and then counted more seeds were left intact in the crevices than under the parent plants.

“The mice are actually dispersing the seeds to a suitable habitat for germination,” says Dearing. “Under the parent plant is a bad spot. A rocky crevice would be a cool, suitable location because it’s not in direct sunlight.”

The researchers collected seeds spit out by mice in the field and tried germinating them in the lab, which all the seeds from mature berries did successfully. They also found that seeds spit out by the mice germinated at twice the rate of seeds left inside intact fruit.