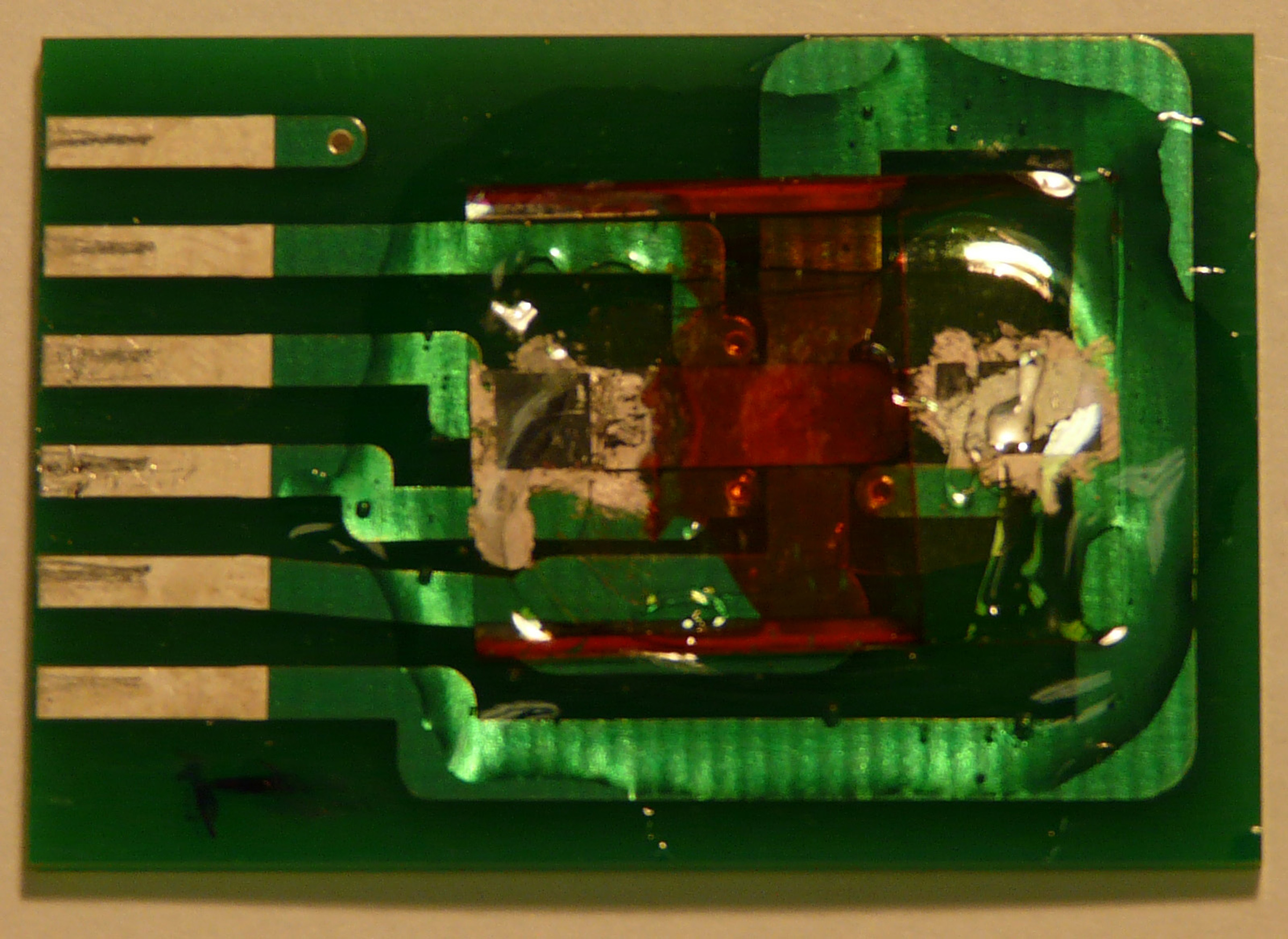 The new kind of magnetic-resonance magnetometer also resists heat and degradation, works at  room temperature and never needs to be calibrated, physicists Christoph Boehme, Will Baker and colleagues report online in the Tuesday, June 12 edition of the journal Nature Communications.

The magnetic-sensing thin film is an organic semiconductor polymer named MEH-PPV. Boehme says it really is nothing more than an orange-colored “electrically conducting, magnetic field-sensing plastic paint that is dirt cheap. We measure magnetic fields highly accurately with a drop of plastic paint, which costs just as little as drop of regular paint.”

The orange spot is only about 5-by-5 millimeters (about one-fifth inch on a side), and the part that actually detects magnetic fields is only 1-by-1 millimeters. This organic semiconductor paint is deposited on a thin glass substrate which then is mounted onto a circuit board with that measures about 20-by-30 millimeters (about 0.8 by 1.2 inches).

The new magnetic field sensor is the first major result to come out of the new Materials Research Science and Engineering Center launched by the University of Utah last September: a six-year, $21.5 million program funded by the National Science Foundation, the Utah Science Technology and Research initiative and the university.

University of Utah physics professor Brian Saam, one of the center’s principal investigators, says the new magnetometer “is viewed widely as having exceptional impact in a host of real-world science and technology applications.”

Boehme is considering forming a spinoff company to commercialize the sensors, on which a patent is pending. In the study, the researchers note that “measuring absolute magnetic fields is crucial for many scientific and technological applications.”

As for potential uses in consumer products, Boehme says it’s difficult to predict what will happen, but notes that existing, more expensive magnetic-field sensors “are in many, many devices that we use in daily life: phones, hard drives, navigation devices, door openers, consumer electronics of many kinds. However, Joe Public usually is not aware when he uses those sensors.”

“There are sensors out there already, but they’re just not nearly as good – stable and accurate – and are much more expensive to make,” Saam says.

Boehme believes the devices could be on the market in three years or less – if they can be combined with other new technology to make them faster. Speed is their one drawback, taking up to a few seconds to read a magnetic field.

The study was funded by the U.S. Department of Energy, National Science Foundation, David and Lucile Packard Foundation and Australian Research Council.

Sensor Based on Organic Spintronics

The sensors are based on a field of science named spintronics, in which data is stored both electronically in the electrical charges of electrons or atomic nuclei and in what is known as the “spin” of those subatomic particles.

Described simply, spin makes a particle behave like a tiny bar magnet that is pointed up or down within an electron or a nucleus. Down can represent 0 and up and represent 1, similar to how in electronics no charge represents 0 and a charge represents 1. Spintronics allows more information – spin and charge – to be used than electronics, which just uses charge.

The new magnetic field sensor paint contains negatively charged electrons and positively charged “holes” that align their spins parallel or not parallel in the absence or presence of a magnetic field – but only if radio waves of a certain frequency also are applied to the semiconductor paint.

So an electrical current is applied to the new device. Electrical contacts in the device act as tiny broadcast antennas to bombard the plastic paint with radio waves, which the researchers gradually change in frequency. If a magnetic field is present, the spins in the polymer paint will flip when the frequency of the radio waves matches the magnetic field. The change of spin in the paint is converted to an electrical current the researchers then read to determine magnetic field strength.

Because the paint is an organic polymer, the sensor is known as an organic spintronics device.

Device Works Even if ‘Old and Crusty’

Boehme’s new sensor is known as an organic magnetic resonance magnetometer or OMRM. Its one disadvantage is it is slow, taking up to a few seconds to detect a magnetic field. Boehme hopes to combine his technology with similar developing magnetometer technology known as an organic magnetoresistant sensor, or OMAR, which is more than 100 times faster but requires calibration, isn’t very accurate, detects only weak to moderate magnetic fields and is vulnerable to temperature fluctuations and material degradation.

The new device “can literally get old and crusty, and as long as it can carry a detectable current, the magnetic field can be measured accurately,” Boehme says.

Boehme says new experiments will determine how much smaller the 1-square-millimeter sensing area can be made and still have it accurately detect magnetic fields. He is aiming for 1 million times smaller: “It’s a matter of microfabrication.”