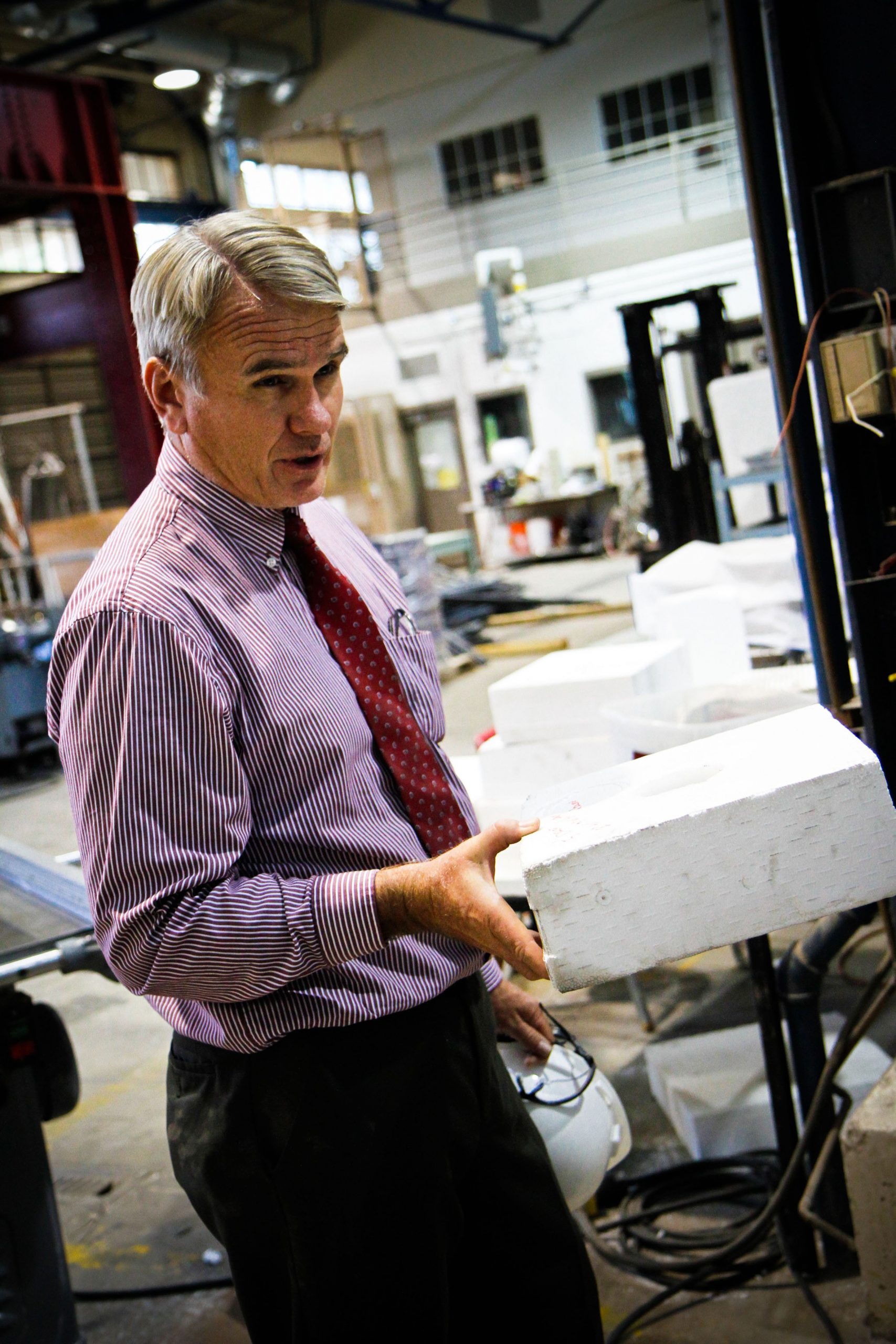 Oct. 2, 2012 –Lightweight and stiff as a board, a plastic foam material is being used to protect Utah’s natural gas pipelines from rupturing during earthquakes.

“If an earthquake occurs, high-pressure gas lines are one of the most important items to protect,” says Steven Bartlett, associate professor of civil engineering at the University of Utah. “If they rupture and ignite, you essentially have a large blowtorch, which is catastrophic.”

“This low-impact technology has an advantage in urban environments, particularly if you need to realign already buried structures such as gas lines or utilities without affecting adjacent buildings or other facilities,” says Bartlett.

Geofoam has been used for decades in Europe, North America and Asia to lighten loads under roads and reduce settlement. One-hundredth the weight of soil with similar strength, geofoam blocks reduce construction time and don’t erode or deteriorate.

Bartlett previously researched the design and use of geofoam as a lightweight road embankment in the Interstate-15 reconstruction project through the Salt Lake Valley a decade ago, and more recently in the TRAX light rail line that opened last year to serve West Valley City, Utah. Geofoam currently is being used in the TRAX extension to the airport.

“Most pipelines are designed to withstand some ground shaking, but not several feet of sudden fault offset that may occur in a major earthquake,” says Bartlett. “When a fault breaks, it occurs in milliseconds. It is an extreme event. The problem Questar faced was, how could a buried pipeline survive that offset?”

Geologists expect that when a major earthquake strikes the Wasatch fault zone in the Salt Lake Valley, a fault rupture likely will make the valley drop down relative to the mountains. As the valley drops down, a buried pipeline would start to lift up. However, most buried pipelines lie under six to eight feet of compacted soil. This weight becomes too much for a pipe to bear, causing it to rupture, Bartlett says.

Numerical simulations of earthquake fault ruptures performed by Bartlett and his students show a geofoam-protected pipeline on the valley side of the Salt Lake City segment of the Wasatch fault could withstand up to four times more vertical force than traditional soil cover.

Based on Bartlett’s experience with geofoam, Questar asked him to develop a strategy for protecting buried pipelines crossing earthquake faults in urban areas, such as 3300 South, an arterial street in the Salt Lake Valley.

“In this situation, we had to put the pipeline right down the center of the roadway. When we looked at what other countries did, they built a trapezoidal geometry above the pipe—basically just a wedge,” says Bartlett.

Such a wedge would require many blocks of foam and would disrupt a large section of road, Bartlett says. “This would be a major problem in an urban area, as you might have to tear up 20 feet of lateral roadway. Try to do that for 3300 South – you’d have to shut the whole road down.”

Rather than gut a major thoroughfare, Bartlett proposed a “slot trench” design in which a block of geofoam is placed in a narrow trench between a pipeline and the pavement above. In this design, if the pipeline begins to lift up, it will displace the geofoam block and compress it. Although geofoam is solid, it contains tiny air pockets that can compress without sacrificing the material’s overall integrity. As the geofoam is compressed further, it will slide upward along the trench sidewalls and could eventually damage the pavement above. However, says Bartlett, the pipeline will remain intact and essentially undamaged.

Since the 3300 South project, Questar has been installing geofoam to protect other natural gas pipelines in the valley.

In addition, Bartlett and colleagues at the University of Memphis and University of Illinois at Urbana-Champaign are investigating geofoam to help new buildings withstand earthquakes. When a building shakes during an earthquake, says Bartlett, soil adjacent to the building puts additional pressures on its walls as it tries to move back and forth.

By placing a geofoam buffer between a building’s walls and neighboring soil, it can sway without experiencing additional pressures. The geofoam, which deforms in a controlled manner when placed against a structure, can reduce earthquake pressures by 30 to 50 percent, according to Bartlett’s calculations. This also reduces the amount of steel and reinforcing concrete needed to protect the building from earthquake damage.

“When there are sensitive utilities involved, seismic stresses or time is a factor, this technology wins hands down,” says Bartlett.