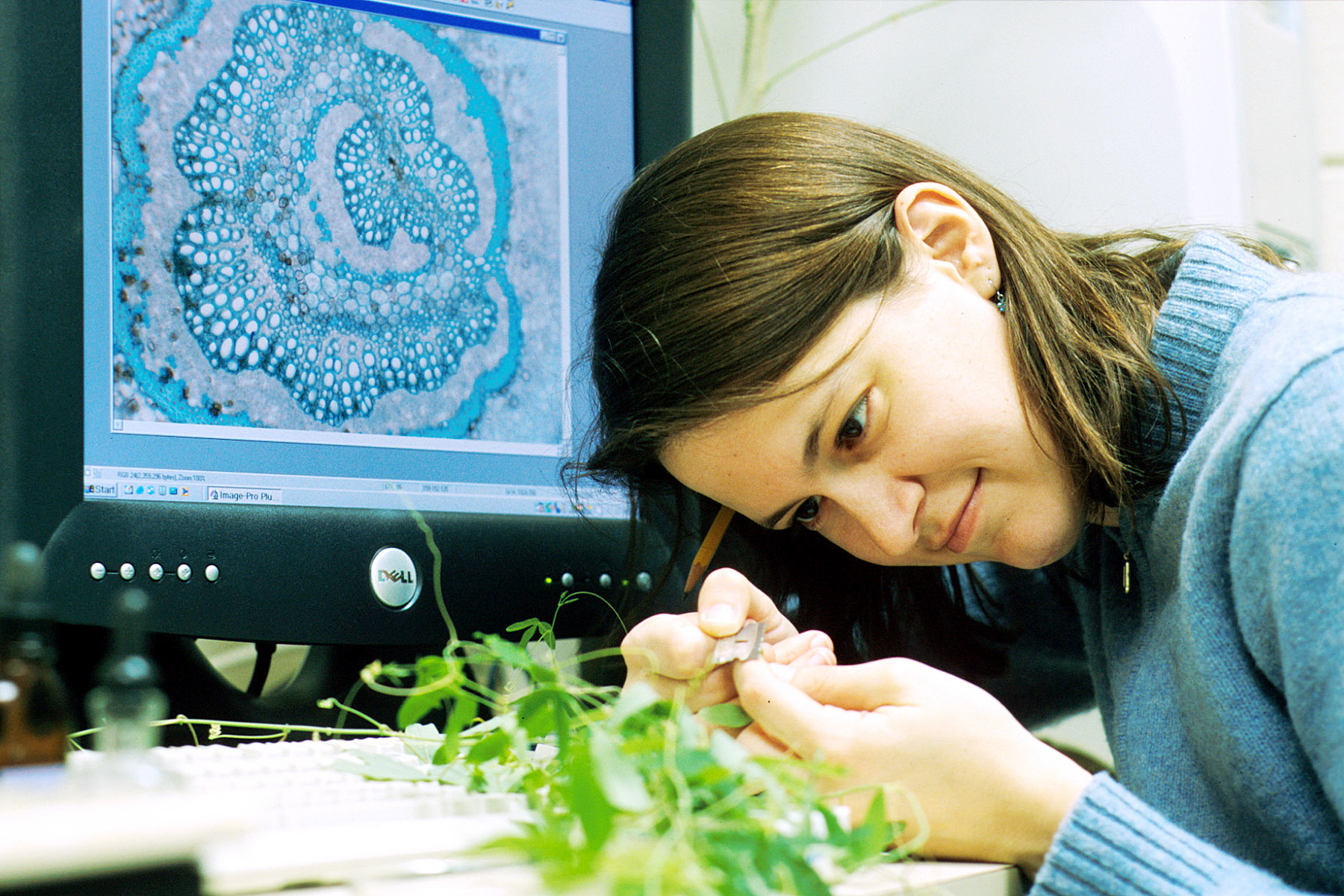 Feburay 26, 2003 — University of Utah researchers spent two years slicing stems and leaves to discover that the plumbing system carrying water through many plants obeys a 1926 law describing how arteries and vessels carry blood in humans and other animals.

“This study shows that plants and animals have reached the same solution for moving fluid most efficiently despite their radically different vascular systems,” says biology doctoral student Kate McCulloh, first author of the study, which is being published in the Feb. 27 issue of the journal Nature.

British biologist Cecil D. Murray devised Murray’s law in 1926 to describe the structure of arteries and vessels that would allow the most efficient flow of blood in animals. The new study suggests many plants follow the law, and thus have water transport systems that share more in common with the animal blood circulatory system than was believed previously.

“We now know plants appear to be following the same rules,” says University of Utah biology Professor John S. Sperry, a co-author of the new study. “The neat thing about this paper is that in the almost 80 years Murray’s law has existed, no one until Kate seriously considered applying it to plants let alone working out the necessary extensions to the law, then taking it a step further and testing how well it actually describes the plants vascular system.”

Murray’s law predicts the manner in which arteries, vessels and capillaries should taper to progressively smaller diameters to optimize the animal circulatory system’s efficiency in moving blood through the body with a minimal amount of friction. McCulloh, Sperry and Fred Adler, an associate professor of mathematics and biology, showed the law also applies to the system of short, overlapping tubes within plants’ water-transporting tissue. Those tubes, which are made of dead cells, are part of the woody plant tissue called xylem.

The researchers say plants that do not follow Murray’s law – and thus have water-transport systems least like animals – include pines, firs and other conifers, and plants with conduits that not only transport water but also support the plant.

Plants evolve the most efficient water transport system possible given competing demands. If water flowing through a plant is maximized, more photosynthesis occurs to convert sunlight to energy, and the faster the plant grows. But Sperry says the plant also wants to minimize the energy and material it puts into building the water conduit system so it can conserve energy for the ultimate goal: reproduction.

“If you are an engineer building a plumbing system, you want to deliver the most water per unit of energy with the least amount of material – the cheapest and most effective conductance system you can design,” he says.

The conventional view of water transport in plants originated with 15th century artist-scientist-engineer-architect Leonardo da Vinci’s proposition that “if you take a tree, the cross section of the trunk should be equal to all the [cross sections of] branches above that trunk added together,” McCulloh says.

In reality, the conduits in plant xylem resemble numerous short pipes, paralleling each other, with their ends offset. Instead of flowing through one continuous conduit, water flows through one vessel, then jogs into another and another and so on.

McCulloh says that in animals, blood flows in an optimal manner that is efficient for a circulatory system in which the aorta, the large artery carrying blood from the heart, branches into progressively smaller arteries, vessels and tiny capillaries. Murray’s law predicts how the diameter of blood vessels should taper out so blood flow is most efficient.

“The easiest way to think of Murray’s law is it is a compromise between maximizing water flow and minimizing the area of the conduits dedicated to that flow,” Sperry says.

Adler explains: “Making really big tubes is great because a lot of water goes through them. But it takes a lot of material to build them. Murray’s law says make medium-sized tubes that aren’t too expensive to build but are pretty good at moving water.”

[Technical detail: Murray’s law specifically says that when the radius (or half the diameter) of the largest artery is cubed, that number will equal the sum of the cubes of the radii of smaller blood vessels at any particular level – arteries, smaller vessels or capillaries – farther downstream in the circulatory system.]

That means a plant does not have a pipe-like system with a constant number of conduits that remain constant in cross-sectional area; instead, the number of plant conduits not only increases from the trunk to the branches and leaves, but the total area of the conduits’ cross sections also increases, McCulloh says.

“Kate has extended Murray’s law to cover the different structure of the plant vascular system,” Sperry says. “She found that even with that difference, plants were still following Murray’s law.”

For two years, McCulloh brought leaves, twigs, stems and branches back to the lab, labeled them, and then used a razor to slice thin cross sections. Then she placed the thin sections under a microscope, taking photos and using image-analysis software to measure the diameters of water conduits.

She measured roughly 100,000 water-bearing conduits in leaves, twigs, stems and branches from ash and boxelder trees and from two vines: Virginia creeper and trumpet creeper. In a single tree, she measured the diameters of 22,000 conduits at various levels, from branches to leaves.

“It was extremely tedious,” she says. “We measured 100,000 conduits and did statistical analysis to see if the data were consistent with Murray’s law, and they were.”

Sperry says it was worth it.

“Kate’s project vastly improves our understanding of how water moves through plants,” he says. “We’re creating information that goes into new editions of biology textbooks. It is increasing knowledge of the natural world.”

Sperry says the researchers plan to examine modern ferns similar to early plants that lived 400 million to 430 million years ago. The question is whether Murray’s law applied to ancestral plants or, more precisely, did the ideal or optimal vascular system evolve right away in early plants or did it evolve slowly over the ages?