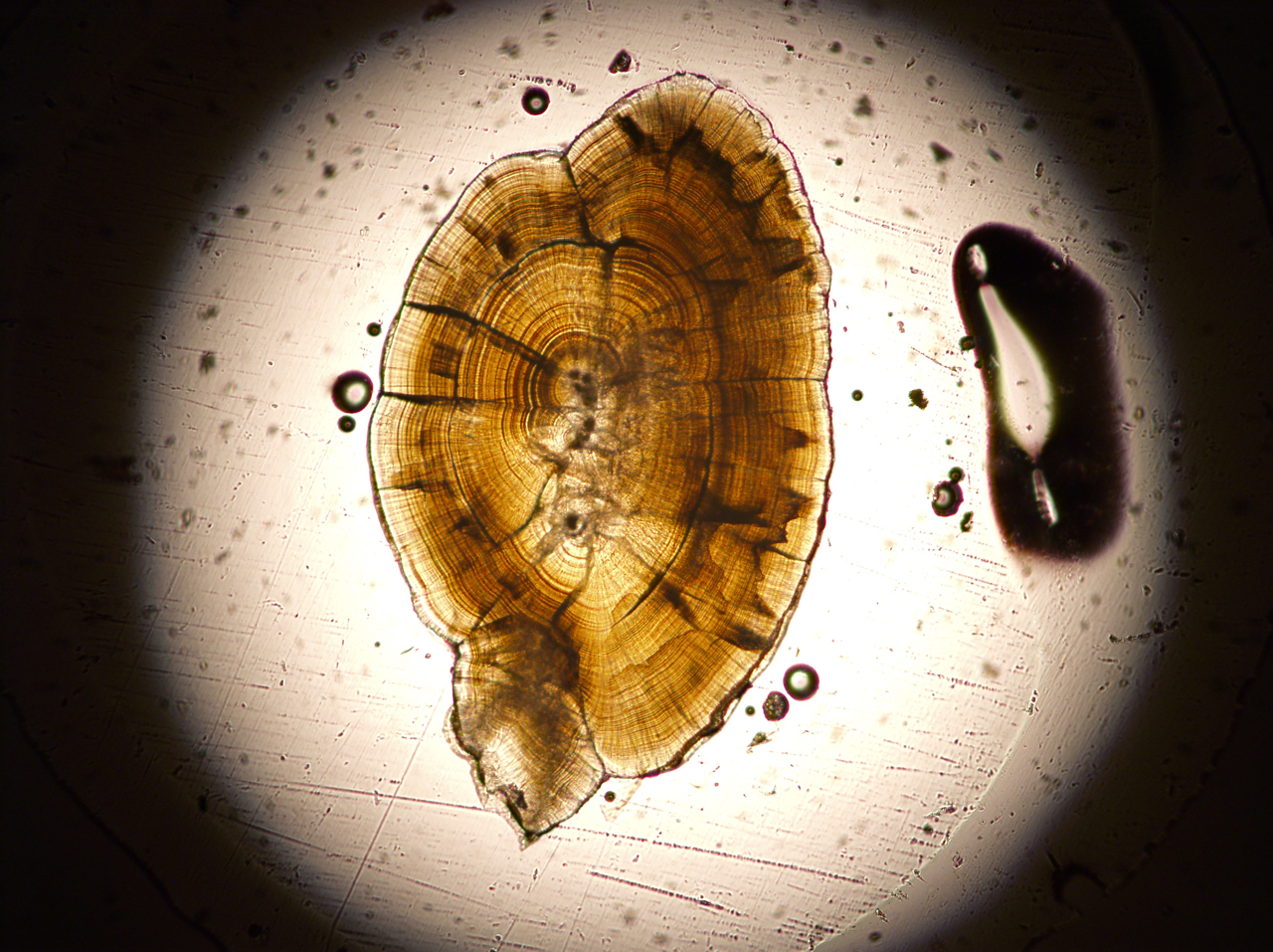 May 15, 2015 – Salmon carry a strontium chemical signature in their “ear bones” that lets scientists identify specific streams where the fish hatched and lived before they were caught at sea. The new tool may help pinpoint critical habitats for fish threatened by climate change, industrial development and overfishing.

“Using this method, we can trace where the salmon were born and where they moved while they were growing in the rivers and streams,” says University of Utah geochemist Diego Fernandez, a co-author of the study published May 15 in the journal Science Advances.  “This could be useful for protecting fish and understanding how many salmon we can take from nature.”

Genetic studies of salmon caught in saltwater previously determined the watershed where fish hatched, but not sets of streams and not where they spent time as they grew, says Thure Cerling, also a University of Utah geochemist and co-author.

In the new study, researchers from the universities of Utah, Washington and Alaska Fairbanks and the U.S. Geological Survey analyzed strontium isotope ratios in otoliths – also known as ear stones or ear bones – from 255 chinook salmon caught in southwestern Alaska’s Bristol Bay. The study determined where the fish hatched and spent time in seven different sets of two to five streams within the watershed of the Nushagak River, western Alaska’s third-largest river.

“Disturbances to salmon populations can range widely from large-scale disturbances due to a rapidly changing climate to smaller-scale disturbances such as habitat loss or contamination from industrial development of the freshwater streams that are the spawning grounds of salmon,” says the study’s lead author, Sean Brennan, a 2007 University Utah biology graduate and now a postdoc at the University of Washington.

“Without knowing which habitats are producing fish and what habitats are used by fish during critical periods of their lives, it is very difficult to understand how populations might respond to some disturbance and to design effective conservation strategies,” says Brennan, who ran the study as a doctoral student at the University of Alaska Fairbanks and a visitor at the University of Utah, where the lab work was done.

He says the study could have important implications in understanding how habitat loss and contamination could affect salmon if the proposed Pebble Mine is built in the headwaters of the Nushagak. Development of the copper, gold and molybdenum mine is opposed by fishers and hunters, environmentalists, local residents and federal regulators.

Brennan, Fernandez and Cerling did the study with Christian Zimmerman of the U.S. Geological Survey in Anchorage, and Megan McPhee and Matthew Wooller of the University of Alaska Fairbanks. The USGS and Alaska Sea Grant funded the study.

Brennan grew up in Salt Lake City, and his parents still live there. As a biology undergrad at the University of Utah, he worked with Cerling and biology professor Jim Ehleringer, who pioneered analysis of various chemical isotope ratios for many uses. Those include tracking the sources of drugs, counterfeit currency and explosives; determining where both people and elephants have lived by analyzing their hair; dating ivory to learn if it is illegal or exempt from bans; and using fossil teeth to analyze the diets of human ancestors and animals during the course of their evolution.

When it is time to reproduce, salmon leave the sea and swim up rivers to spawn and die. The hatchlings grow in freshwater streams, swim to sea and reach adulthood.

The study involved chinook salmon otoliths, the stones found in the ear canals of fish. They are not true bones. Unlike bone, which is calcium phosphate, otoliths are calcium carbonate and function like an inner ear, involved in orientation, balance and sensing sound. They are lozenge-shaped and range up to a half inch in length in salmon.

Otoliths grow new outer layers or bands daily as a juvenile fish matures, and those layers incorporate strontium from stream water where salmon are born and swim. The ratios of strontium-87 to strontium-86 in water – and thus in otoliths – ultimately reflect the ratios in the rocks eroded by the streams.

In earlier research, the scientists sampled water from Nushagak tributaries and otoliths from juvenile salmon and slimy sculpin – fish that stay in place for life – to demonstrate strontium ratios in rocks correlate with those in streams and otoliths.

In the new study, Brennan collected otoliths from chinook salmon unloaded from boats at the Peter Pan Seafoods cannery in Dillingham, Alaska. It was the sockeye salmon season, and the chinook were incidental bycatch in that fishery.

At the University of Utah, the otoliths were cut lengthwise. Then a laser zapped each otolith repeatedly, from the inner to outer layer, providing samples with changing strontium isotope ratios from the time the fish hatched until after it entered the sea.

“There are literally thousands of measurements on each otolith,” Cerling says.

Fernandez adds: “They’re like microexplosions. You create tiny, tiny particles that are carried into the mass spectrometer.” By showing how the ratio of strontium-87 to strontium-86 changed over time, “we get the entire life history of the salmon,” he says.

The study revealed where each fish was hatched and lived on a map showing seven different color-coded sets of streams in the 90-by-150-mile Nushagak watershed. Each color represents a range of strontium isotope ratios.

Cerling says the ratios vary because the rocks closer to Bristol Bay are Aleutian arc volcanics, while rocks farther north are much older, sedimentary rocks.

“If you know some percentage goes to a stream you know that stream is important,” Fernandez says.

The proportion of chinook salmon from each of the seven different streams or stream groups correlated well with the estimated amount of habitat in each of those areas.

During the three days when Brennan collected chinook, the proportion of the salmon from some of the streams increased, while it decreased in other tributaries, mainly the upper regions of the Nushagak watershed.

Tracking the fish by their strontium isotope ratios revealed the chinook salmon had four distinct life histories: 72 percent of the fish stayed where they hatched until they swam downstream to Bristol Bay and the Pacific; 17 percent stayed mostly where they hatched, except for short forays downstream in the lower Nushagak River just before swimming to sea; 7 percent swam to another stream from where they hatched, then stayed there until going to sea; and 4 percent left their birthplace for another stream, and then made a foray into the lower river before heading for sea.

Cerling notes almost 30 percent of the salmon had a more complex life history than simply hatching and growing up in one place. The study “provides a baseline of how this watershed is used by the fish at this time – a baseline for future comparison related to climate change, overfishing or other environmental stresses,” he adds.