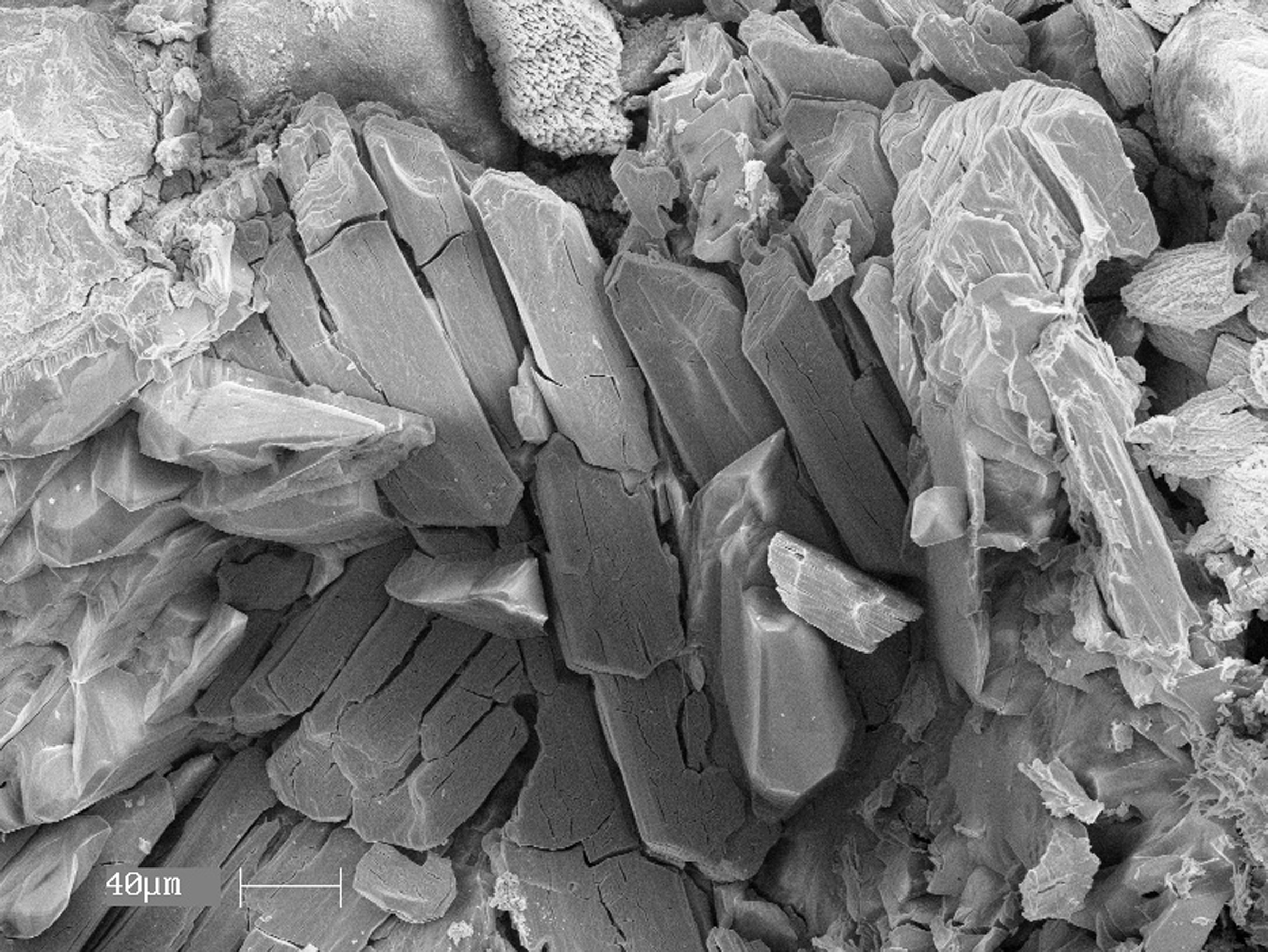 May 14, 2013 – A new bluish-green mineral discovered in abandoned uranium mines in Colorado and Utah has been named nashite in honor of University of Utah geology and geophysics Professor Barbara Nash, who has studied related minerals.

“I’m thrilled and honored to have received this recognition from my colleagues,” says Nash. “But I can understand that for most people it probably isn’t obvious just how satisfying it can be to have ‘ite’ added to your last name.”

The mineral was named for Nash by Salt Lake City mineral collector Joe Marty, a retired medical technologist at the University of Utah School of Medicine, and three other researchers who wrote a study describing and characterizing nashite.

“Since she has been so involved in describing these new minerals, the authors felt it was important for her to be recognized,” says Marty, who explores old mines and also discovered related “decavanadate” minerals named rakovanite, hughesite, postite and gunterite.

Marty discovered nashite in April 2010 on sandstone blocks in the St. Jude mine in the Slick Rock mining district of San Miguel County, Colo. But crystals of nashite good enough to be analyzed were not collected until February 2011, when Marty found them in the Little Eva mine in the Yellow Cat mining district of Grand County, Utah.

Nash is known for her study of the origin and chemistry of volcanic rocks, including those spewed by massive eruptions of the Yellowstone hotspot during the past 16 million years. She also has done extensive chemical analysis of the other vanadium minerals found by Marty.

Nashite – like the other vanadium minerals called decavanadates – comes from the Colorado-Utah uranium-vanadium or “uravan” mineral belt. But unlike most of the group’s other minerals, which are brilliant orange, nashite is transparent bluish-green with a light bluish-green streak.

That unusual color results from the fact that nashite is the first known decavanadate mineral to exhibit an unusual atomic arrangement known as an “intravalence charge transfer” between the mineral’s vanadium atoms.

Nashite’s chemical formula is Na3Ca2[(V4+V5+9)O28].24H2O, and Nash says it can be referred to as sodium calcium vanadate.

Since 1970, Nash has directed the University of Utah’s Electron Microprobe Laboratory, which uses a focused electron beam and X-ray spectroscopy to measure the amounts of specific elements within solid materials, and thus identify the chemical makeup of those materials.

The decavanadate minerals are “secondary minerals” because they form when oxygen in air reacts with vanadium ore bodies near the surface in old, damp mines. Nash helped analyze other decavanadates that Marty discovered before nashite,

They formed in a moist environment and contain water in their crystal structure, which means it was a challenge for Nash to analyze them because they tend to dry out and get damaged in the microprobe’s vacuum chamber.

There are about 5,000 kinds of minerals described by science, says Marty, who estimates he has about 2,000 of them among his collection of 10,000 specimens. Marty was a clinical assistant professor of pathology at the medical school until his retirement.    He said his interest in looking at biological samples under a microscope expanded to examining minerals around 1990, and he since has discovered about 30 new minerals – mostly vanadium and tellurium minerals.

After Marty proposed nashite’s name, it was approved last year by the International Mineralogical Association. Then, nashite’s chemical makeup, physical properties, crystal structure and other characteristics were outlined in a formal scientific paper published in February 2013 in the Canadian Mineralogist.

Co-authors of that study were Marty; Anthony Kampf, of the Natural History museum of Los Angeles County; John M. Hughes of the University of Vermont; and Frank Brown, professor of geology and geophysics and dean of the University of Utah College of Mines and Earth Sciences.

Marty previously named hughesite for Hughes, a geologist and former provost and senior vice president at Vermont.  Brown did the microprobe analysis of nashite because, “the rules don’t allow you to describe a mineral that is named after you,” Nash says.