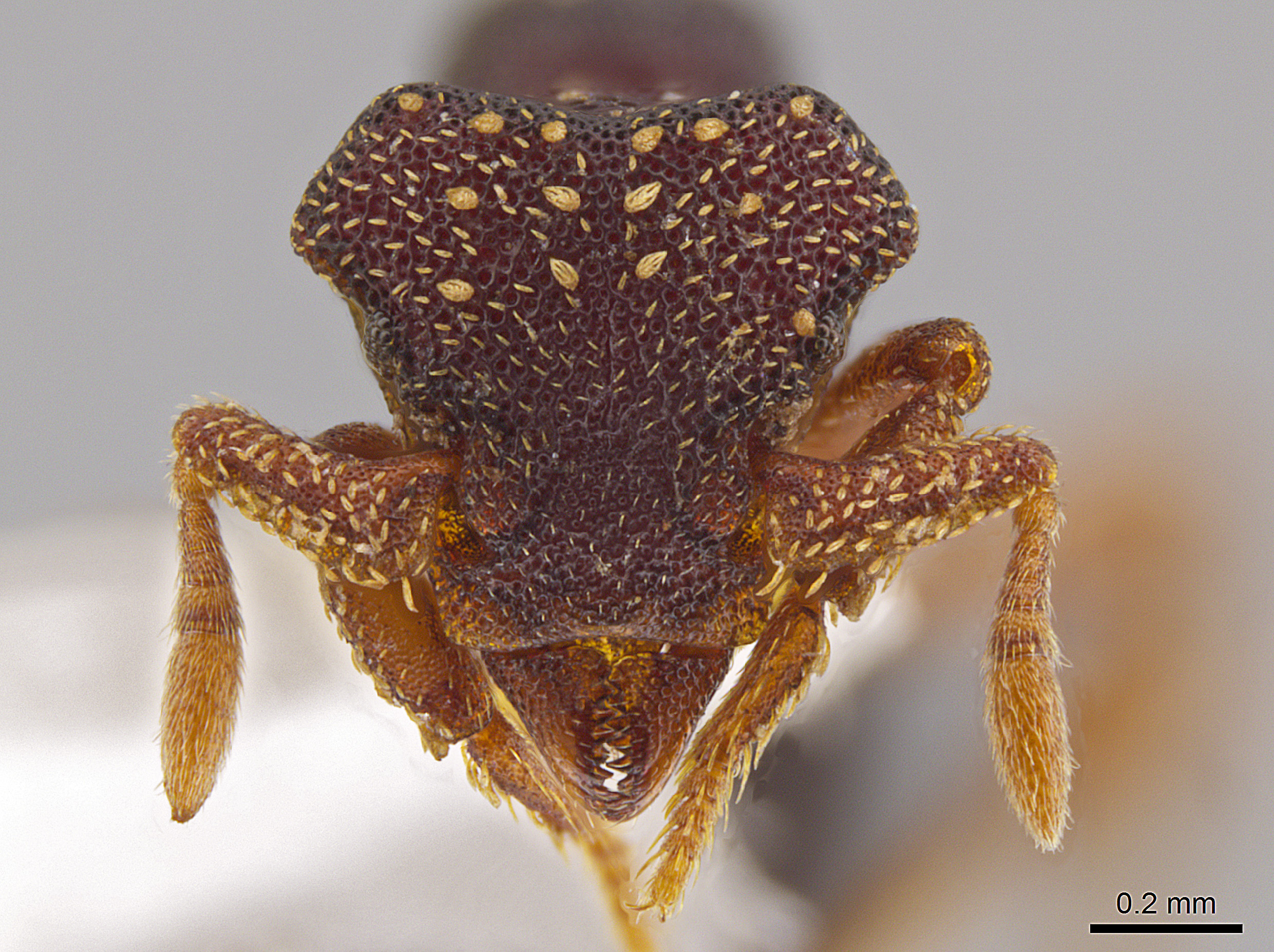 July 29, 2013 – A University of Utah biologist has identified 33 new species of predatory ants in Central America and the Caribbean, and named about a third of the tiny but monstrous-looking insects after ancient Mayan lords and demons.

“These new ant species are the stuff of nightmares” when viewed under a microscope, says entomologist Jack Longino, a professor of biology. “Their faces are broad shields, the eyes reduced to tiny points at the edges and the fierce jaws bristling with sharp teeth.

“They look a little like the monster in ‘Alien.’ They’re horrifying to look at up close. That’s sort of what makes them fun.”

In a study published online Monday, July 29 in the journal Zootaxa, Longino identified and named 14 new species of the ant genus Eurhopalothrix and distinguished them from 14 other previously known species. The genus name is Greek and refers to the club-shaped hairs on many Eurhopalothrix (pronounced you-row-pal-oh-thrix) species.

In another upcoming study accepted for publication in the same journal, Longino identified 19 new ant species from the genus Octostruma (pronounced oct-oh-strew-ma) and described differences from 15 other previously known species. The genus name means “eight swellings” for the ants’ eight-segmented antennas.

“The new species were found mostly in small patches of forest that remain in a largely agricultural landscape, highlighting the importance of forest conservation efforts in Central America,” Longino says.

The new ant species are less than one-twelfth to one-twenty-fifth of an inch long – much smaller than a rice grain or common half-inch-long household ants – and live in the rotting wood and dead leaves that litter the forest floors in Central America.

“They are nearly eyeless and crawl around in leaf litter,” using primitive compound eyes to detect light but not form images. No one knows how they find their prey, presumed to be soft-bodied insects, spiders, millipedes and centipedes. But the ants are known to coat themselves with a thin layer of clay, believed to serve as camouflage.

Among the newly discovered and named species from forest-floor leaf litter:

— Eurhopalothrix zipacna, named for a violent, crocodile-like Mayan demon and found in Guatemala and Honduras.

— Eurhopalothrix xibalba, or a “place of fear,” for the underworld ruled by death gods in certain Mayan mythology. It lives from Honduras to Costa Rica.

— Eurhopalothrix hunhau, for a major Mayan death god and a lord of the underworld. This species lives in Mexico and Guatemala.

Some of the scary looking new species have more mundane names, such as Eurhopalothrix semicapillum, named for partial patches of hair on its face, and Octostruma convallis, named after the curved groove across its face.

Longino named one species Eurhopalothrix ortizae, after Patricia Ortiz, a Costa Rican naturalist who died in a rock-fall accident this year.

The horror-show faces of some of the new species feature what is known as the labrum, which is like an upper lip, and jaws that open and close sideways instead of up and down as teeth on the jaws clamp down on prey.

“If you really want a movie monster that freaks people out, have the jaws go side to side,” Longino says.

“Ants are everywhere,” Longino says. “They are one of the big elements of ecosystems, like birds and trees. They are major movers of stuff. Some act as predators and influence the population sizes of other insects by eating them. They gather a lot of dead insects and eat them, so they are like vultures at a microscale. They move seeds around and have a big impact on what kind of plants grow where. They aerate soil and do a lot of excavation. Having aerated soil is good for plants – it lets oxygen get into the soil and water percolate through it better.”

So far, there are about 15,000 known species of ants worldwide, based largely on difference in body structure, and perhaps as many as 30,000. But as geneticists analyze more and more ants, new genetic differences are becoming apparent, and so “there could be 100,000 ant species,” Longino said.

The world has some 700,000 known insect species, but that number likely will climb much higher as more are discovered. Longino says “70 percent to 80 percent of all known species are insects.”

The 33 new species bring the number of ant species Longino has discovered during his career to 131.

The adult ants eat only liquids, not solid food. So they bring their prey back to the nest, where it is eaten by ant larvae, which regurgitate it so it can be consumed by the adults, Longino says.

Most modern ants no longer are predators, some of which use venoms to sting their prey, but instead are scavengers like those that pick up crumbs off kitchen floors, and spray formic acid to fight off other ants.

Longino collected about 90 percent of the ants in his new studies during the past 30 years working on a series of projects to inventory insects, spiders and other arthropods in Costa Rica, Mexico, Nicaragua, Guatemala and Honduras. Many of the species also are in the Caribbean and South America.

He says that his job as a taxonomist is not only to find and describe new species, but to “map” all species, old and new, to shed light on Earth’s biodiversity and identify possible pest species and other species that might be used to control pests. (The new ant species are not agricultural pests.)

To collect insects, Longino and his students use sifting devices that look somewhat like a pair of tennis rackets with canvas bags beneath them. The researchers use machetes to chop up dead wood and leaf litter and pour it through sifters, which have wire mesh with third-inch-wide openings. The tiny ants end up in the collection bags with what looks like potting soil. This mixture then is placed in mesh bags suspended over funnels that, in turn, are above plastic bags containing alcohol to kill and preserve the ants that pass through the mesh bags. The ants then are brought home for analysis.

Taxonomy, or classification of living things, is in frequent flux. Longino says he thinks of species as hypotheses, not definite, never-changing labels. He is seeking funding for genetics research to better analyze and perhaps redefine classifications for ants in four or five ant genuses or genera. Some species are likely to end up in a different genus after such research is done, he says.