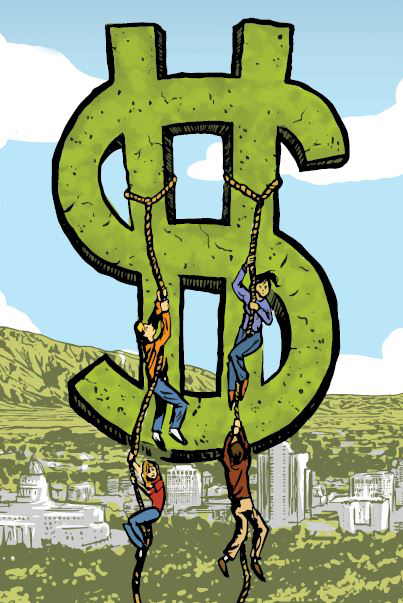 Oct. 30, 2014 – Although the economy is relatively strong in Salt Lake City and Utah, a recent study by University of Utah Honors College students concludes the region’s advantage as one of the “least unequal cities in the country” in terms of income parity could be deteriorating, putting the middle class – and the community – at risk.

The newly released report, titled Middle Class on the Ropes, is the result of a yearlong project by undergraduate students in the Honors College Praxis Lab program.

“We hope to raise awareness of the growing gap in income equality in Utah and the nation,” said Jess Esplin, Honors College student and one of the authors of the report. “The economic well-being, political and social cohesion of our community is at risk. The point of our research is not just data, but action.” To that end, each chapter in the report ends with a “What Can Be Done?” section, which highlights possible actions to address the issues identified there.

Results of the study will be presented and discussed at a free, public community meeting on Thursday, Nov. 6, 2014, from 5:30 – 7 p.m., at the Gould Auditorium in the J. Willard Marriott Library on the University of Utah campus.

Students will present their findings and recommendations and Robert Heufner, professor emeritus of political science at the U, will moderate a panel discussion, including audience Q&A. The event is free and open to the public; community members interested in economic position and income equality are encouraged to attend by emailing Emily Wallis.

“Praxis is derived from an Ancient Greek word, meaning theory plus action, which is what these students experience as they research, engage and apply classroom knowledge to real-life issues, as they do in this class,” explains Norman Waitzman, professor of economics at the U and co-teacher of the course.

WHY IS THE MIDDLE CLASS IMPORTANT?

The authors conclude that the health of the middle class is important for all sectors of the economy.

The middle class in America once thrived on equality of opportunity and on the promise that hard work would better one’s economic position—the American dream. And for decades it has done, creating a new era in American society, marked by increasing wages and productivity, economic mobility, growing diversity and increasing civic engagement among others. Therefore, given its role as a social and economic anchor, the recent shifts in earning power triggered by job contraction, decreasing wages and increasing family debt put pressures on the middle class that could be destabilizing to the community. Even though Salt Lake City is in a relatively favorable economic position – with some of the lowest tuition rates in the nation, a haven for startup companies and the lowest level of income inequality in the country – students’ interviews and research indicate that Utah may be catching up with the rest of the country with lopsided real income growth.

The authors warn that without immediate action from both community members and government officials, the city’s favorable position may deteriorate with negative impacts. They propose the following key actions on employment, education and social welfare programs to help reinforce the economy:

Honors College Praxis labs draw students from all disciplines to collaborate on innovative project-based solutions to pressing societal challenges. Under the guidance of distinguished faculty and community leaders, students analyze a topic through in-depth classroom and field research such as lectures, panels, one-on-one interviews, readings and off-campus trips. After problems have been identified and solutions developed, students work together to translate theory into action with wide-ranging, measurable impacts in the community. Topics vary each year, but fall under three focus areas: health and society, energy and environment and social justice.