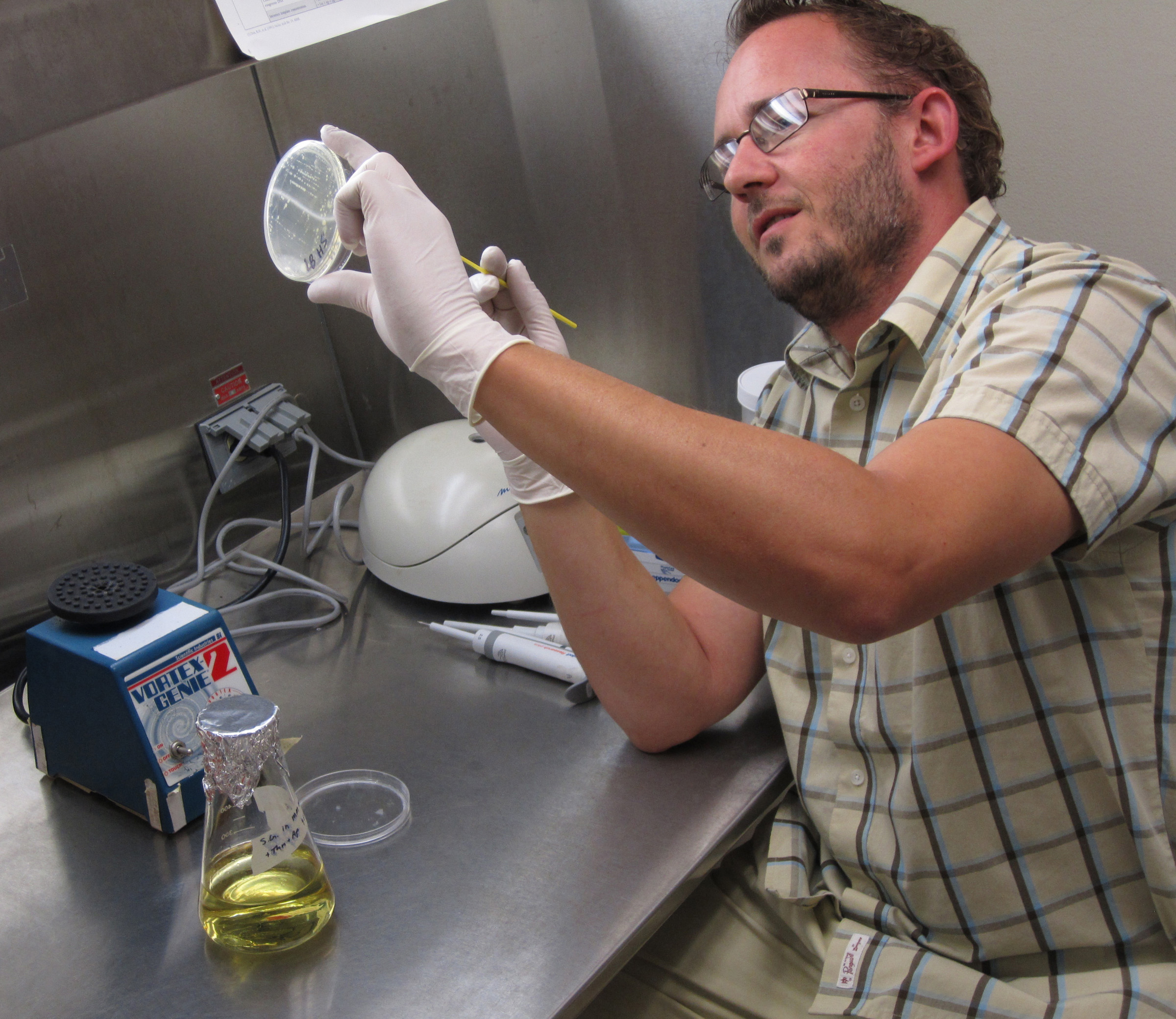 Nov. 15, 2012 – Two years ago, a 71-year-old Indiana man impaled his hand on a branch after cutting down a dead crab apple tree, causing an infection that led University of Utah scientists to discover a new bacterium and solve a mystery about how bacteria came to live inside insects.

Because the new bacterial strain is easy to grow in the laboratory and is related to Sodalis, a genus of bacteria that lives symbiotically inside insects’ guts, it may be possible to genetically alter the new bacteria so they can block disease transmission by insects like tsetse flies and prevent crop damage by insect-borne viruses.

“If we can genetically modify a bacterium that could be put back into insects, it could be used as a way to combat diseases transmitted by those insects,” says Adam Clayton, a University of Utah Ph.D. student in biology and a first author of a study unveiling the new bacterium and its genome or “genetic blueprint.”

The study will be published Thursday, Nov. 15 in the Public Library of Science’s online journal PLoS Genetics.

It “shows the origin of the mutually beneficial symbiotic relationship between bacteria and insects,” says biology Ph.D. student Kelly Oakeson, the study’s other first author. “There are bacteria in the environment that form symbiotic relationships with insects. This is the first time such a bacterium has been found and studied.”

Colin Dale, the study’s senior author and an associate professor of biology, says the findings provide “a missing link in our understanding of how beneficial insect-bacteria relationships originate. Our work shows specifically that these relationships arise independently in each insect. This is a surprising conclusion: the insect picks up a pathogen that is widespread in the environment and then domesticates it. This happens independently in each insect.”

A competing theory is that parasitic wasps and mites spread symbiotic bacteria from one insect to another. Dale says that theory cannot explain why such similar types of bacteria are found in insects that differ widely in location and diet, including insects that feed either on plants or animals.

The new study supports the theory that insects are infected by pathogenic bacteria from plants or animals in their environment, and that the bacteria evolve to become less virulent and provide benefits to the insect. Then, instead of spreading from one insect to another, the bacteria are spread from mother insects to their offspring.

Various bacteria live symbiotically in blood or fat cells or special structures attached to the guts of as many as 10 percent of all insects. The bacteria gain shelter and nutrition from their insect hosts, and they produce nutrients – notably B vitamins and amino acids – to help feed the insects. Sometimes they also produce toxins to kill other invaders, such as fungi or the eggs laid within an insect by a parasitic wasp.

Sodalis is only one of several types of bacteria that live in insects. Symbiotic bacteria are known for having the smallest genetic blueprints or genomes of any cellular organism because as they evolve comfortably within an insect, they lose genes no longer needed for survival outside the insect.

The study discovered a new bacterium from the Indiana man’s wound – a strain the researchers call HS, based on Clayton referring to it as “human Sodalis.” The researchers sequenced its genome, showing HS has a relatively large genetic blueprint and is closely related to Sodalis-like bacteria that have smaller genomes and live in many species of insects – implying that they all descended from a bacterium like HS.

How a Retired Inventor’s Impaled Hand Led to New Science

On Oct. 15, 2010, Thomas Fritz – a retired inventor, engineer and volunteer firefighter – cut down a dead, 10-foot-tall crab apple tree outside his home near Evansville, Ind. As he dragged away the debris, he got tangled in it and fell. A small branch impaled his right hand in the fleshy web between the thumb and index finger.

A former emergency medical technician, Fritz dressed the wound, which became swollen, and then he waited for a scheduled semiannual exam with his doctor a few days later. By then, a cyst had formed at the wound site. The doctor put Fritz on an antibiotic after aspirating a fluid sample from the cyst and sending it to a lab.

The pain and swelling persisted and the wound became abscessed. About five weeks after the accident, an orthopedic surgeon removed several pieces of bark from the wound, which finally healed without further incident.

Only later did Fritz find out that the infected fluid from his wound contained the previously unknown HS bacteria that revealed how insects domesticated bacteria.

“Being kind of a scientist, I thought, ‘Okay, this is how things happen sometimes,’” says Fritz, now 73. “I have strong faith, and I think God did this for a purpose – gaining of additional knowledge – and that’s wonderful.”

Identifying a New Strain of Bacteria

The lab that first received fluid from Fritz’ infected wound couldn’t identify the bacterium isolated from it. So the organism was shipped to ARUP Laboratories, a national pathology reference library operated by the University of Utah.

Discovering new bacteria isn’t unusual, says microbiologist Fisher, ARUP’s medical director of bacteriology and antimicrobial testing. A 2008 study found 215 new bacterial species in samples sent to clinical labs during 2001-2007. In a study earlier this year, Fisher and colleagues found up to 673 new species of bacteria among more than 26,000 clinical samples analyzed during 2006-2010.

An automated analysis at ARUP said the bacterium from Fritz was E. coli, but Fisher says that medical technologists doubted those results.

“We had close matches for it, but none were validly described species. In fact, one of the matches mentioned endosymbionts related to Sodalis,” Fisher says. “It caught my eye because I knew Colin Dale worked on Sodalis.”

Dale discovered and named Sodalis in 1999. He says genetic sequencing showed the HS bacterium is related to bacteria that live symbiotically in 17 different insect species, including tsetse flies, weevils, bird lice and stinkbugs, and is most closely related to bacteria in the chestnut weevil and a stinkbug species.

The study compared the genomes of strain HS; Sodalis glossinidius, which lives in tsetse flies; and another Sodalis-like bacterium that lives in grain weevils.      Compared with HS, the other two bacterial species have lost or deactivated about half their genes. Analysis shows the rice weevil bacterium was domesticate by the weevil at least 28,000 years ago, and Sodalis glossinidius at some earlier date within the past 100,000 years – much more recently than once thought, Dale says.

A Way to Block Some Insect-Spread Diseases?

So it may be possible to insert genes in HS and then place the bacteria in tsetse flies to kill the protozoan parasites that live in the flies and cause sleeping sickness among people and domestic animals in sub-Saharan Africa, Dale says.

Aphids transmit many plant viruses that attack soybeans, alfalfa, beets, beans and peanuts. Replacing their normal symbiotic bacteria with a genetically engineered strain of HS could interfere with disease transmission by aphids and other insects, he adds.

The study speculates that in addition to the HS bacterium, there likely are many other undiscovered bacteria in the environment that could form symbiotic relationships with insects.

“We have identified very few of the bacteria that exist in nature, and new species and strains like HS are often only discovered when they infect humans.”