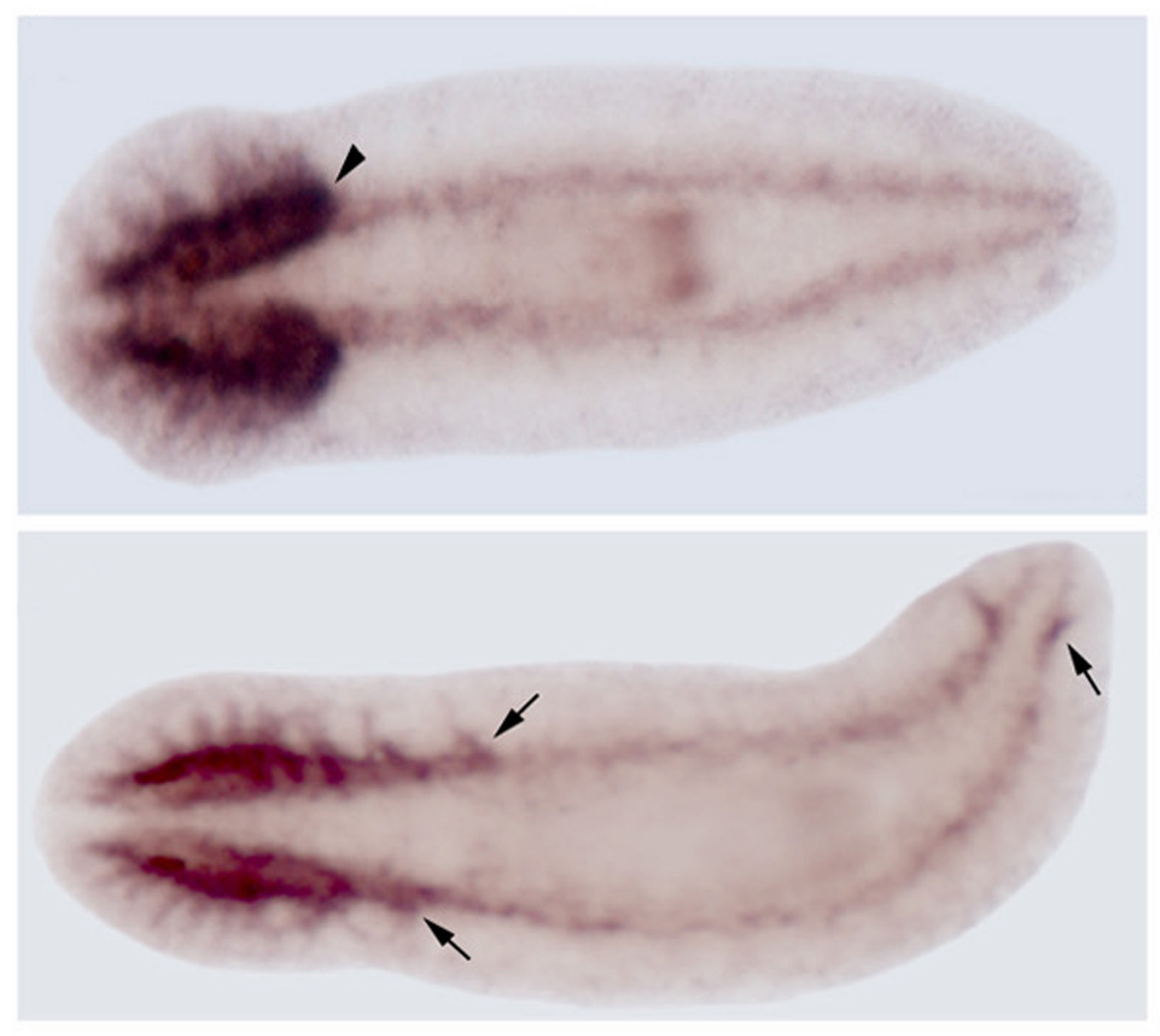 October 9, 2002 — Scientists at the University of Utah and in Japan have discovered a gene that ensures the flatworm’s brain develops within its head. When the “brains everywhere” gene is silenced, brain material develops throughout the body, including the worm’s tail.

The human version of the gene probably is not involved in keeping the human brain inside the skull, but likely plays some other role in nervous system development in human embryos, says Alejandro Sánchez Alvarado, a developmental biologist at the University of Utah School of Medicine.

“We have identified a gene in flatworms that is present in humans and for which no function was known,” Sánchez Alvarado says. “The gene plays a role in making the brain develop in the right part of the worm: the head. When this gene is silenced, brain material was detected in regions of the flatworm other than the head.”

The flatworm gene is named ndk, short for “nou-darake,” which means “brains everywhere” in Japanese.

Flatworms, also known as planarians, grow about a quarter-inch long and live in fresh and ocean water and soil. They reproduce by attaching their tail to a solid object, then the head and upper part of the body swim away. The head regrows a tail, and the tail regrows a head. Such regeneration also occurs if flatworms are chopped into pieces. Each piece regenerates to form a new worm.

The study, published Oct. 10 in the British journal Nature, “may help us to understand how we can rebuild organs and tissues after injury, disease or aging,” the researchers wrote.

Sánchez Alvarado, an associate professor of neurobiology and anatomy, is the study’s second senior author after Kiyokazu Agata, a developmental biologist at the Center for Developmental Biology in Kobe, Japan.

Sánchez Alvarado wants to understand the molecular events guiding regeneration by studying the process in a simple organism: the flatworm. The new study examined where brain material developed when a worm regenerated after having its head or tail amputated.

Regeneration occurs in adult organisms such as flatworms, but involves some of the same processes as embryo development. But regeneration has not been studied as much as developmental biology because of the difficulty of breeding regenerating organisms like flatworms, salamanders and hydra – a necessary step for learning what genes do by “knocking out” a gene and determining what goes wrong without it.

So the study used newer methods of studying genes of the flatworm species Dugesia japonica, and thus “demonstrates the flatworms can be used to discover genes and show what they do,” Sánchez Alvarado says.


The main findings and methods

In the study’s first step, the researchers used “microarrays” made of glass slides containing flatworm genes. The microarrays contained 1,640 flatworm genes out of 13,000 to 18,000 believed to exist. By exposing the slides to dye-tagged genetic material from various portions of the flatworm, the scientists were able to identify which genes were active or “expressed” in the head. The most active gene in the head was ndk.

The scientists confirmed ndk’s activity in the head using a technique called “whole-mount in situ hybridization” developed for flatworms by Agata. A flatworm is killed and injected with a genetic “probe” attached to dye. The dye showed the ndk gene was active in the worm’s head.

Next, the researchers used a method called “RNA silencing” or “gene silencing” to deactivate the ndk gene, show what goes wrong without it and thus learn its normal function.

Before moving to the University of Utah in 2001, Sánchez Alvarado worked at the Carnegie Institution of Washington, where in 1999 he published a study showing that flatworm genes could be deactivated using gene silencing. A gene works by carrying the blueprint or code to produce a protein. Gene silencing involves injecting an organism with genetic material known as double-stranded RNA, which stops the gene from making a protein.

Sánchez Alvarado says he and his colleagues initially thought that silencing the ndk gene would leave decapitated flatworms unable to regenerate a head. They were surprised when deactivating ndk instead prompted development of brain material throughout the body.

“We saw an expansion of the brain and the appearance of brain material throughout the worm,” he says. “We saw brain in the tail.”

Silencing the ndk gene also produced flatworms with more than the normal pair of primitive eyes known as “eyespots.” So not only did brain material develop everywhere, but extra working eyespots appeared halfway down the flatworms’ bodies.

Technical details on how the gene works

The study also investigated how the ndk or “brains everywhere” gene works, revealing that it produces a protein quite similar to “fibroblast growth factor receptors” (FGFRs) in organisms ranging from flatworms to humans.

Fibroblast growth factor or FGF promotes the proliferation and growth of cells and their development into various kinds of cells. Flatworms are able to regenerate missing heads, tails or other body parts because they have “totipotent” stem cells, which are cells that can develop into any kind of cell within the organism.

For FGF to promote cell development, it must attach to receptors on a cell so the cell receives and carries out the order to develop and grow. These receptors are the FGFRs.

The study showed that the ndk gene produces a protein, called NDK, that resembles the FGFRs, but with one important difference: when a growth factor attaches to NDK, the orders to grow and develop are not carried into the cell.

Sánchez Alvarado believes the ndk gene uses that difference to prevent brain material from developing outside the flatworm’s head. When a flatworm is cut up and starts to regenerate, the growth factor attaches to receptors in the head so the brain develops. But the ndk gene makes the NDK protein, which acts like a sponge that absorbs growth factor so it cannot spread outside the head and make brain matter develop elsewhere.

When the ndk gene was silenced or deactivated, brain material developed elsewhere in the worm’s body. Sánchez Alvarado believes that is because growth factor was not absorbed by NDK in the head, and thus spread throughout the body to induce formation of brain matter.

Sánchez Alvarado says ndk is the flatworm equivalent of the human fibroblast growth factor receptor gene known as fgfrl1. What that gene does is unknown. Flatworm and human brains are so different that the human gene probably is not involved in keeping our brains in our skulls, he says. The study suggests the human gene likely “has something to do with central nervous system development in people, but what we don’t know.”

Another part of the study involved frog embryos instead of flatworms. That is because scientists cannot yet genetically engineer a flatworm to add an extra ndk gene. The researchers genetically engineered early frog embryos to have too much of the gene. Those embryos failed to develop certain body tissues that normally develop due to fibroblast growth factors. So the experiment provided more evidence that the ndk gene controls brain and tissue development by soaking up growth factor.

In addition to Sánchez Alvarado and Agata, co-authors of the study are Francesc Cebria, Chiyoko Kobayashi and Yoshihiko Umesono of the Center for Developmental Biology in Kobe; Masumi Nakazawa, Katsuhiko Mineta, Kazuho Ikeo and Takashi Gojobori at Japan’s National Institute of Genetics; and Mari Itoh and Masanori Taira at the University of Tokyo.