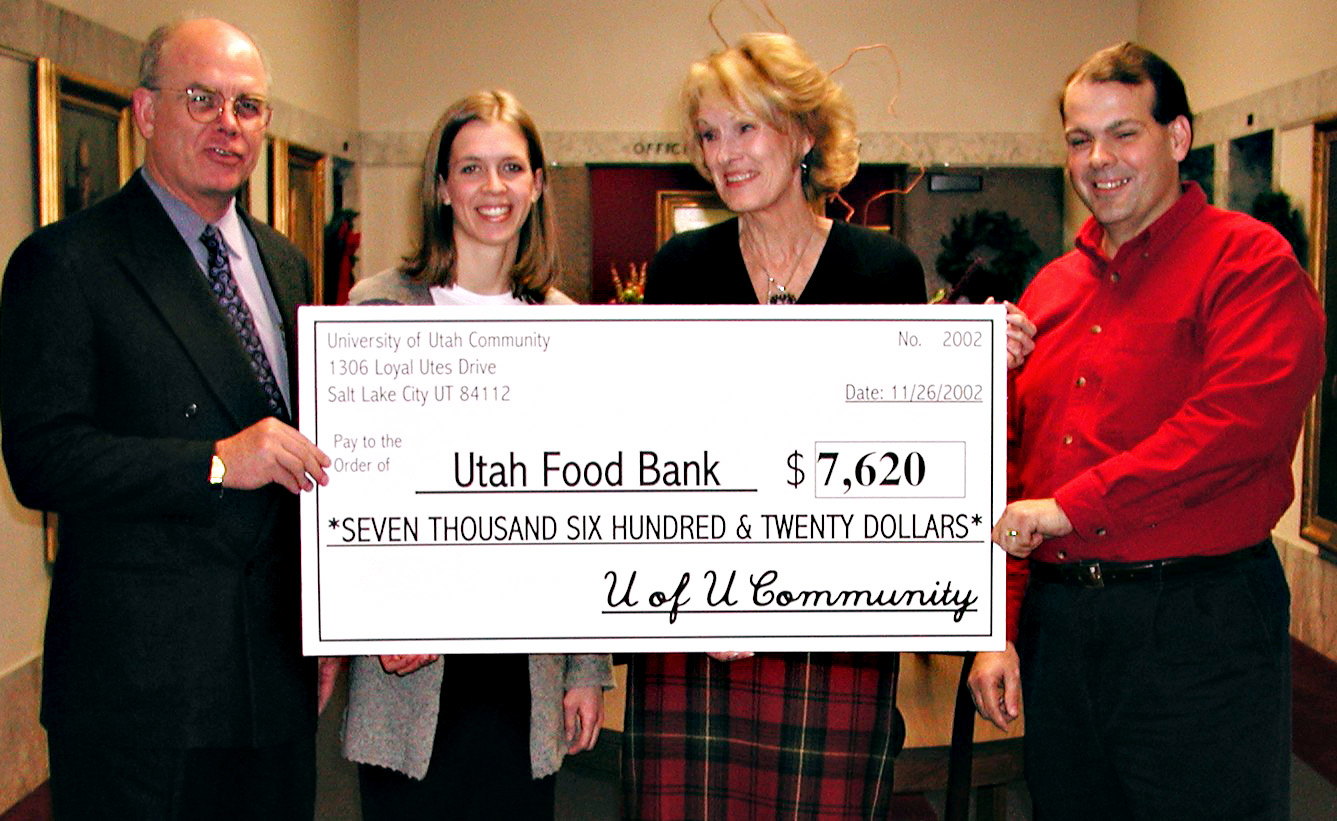 November 27, 2002 — One outcome of last Saturday’s football game in which the Utes beat BYU 13 to 6 is the contribution that University of Utah students, faculty, staff and fans will make to the Utah Food Bank. During the two weeks prior to the “Holy War” football game, Ute fans and campus members contributed truckloads of food items and $7,620 in cash to the tenth annual Utah-BYU Food Drive. The University of Utah and BYU Alumni Associations sponsored the project.

Food donations for the drive were deposited at campus drop-off spots and monetary contributions were made at the U’s Alumni House, via mail, over the Internet and by fans that earmarked donations at Smith’s Food & Drug Stores. While BYU is still computing overall totals — and the amount of canned goods for both schools is still being calculated, Utah fans donated $1,611 at Smith’s stores compared to $1,557 from BYU fans. Last Saturday, $4,867 of the total was collected from fans as they entered the gates of Rice-Eccles Stadium.

As in past years, all food and money from the Utah-BYU Food Drive will be donated to the Utah Food Bank, a non-profit agency that distributes goods to all 70 Utah food pantries that service 212 charitable agencies throughout Utah. Agencies served by the pantries respond to more than 73,000 Utahns who request emergency service monthly. One-third of those needing help are children.

“The food and cash collected during Rivalry Week will help the Utah Food Bank serve the increasing number of those in need during the holidays,” notes John Fackler, director of business relations for the U’s Alumni Association. “Although bitter rivals, over the past nine years, Utah and BYU fans have cooperatively donated thousands and thousands of pounds of food to the Utah Food Bank, the result of a marvelous tradition to see which school can collect the most food just prior to the yearly football game.”

Utah Food Bank Director Jim Pugh says donations from the campus-wide food drive are a tremendous help to the agency. “The drive also raises college students’ awareness of the low-income groups we serve,” he says. “By participating, students realize that there are small ways they can give back to the community. They can donate a few cans of food off their shelves or contribute a couple of dollars. Every contribution-even a small one-has an impact.”

Through a community drive, the Utah Food Bank hopes to collect 1.5 million pounds of food this holiday season. The agency kicked off the drive Oct. 15 and will end it on Dec. 31. “As of today, we have had 600,000 pounds of food donated-so we’re one-third of the way there,” Pugh says, adding that donations of time and money are still being encouraged and accepted. For more information on how to volunteer at the agency or where to send contributions, contact the Utah Food Bank at 801-908-8660.