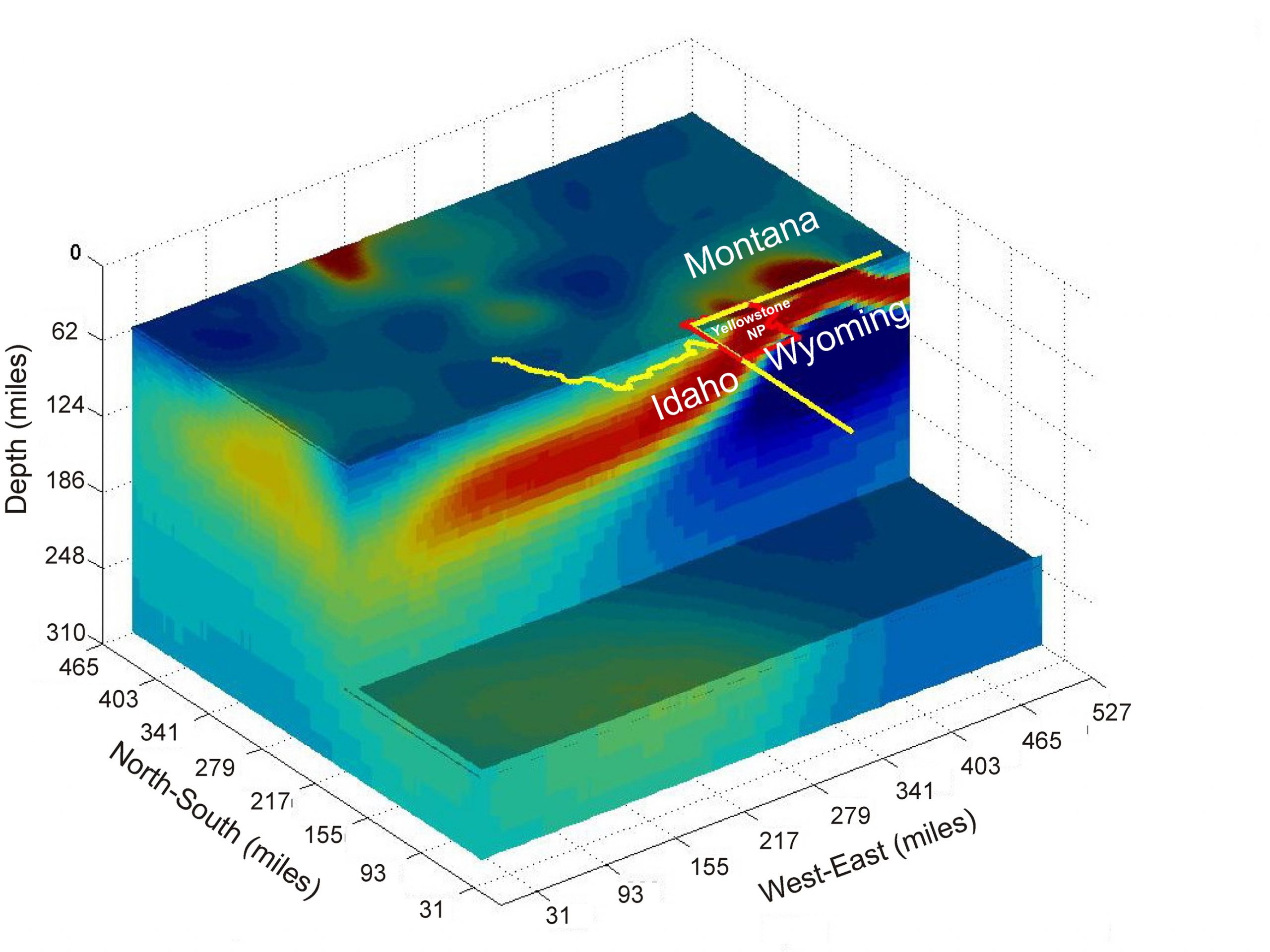 April 11, 2011 — University of Utah geophysicists made the first large-scale picture of the electrical conductivity of the gigantic underground plume of hot and partly molten rock that feeds the Yellowstone supervolcano. The image suggests the plume is even bigger than it appears in earlier images made with earthquake waves.

“It’s like comparing ultrasound and MRI in the human body; they are different imaging technologies,” says geophysics Professor Michael Zhdanov, principal author of the new study and an expert on measuring magnetic and electrical fields on Earth’s surface to find oil, gas, minerals and geologic structures underground.

“It’s a totally new and different way of imaging and looking at the volcanic roots of Yellowstone,” says study co-author Robert B. Smith, professor emeritus and research professor of geophysics and a coordinating scientist of the Yellowstone Volcano Observatory.

The new University of Utah study has been accepted for publication in Geophysical Research Letters, which plans to publish it within the next few weeks.

In a December 2009 study, Smith used seismic waves from earthquakes to make the most detailed seismic images yet of the “hotspot” plumbing that feeds the Yellowstone volcano. Seismic waves move faster through cold rock and slower through hot rock. Measurements of seismic-wave speeds were used to make a three-dimensional picture, quite like X-rays are combined to make a medical CT scan.

The 2009 images showed the plume of hot and molten rock dips downward from Yellowstone at an angle of 60 degrees and extends 150 miles west-northwest to a point at least 410 miles under the Montana-Idaho border – as far as seismic imaging could “see.”

In the new study, images of the Yellowstone plume’s electrical conductivity – generated by molten silicate rocks and hot briny water mixed in partly molten rock – shows the conductive part of the plume dipping more gently, at an angle of perhaps 40 degrees to the west, and extending perhaps 400 miles from east to west. The geoelectric image can “see” only 200 miles deep.

Smith says the geoelectric and seismic images of the Yellowstone plume look somewhat different because “we are imaging slightly different things.” Seismic images highlight materials such as molten or partly molten rock that slow seismic waves, while the geoelectric image is sensitive to briny fluids that conduct electricity.

“It [the plume] is very conductive compared with the rock around it,” Zhdanov says. “It’s close to seawater in conductivity.”

The lesser tilt of the geoelectric plume image raises the possibility that the seismically imaged plume, shaped somewhat like a tilted tornado, may be enveloped by a broader, underground sheath of partly molten rock and liquids, Zhdanov and Smith say.

“It’s a bigger size” in the geoelectric picture, says Smith. “We can infer there are more fluids” than shown by seismic images.

Despite differences, he says, “this body that conducts electricity is in about the same location with similar geometry as the seismically imaged Yellowstone plume.”

Zhdanov says that last year, other researchers presented preliminary findings at a meeting comparing electrical and seismic features under the Yellowstone area, but only to shallow depths and over a smaller area.

The study was conducted by Zhdanov, Smith, two members of Zhdanov’s lab – research geophysicist Alexander Gribenko and geophysics Ph.D. student Marie Green – and computer scientist Martin Cuma of the University of Utah’s Center for High Performance Computing. Funding came from the National Science Foundation (NSF) and the Consortium for Electromagnetic Modeling and Inversion, which Zhdanov heads.

The Yellowstone Hotspot at a Glance

The new study says nothing about the chances of another cataclysmic caldera (giant crater) eruption at Yellowstone, which has produced three such catastrophes in the past 2 million years.

Almost 17 million years ago, the plume of hot and partly molten rock known as the Yellowstone hotspot first erupted near what is now the Oregon-Idaho-Nevada border. As North America drifted slowly southwest over the hotspot, there were more than 140 gargantuan caldera eruptions – the largest kind of eruption known on Earth – along a northeast-trending path that is now Idaho’s Snake River Plain.

The hotspot finally reached Yellowstone about 2 million years ago, yielding three huge caldera eruptions about 2 million, 1.3 million and 642,000 years ago. Two of the eruptions blanketed half of North America with volcanic ash, producing 2,500 times and 1,000 times more ash, respectively, than the 1980 eruption of Mount St. Helens in Washington state. Smaller eruptions occurred at Yellowstone in between the big blasts and as recently as 70,000 years ago.

Seismic and ground-deformation studies previously showed the top of the rising volcanic plume flattens out like a 300-mile-wide pancake 50 miles beneath Yellowstone. There, giant blobs of hot and partly molten rock break off the top of the plume and slowly rise to feed the magma chamber – a spongy, banana-shaped body of molten and partly molten rock located about 4 miles to 10 miles beneath the ground at Yellowstone.

Zhdanov and colleagues used data collected by EarthScope, an NSF-funded effort to collect seismic, magnetotelluric and geodetic (ground deformation) data to study the structure and evolution of North America. Using the data to image the Yellowstone plume was a computing challenge because so much data was involved.

Inversion is a formal mathematical method used to “extract information about the deep geological structures of the Earth from the magnetic and electrical fields recorded on the ground surface,” Zhdanov says. Inversion also is used to convert measurements of seismic waves at the surface into underground images.

Magnetotelluric measurements record very low frequencies of electromagnetic radiation – about 0.0001 to 0.0664 Hertz – far below the frequencies of radio or TV signals or even electric power lines. This low-frequency, long-wavelength electromagnetic field penetrates a couple hundred miles into the Earth. By comparison, TV and radio waves penetrate only a fraction of an inch.

The EarthScope data were collected by 115 stations in Wyoming, Montana and Idaho – the three states straddled by Yellowstone National Park. The stations, which include electric and magnetic field sensors, are operated by Oregon State University for the Incorporated Research Institutions for Seismology, a consortium of universities.

Zhdanov says it took about 18 hours of supercomputer time to do all the calculations needed to produce the geoelectric plume picture. The supercomputer was the Ember cluster at the University of Utah’s Center for High Performance Computing, says Cuma, the computer scientist.

Ember has 260 nodes, each with 12 CPU (central processing unit) cores, compared with two to four cores commonly found on personal computer, Cuma says. Of the 260 nodes, 64 were used for the Yellowstone study, which he adds is “roughly equivalent to 200 common PCs.”