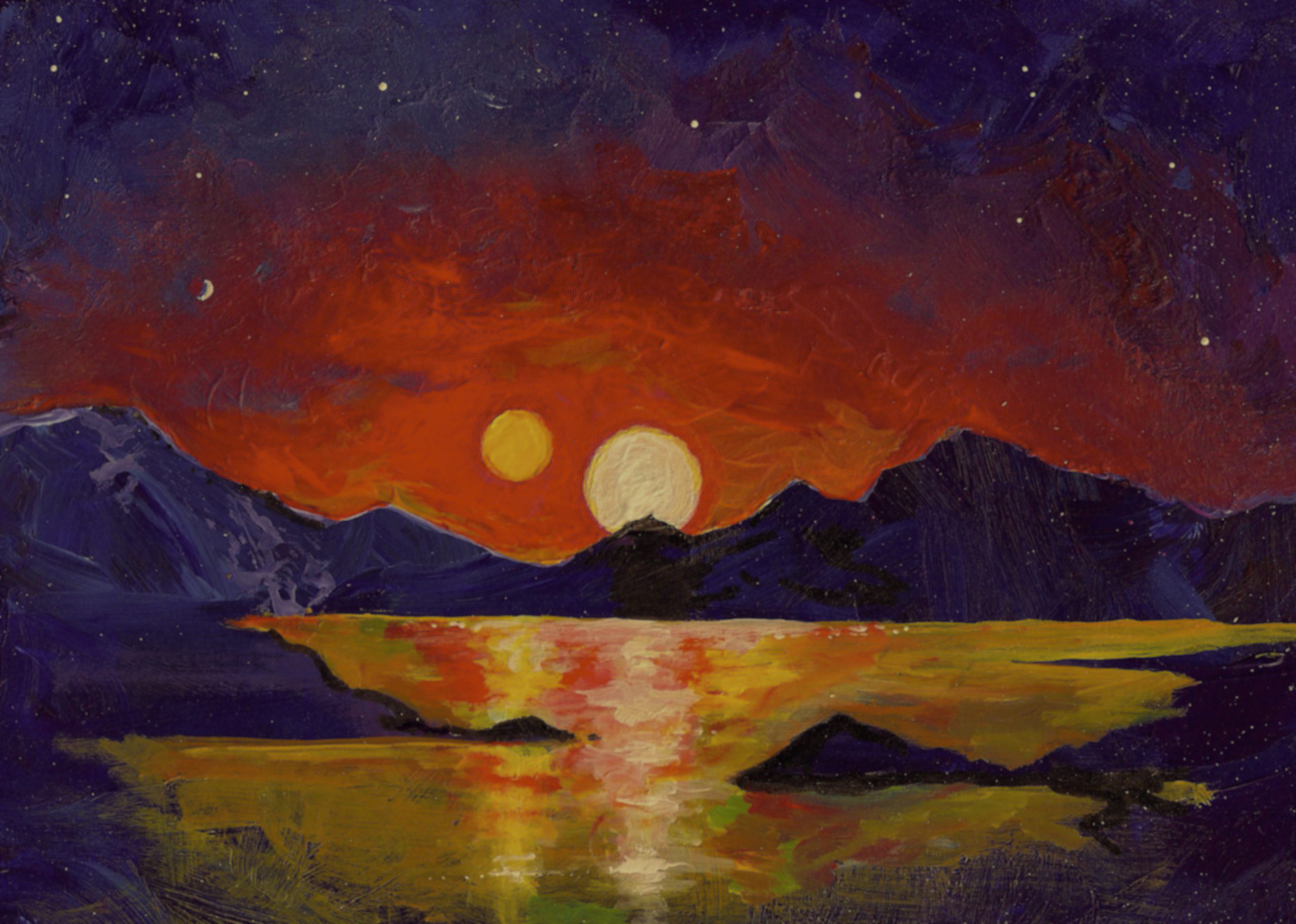 March 30, 2015 – Luke Skywalker’s home in “Star Wars” is the desert planet Tatooine, with twin sunsets because it orbits two stars. So far, only uninhabitable gas-giant planets have been identified circling such binary stars, and many researchers believe rocky planets cannot form there. Now, mathematical simulations show that Earthlike, solid planets such as Tatooine likely exist and may be widespread.

“Tatooine sunsets may be common after all,” concludes the study by astrophysicists Ben Bromley of the University of Utah and Scott Kenyon of the Smithsonian Astrophysical Observatory.

“Our main result is that outside a small region near a binary star, [either rocky or gas-giant] planet formation can proceed in much the same way as around a single star,” they write. “In our scenario, planets are as prevalent around binaries as around single stars.”

The study has been submitted to Astrophysical Journal for review, but as is the custom in the field, the authors have posted the unreviewed paper on the scientific preprint website ArXiv (pronounced archive).

With “Star Wars: Episode VII – The Force Awakens” due to hit movie screens Dec. 18, fans of the epic series may be cheered at the possible reality of planets like Tatooine, home planet of both Luke and Anakin Skywalker, meeting place of Obi Wan Kenobi and Han Solo and the domain ruled (until his death in battle) by crime lord Jabba the Hutt. Luke stares at Tatooine’s double suns setting in a classic film moment.

The title of the new study is “Planet formation around binary stars: Tatooine made easy,” but the paper looks anything but easy: it is filled with mathematical formulas describing how binary stars can be orbited by planetesimals – asteroid-sized rocks that clump together to form planets.

“We took our sweet numerical time to show that the ride around a pair of stars can be just as smooth as around one,” when it comes to the early steps of planet formation, Bromley says. “The ‘made easy’ part is really saying the same recipe that works around the sun will work around Tatooine’s host stars.”

The study was funded by NASA’s Outer Planets Program and was a spinoff of Bromley’s and Kenyon’s research into how dwarf planet Pluto and its major moon, Charon, act like a binary system. Both are orbited by four other moons.

From a swirling disk of gas and dust surrounding a young star, “planets form like dust bunnies under your bed, glomming together to make larger and larger objects,” says Kenyon, whose observatory is part of the Harvard-Smithsonian Center for Astrophysics. “When planets form around a binary, the binary scrambles up the dust bunnies unless they are on just the right orbit.”

Scientists call that a “most circular orbit,” which in reality is a not-quite-circular, oval-shaped orbit in which the entire oval has numerous little waves in it, Bromley says.

“It’s an oval with ripples,” which are caused by the cyclic tugging of the two central stars, he adds.

“For over a decade, astrophysicists believed that planets like Earth could not form around most binary stars, at least not close enough to support life,” he says. “The problem is that planetesimals need to merge gently together to grow. Around a single star, planetesimals tend to follow circular paths – concentric rings that do not cross. If planetesimals do approach each other, they can merge together gently.”

But if planetesimals orbit a pair of stars, “their paths get mixed up by the to-and-fro pull of the binary stars,” Bromley says. “Their orbits can get so tangled that they cross each other’s paths at high speeds, dooming them to destructive collisions, not growth.”

Previous research started with circular orbits when pondering planet formation around binary stars, Bromley says, while the new study shows that “planets, when they are small, will naturally seek these oval orbits and never start off on circular ones. … If the planetesimals are in an oval-shaped orbit instead of a circle, their orbits can be nested and they won’t bash into each other. They can find orbits where planets can form.”

In their study, Bromley and Kenyon showed mathematically and by simple computer simulations that rocky, Earth-sized planets can form around binary stars if they have the oval “most circular” orbit. They didn’t conduct their simulations to the point of planet formation, but showed that planetesimals could survive without collisions for tens of thousands of years in concentric, oval-shaped orbits around binary stars.

“We are saying you can set the stage to make these things,” Bromley says. “It is just as easy to make an Earthlike planet around a binary star as it is around a single star like our sun. So we think that Tatooines may be common in the universe.”

NASA’s Kepler space telescope has discovered more than 1,000 planets orbiting other stars, including some rocky planets in the so-called habitable zone neither too near and hot, nor too far and cold from the star they each orbit.

So far, Kepler has found seven planets orbiting within or near the habitable zone around binary stars, but all of them are giant gaseous planets, Bromley says.

“The planets that Kepler has discovered so far around binary stars are larger, Neptune- or Jupiter-sized gas giants,” he says. “None of those found so far are small and rocky like our Earth – or like Tatooine in ‘Star Wars.’”

Bromley believes Kepler hasn’t yet spotted Earthlike planets around binary stars because they are small compared with gas giants, “so it’s a hard measurement.”

While Kepler has found other gas giants farther from binary stars, there has been debate about how the seven in or near the habitable zone got where they are.

The new study shows it is possible they formed in place from gas and dust – something “everyone else says is impossible,” Bromley says. He also doubts it because there doesn’t appear to have been enough gas and dust for gas giants Kepler has spotted near binaries to have formed in place. The study also showed that the gas and dust could have moved in from elsewhere so the gas giants could form where they now are seen.

The prevailing theories contend the gas giants discovered by the Kepler spacecraft must have formed farther out in a cooler, calmer part of space and then migrated closer to the binary stars, either by spiraling inward though a disk of gas surrounding the binary pair, or by being hurled in by the gravity of another more distant gas-giant planet.

But “an Earthlike Tatooine would have no problem forming right where it needs to be to host life,” Bromley says.