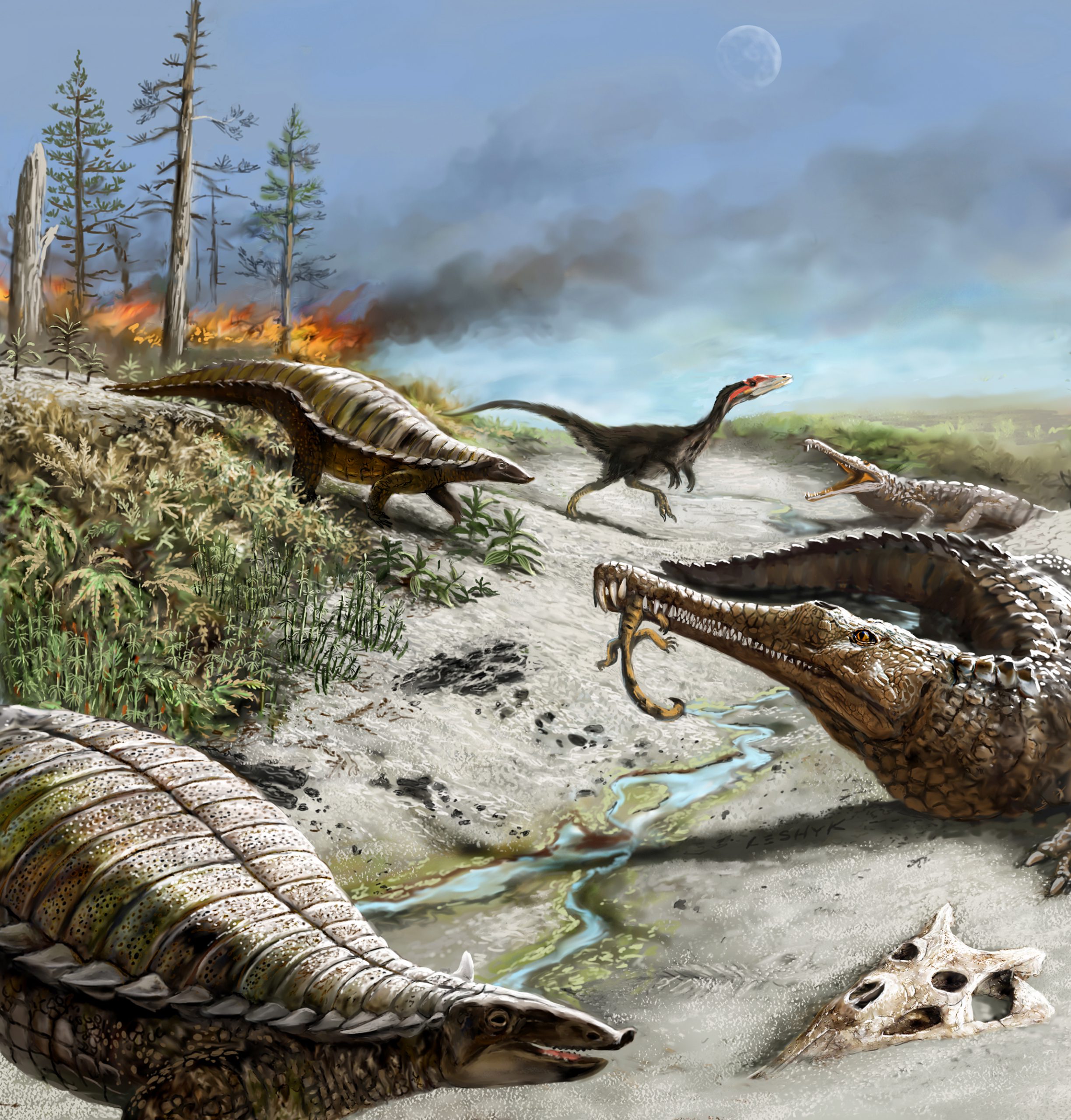 June ­15, 2015 ­– For more than 30 million years after dinosaurs first appeared, they remained inexplicably rare near the equator, where only a few small-bodied meat-eating dinosaurs eked out a living. The age-long absence of big plant-eaters at low latitudes is one of the great, unanswered questions about the rise of the dinosaurs.

And now the mystery has a solution, according to an international team of scientists who pieced together a remarkably detailed picture of the climate and ecology more than 200 million years ago at Ghost Ranch in northern New Mexico, a site rich with fossils from the Late Triassic Period.

The new findings show that the tropical climate swung wildly with extremes of drought and intense heat. Wildfires swept the landscape during arid regimes and continually reshaped the vegetation available for plant-eating animals.

“Our data suggest it was not a fun place,” says study co-author Randall Irmis, curator of paleontology at the Natural History Museum of Utah and assistant professor at the University of Utah. “It was a time of climate extremes that went back and forth unpredictably and large, warm-blooded dinosaurian herbivores weren’t able to exist nearer to the equator – there was not enough dependable plant food.”

The study, led by geochemist Jessica Whiteside, lecturer at the University of Southampton, is the first to provide a detailed look at the climate and ecology during the emergence of the dinosaurs. The results are important, also, for understanding human-caused climate change. Atmospheric carbon dioxide levels during the Late Triassic were four to six times current levels. “If we continue along our present course, similar conditions in a high-CO2 world may develop, and suppress low-latitude ecosystems,” Irmis says.

The other authors are Sofie Lindström, Ian Glasspool, Morgan Schaller, Maria Dunlavey, Sterling Nesbitt, Nathan Smith and Alan Turner. They reported the findings in the Proceedings of the National Academy of Sciences.

Reconstructing the deep past

The earliest known dinosaur fossils, found in Argentina, date from around 230 million years ago. Within 15 million years, multitudes of species with different diets and body sizes had evolved and were abundant beyond the tropical latitudes. In the tropics, the only dinosaurs present were small carnivores. This pattern persisted for 30 million years after the first dinosaurs appeared.

In the new study, the authors focused on Chinle Formation rocks, which were deposited by rivers and streams between 205 and 215 million years ago at Ghost Ranch (better known to many outside of paleontology as the place where artist Georgia O’Keeffe lived and painted for much of her career). The multi-colored rocks of the Chinle Formation are a common sight on the Colorado Plateau at places such as the Painted Desert at Petrified Forest National Park in Arizona. During the Late Triassic, North America and other land masses of the world were bound together in the supercontinent Pangea. The Ghost Ranch site stood close to the equator at roughly the same latitude as present-day southern India.

The researchers reconstructed the deep past by analyzing several kinds of data: fossils, charcoal left by ancient wildfires, and stable isotopes from organic matter and carbonate nodules that formed in ancient soils. “Each dataset complements the others, and they all point towards similar conditions,” Whiteside says. “I think this is one of the major strengths of our study.”

Fossilized bones, pollen grains and fern spores revealed the types of animals and plants living at different times, marked by layers of sediment. Dinosaurs remained rare among the fossils, accounting for less than 15 percent of vertebrate animal remains. They were outnumbered in diversity, abundance and body size by the reptiles known as Pseudosuchian archosaurs, the lineage that gave rise to crocodiles and alligators.

The sparse dinosaurs consisted mostly of small, carnivorous theropods. Big, long-necked dinosaurs, or sauropodomorphs – already the dominant plant-eaters at higher latitudes – did not exist at the study site or any other low-latitude site in Triassic Pangaea, as far as the fossil record shows.

Abrupt changes in climate left a record in the shifting abundance of different types of pollen and fern spores between sediment layers. Fossilized organic matter from decaying plants provided another window on climate shifts. Changes in the ratio of stable isotopes of carbon in the organic matter bookmarked times when plant productivity declined during extended droughts.

Wildfire burn temperatures varied drastically, the researchers found, consistent with a fluctuating environment in which the amount of combustible plant matter rose and fell over time. The researchers estimated the intensity of wildfires using bits of charcoal recovered in the sediment layers. The amount of light reflected from the fossil charcoal under a light microscope relates directly to the burn temperature of the wood. The overall picture, the authors say, is that of a climate punctuated by extreme shifts in precipitation in which plant die-offs fueled hotter fires, which in turn killed more plants, damaged soils and increased erosion.

Atmospheric carbon dioxide levels, calculated from stable isotope analyses of soil carbonate and preserved organic matter, rose from about 1,200 parts per million at the base of the section, to about 2,400 parts per million near the top. At these high CO2 concentrations, climate models predict more frequent and more extreme weather fluctuations consistent with the fossil and charcoal evidence.

Continuing shifts between extremes of dry and wet likely prevented the establishment of dinosaur-dominated communities found in the fossil record at higher-latitudes across South America, Europe and southern Africa, where aridity and temperatures were less extreme and humidity was consistently higher. Resource-limited conditions could not support a diverse community of fast-growing, warm-blooded, large dinosaurs, which require a productive and stable environment to thrive.

“The conditions would have been something similar to the arid western United States today, although there would have been trees and smaller plants near streams and rivers and forests during humid times,” says Whiteside. “The fluctuating and harsh climate with widespread wild fires meant that only small two-legged carnivorous dinosaurs, such as Coelophysis, could survive.”

Fieldwork was conducted with the permission and support of the Ghost Ranch Conference Center.