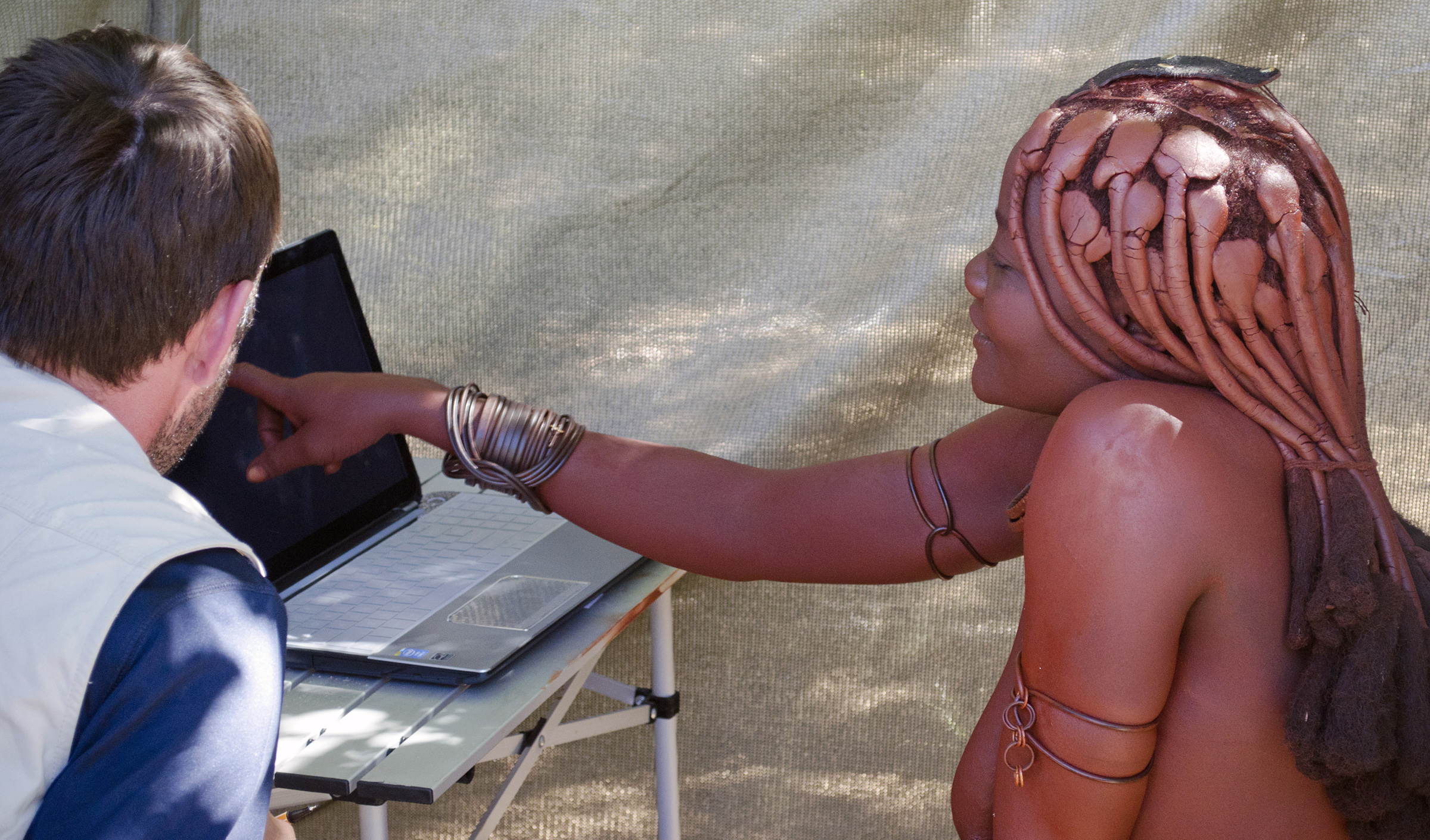 Nov. 13, 2014 – A University of Utah study of two African tribes found evidence that men evolved better navigation ability than women because men with better spatial skills – the ability to mentally manipulate objects – can roam farther and have children with more mates.

By testing and interviewing dozens of members of the Twe and Tjimba tribes in northwest Namibia, the anthropologists showed that men who did better on a spatial task not only traveled farther than other men but also had children with more women, according to the study published this week in the journal Evolution and Human Behavior.

“It’s the first time anybody has tried to draw a line between spatial ability, navigation, range size and reproductive success. Most of this chain has been assumed in the scientific literature,” says Layne Vashro, the study’s first author and a postdoctoral researcher in anthropology.

Anthropology professor Elizabeth Cashdan, the study’s senior author, says, “Some of the links have been demonstrated, but this study looks at the whole chain and that’s what is novel about it.”

Funding for the study came in part from a dissertation improvement grant to Vashro from the National Science Foundation.

Cashdan says spatial skills include “being able to visualize spatial relationships and manipulate that image in your mind.” Vashro says an example is to “visualize how you fit a bunch of things into the back of a truck, and how you could rotate them most efficiently to fit.”

Cashdan notes that relative to other cognitive differences between the sexes, such as cultural differences in math skills, the difference in spatial skills is large, and it is found across cultures and in some other species. “That’s why we think it may have evolutionary roots,” she says.

“The argument in the literature is that you need good spatial ability to navigate successfully, and you need to navigate effectively to travel long distances in unfamiliar environments,” Cashdan says. “That is the hypothesized link.”

The new study connected links in that chain.

“These findings offer strong support for the relationship between sex differences in spatial ability and ranging behavior, and identify male mating competition as a possible selective pressure shaping this pattern,” the researchers conclude in their paper.

The study involved members of the Twe (pronounced tway) and Tjimba (pronounced chim-bah) tribes, which live in a mountainous, semiarid desert area. They have some goats and cows, and they collect berries, tubers and honey, and tend gardens with maize and some melons and pumpkin, Vashro says.

The Twe and Tjimba were good subjects for the study because they travel over distances of 120 miles during a year, “navigating on foot in a wide-open natural environment like many of our ancestors,” Vashro says.

The tribes “have a comparatively open sexual culture,” Vashro says. Cashdan adds, “They have a lot of affairs with people they’re not married to, and this is accepted in the culture.” Many men have children by women other than their wives.

That also made the tribes good for the study, because “in a culture where you don’t have mates outside of marriage, we’re not going to expect as tight a relationship between range size and reproductive success,” Cashdan says.

During visits to Namibia’s Kunene region during 2009-2011, Vashro had Twe and Tjimba participants perform different tasks. He looked for male-female differences and correlations among those differences:

– To test the ability to rotate objects mentally, a computer screen displayed a series of hands palm up or palm down and oriented in different directions. After a trial period, 68 men and 52 women were shown a series of hands for up to 7.5 seconds per image and were asked to identify whether the pictured hand was a left hand or right hand. After excluding participants who didn’t understand the task, the Utah researchers found males did better.

– Another test of spatial perception involved a picture of a clear plastic cup with a horizontal water line in the middle. It was shown to 67 men and 55 women. Then they were shown a single page with four images of the cup tipped and the water line at varying angles. They were asked to identify the correct image, which showed the water line in the tipped cup parallel to the ground. This task also has been shown to be easier for men and also may be related to certain navigation skills. In the new study, the men also were significantly better at it than the women.

– In another test, 37 men and 36 women were asked to point to nine different locations in the Kunene region, ranging from about 8 to 80 miles away. Vashro used a GPS compass to measure their accuracy. Men scored significantly better than women.

– The researchers also measured the range size of Twe and Tjimba people by interviewing them and asking how many places they visited during the past year and the distance they covered to get to each location.

“It looks like men who travel more in the past year also have children from more women – what you would expect if mating was the payoff for travel,” Vashro says.

“Why men should be better at mentally rotating objects is a weird thing,” Cashdan says. “Some people think it is culturally constructed, but that doesn’t explain why the pattern is shared so broadly across human societies and even in some other species. The question is why should men get better benefits from spatial ability than women? One hypothesis, which our data support, is that males, more than females, benefit reproductively from getting more mates, and ranging farther is one way they do this.”