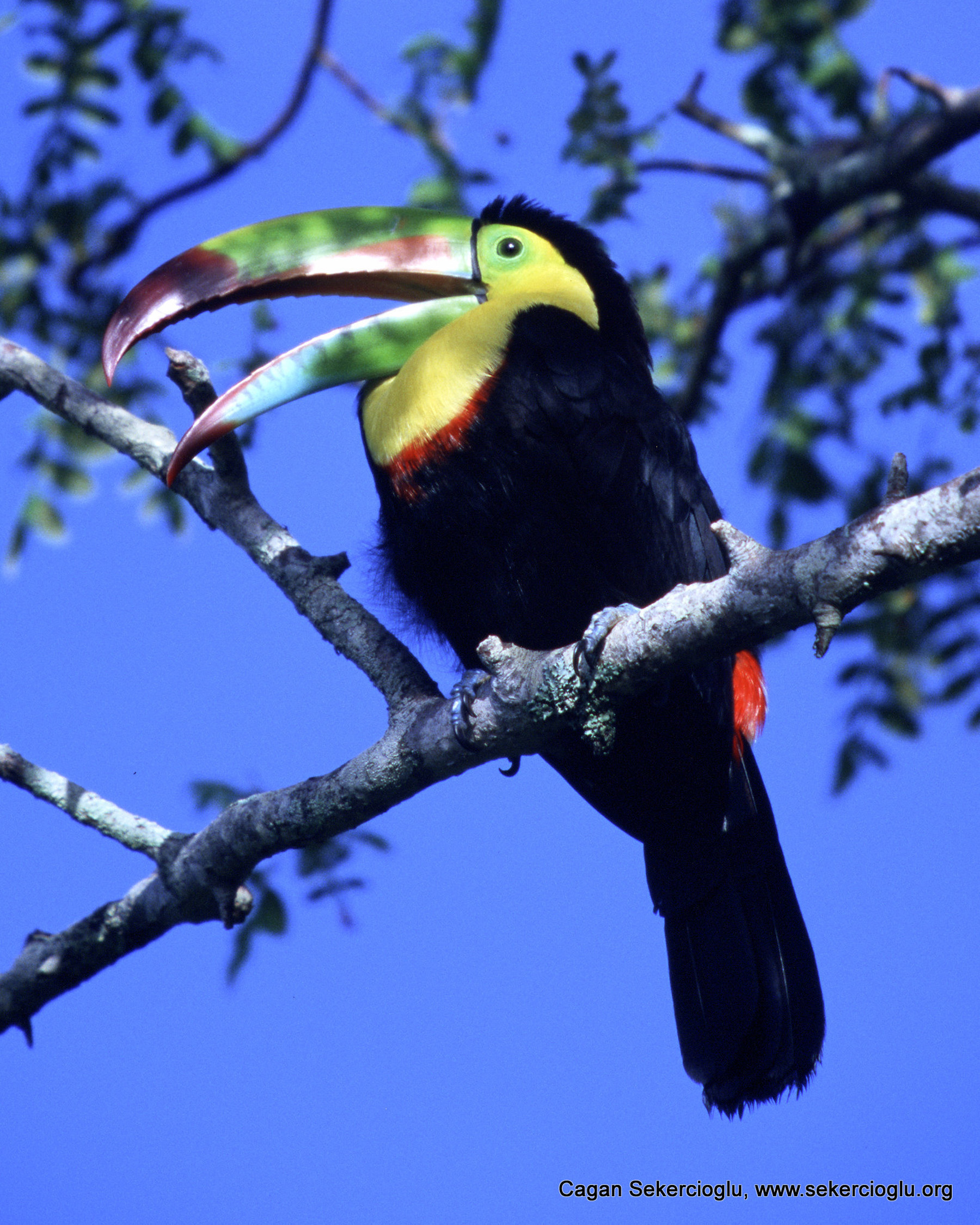 Feb. 16, 2012 – Climate change spells trouble for many tropical birds – especially those living in mountains, coastal forests and relatively small areas – and the damage will be compounded by other threats like habitat loss, disease and competition among species.

That is among the conclusions of a review of nearly 200 scientific studies relevant to the topic. The review was scheduled for online publication this week in the journal Biological Conservation by Çağan Şekercioğlu (pronounced Cha-awn Shay-care-gee-oh-loo), an assistant professor of biology at the University of Utah.

He points out that already, “12.5 percent of the world’s 10,000 bird species are threatened with extinction” – listed as vulnerable, endangered or critically endangered by the International Union for Conservation of Nature (www.redlist.org).

Şekercioğlu’s research indicates about 100 to 2,500 land bird species may go extinct due to climate change, depending on the severity of global warming and habitat loss due to development, and on the ability of birds to find new homes as rising temperatures push them poleward or to higher elevations. The most likely number of land bird extinctions, without additional conservation efforts, is 600 to 900 by the year 2100, Şekercioğlu says.

“Birds are perfect canaries in the coal mine – it’s hard to avoid that metaphor – for showing the effects of global change on the world’s ecosystems and the people who depend on those ecosystems,” he adds.

Şekercioğlu reviewed the scientific literature relevant to climate change and tropical birds with Richard Primack, a biologist at Boston University, and Janice Wormworth, a freelance science writer and ecological consultant in Australia.

The review was funded by the Christensen Fund – which finances community-based conservation projects – the University of Utah and National Science Foundation.

Putting the Heat on Tropical Birds

“The balance of evidence points to increases in the numbers of intense tropical hurricanes (though hurricane frequency could decrease overall),” Şekercioğlu and colleagues write. “This would predominantly affect tropical bird communities, especially species living in coastal and island habitats.”

Şekercioğlu says it is difficult to predict how habitat loss, emerging diseases, invasive species, hunting and pollution will combine with climate change to threaten tropical birds, although “in some cases habitat loss [from agriculture and development] can increase bird extinctions caused by climate change by nearly 50 percent.”

In addition, “compared to temperate species that often experience a wide range of temperature on a yearly basis, tropical species, especially those limited to tropical forests with stable climates, are less likely to keep up with rapid climate change.”

Şekercioğlu acknowledges that “not all effects of climate change are negative, and changes in temperature and precipitation regimes will benefit some species. … Nevertheless, climate change will not benefit many species.”

A 2008 study by Şekercioğlu and late climatologist Stephen Schneider calculated 60 scenarios of how tropical land bird extinction rates will be affected by various possible combinations of three variables: climate change, habitat loss and how easily birds can shift their range, meaning move to new habitat. Citing those estimates, the new review paper says that “depending on the amount of habitat loss, each degree of surface warming can lead to approximately 100 to 500 additional bird extinctions.”

The Intergovernmental Panel on Climate Change has predicted 1.1 to 6.4 degrees Celsius (2 to 11.5 degrees Fahrenheit) of global warming of the Earth’s surface by the year 2100, which Şekercioğlu’s study converted into a best case of about 100 land bird extinctions and a worst case of 2,500.

He says the most likely case now is considered to be 3.5 C (6.3 F) warming by 2100, resulting in about 600 to 900 land bird species going extinct. These estimates are conservative because they exclude water birds, which are 14 percent of all bird species.

Because they don’t travel far, “sedentary” birds “are five times more likely to go extinct in the 21st century than are long-distance migratory birds,” says Şekercioğlu.

To better understand and reduce the impact of climate change on tropical birds, Şekercioğlu urges more research, identification and monitoring of species at greatest risk, restoration of degraded lands, relocation of certain species, and new and expanded protected areas and corridors based on anticipated changes in a species’ range.

“Nevertheless,” Şekercioğlu and colleagues write, “such efforts will be temporary fixes if we fail to achieve important societal change to reduce consumption, to control the emissions of greenhouse gases and to stop climate change.”

“Otherwise,” they add, “we face the prospect of an out-of-control climate that will not only lead to enormous human suffering, but will also trigger the extinction of countless organisms, among which tropical birds will be but a fraction of the total.”

The University of Utah offers a satellite uplink service for live interviews or video feeds about this story. For more information, please visit: http://unews.utah.edu/broadcast-services