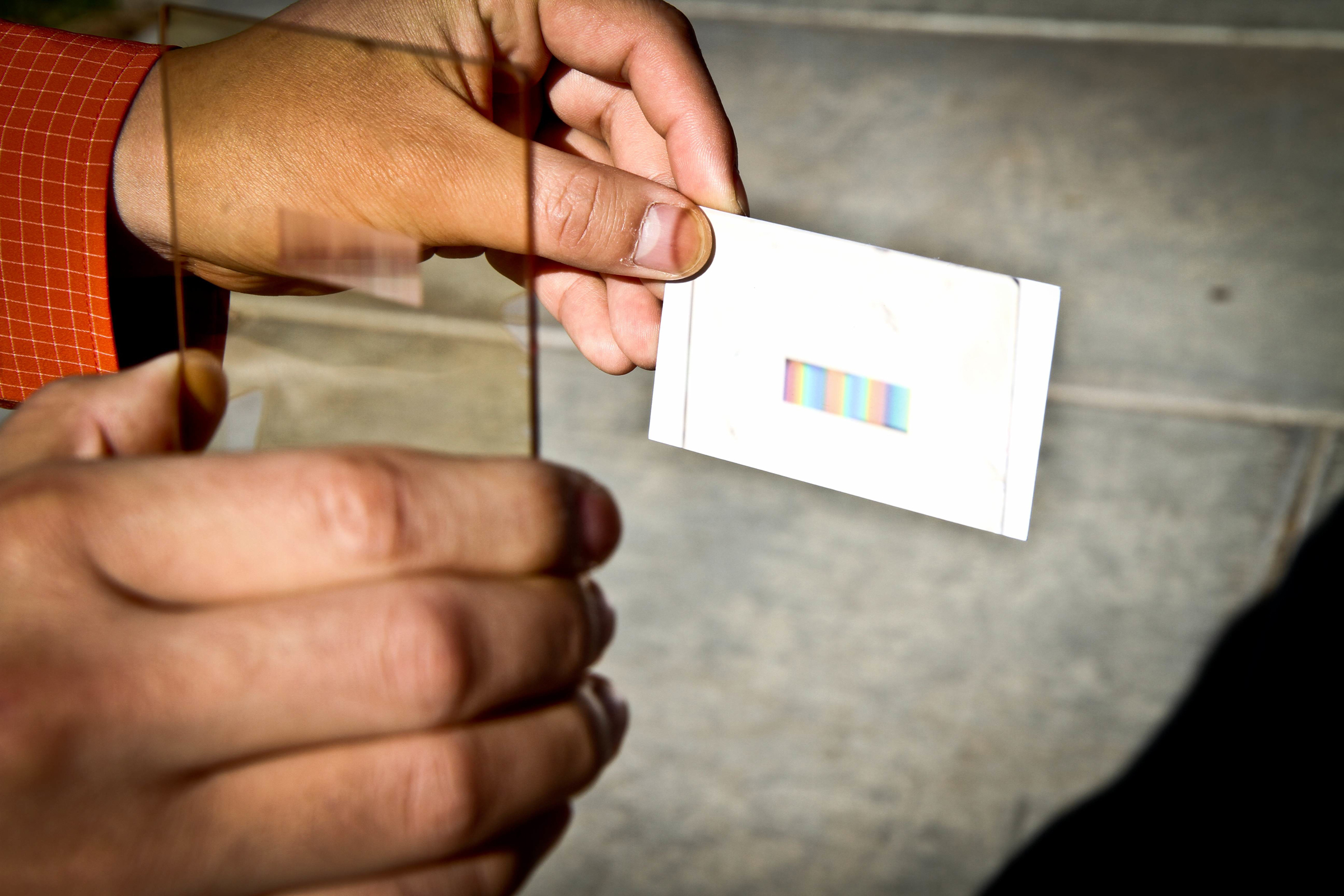 June 10, 2014 – University of Utah electrical engineers have designed a thin layer made of a transparent plastic or glass that sorts and concentrates sunlight to boost the overall efficiency of solar cells by up to 50 percent. This layer, called a polychromat, can be integrated into the cover glass of a solar panel. It could also be used to boost power efficiency in a cellphone or improve low light conditions for a camera.

“Currently, high-efficiency solar cells are very expensive because they have to be carefully manufactured in a complex environment and are only cost-effective for space or defense applications like the Mars Rover,” says Rajesh Menon, a Utah Science Technology and Research (USTAR) assistant professor of electrical and computer engineering at the U. “We have designed a very cheap optical element that can be incorporated into the cover glass of a solar panel that will separate sunlight into various colors.”

Solar cells absorb light from the sun and convert it into electricity. Despite its tremendous potential as a limitless resource of energy, solar power is currently a small fraction of the global energy supply, due to its high cost compared with conventional power sources. In addition, challenges in materials have further limited solar power’s wide reach.

Solar cell performance is directly linked to the efficiency of converting sunlight into electricity. Solar cells operate on the concept that one absorbed bundle of light from the sun, called a photon, generates electrical charge carriers in a layer of material within the solar cell that then becomes electricity.

However, sunlight is made up of different wavelengths of light, ranging from ultraviolet to visible to infrared. Light at different wavelengths is made of photons at different energies. Conventional solar cells only absorb a narrow range of wavelengths very efficiently. The energy at other wavelengths is not absorbed at all or is converted into waste heat rather than electricity. As a result, a solar cell can only convert so many photons into electricity, up to a theoretical limit of about 33.5 percent efficiency (called the Shockley-Queissner limit).

The team placed the polychromat on top of a photovoltaic device, which is a device that generates a voltage when exposed to energy, especially light. The photovoltaic device is made of two absorber layers: gallium indium phosphide to absorb visible light, and gallium arsenide to absorb infrared light. When the University of Utah polychromat was added, the power efficiency increased by 16 percent.

“These colors can be absorbed by appropriate solar cells to increase the efficiency of the overall process without increasing the cost,” says Menon.

The researchers also developed computer simulations of a polychromat placed on a solar cell with eight different absorber layers to show a theoretical efficiency greater than 50 percent.

“With our approach, you can almost arbitrarily select the bands of light—within the laws of physics—to give more flexibility in the design of the panel,” says Menon. “With a normal lens it’s very difficult to actually separate the colors, and with a prism it’s difficult to get the separated light exactly where you want it.”

Recently, the University of Utah became the first university in the country to sponsor a community solar program that offers community members the opportunity to purchase discounted rooftop solar panels and installation for their homes. The polychromats from this study are not being used in the community program.

Menon says the next step to using these polychromats in commercial solar cells is working with solar cell manufacturers. He says this could lead to high-efficiency solar cells in another 5 or 10 years. In the meantime, Menon and his team will test this new technology at the characterization facility at the National Renewable Energy Laboratory.

“The solar cells in the Mars Rover are very efficient but can’t be expected to be widely used on rooftops due to their high cost,” says Menon. “We’ve figured out the optics, but incorporation into commercial photovoltaic devices is difficult today because few manufacturers can handle the multiple materials needed, so that’s the next big challenge.”

Menon says the polychromat concept could also be used to generate a brighter, more power-efficient LCD display in a cellphone, or to boost colors in a camera under low light conditions. These applications are being explored through Menon’s startup company, PointSpectrum Corporation.

This new study by Menon and Wang appears online today in the journal Progress in Photovoltaics: Research and Applications. The study was funded by a Utah Technology Commercialization grant and the Department of Energy.

The study co-authors are Dan Friedman at the National Renewable Energy Laboratory, who provided the solar cells, and Jose Dominguez-Caballero at the Massachusetts Institute of Technology, who helped develop the algorithm used for simulations.