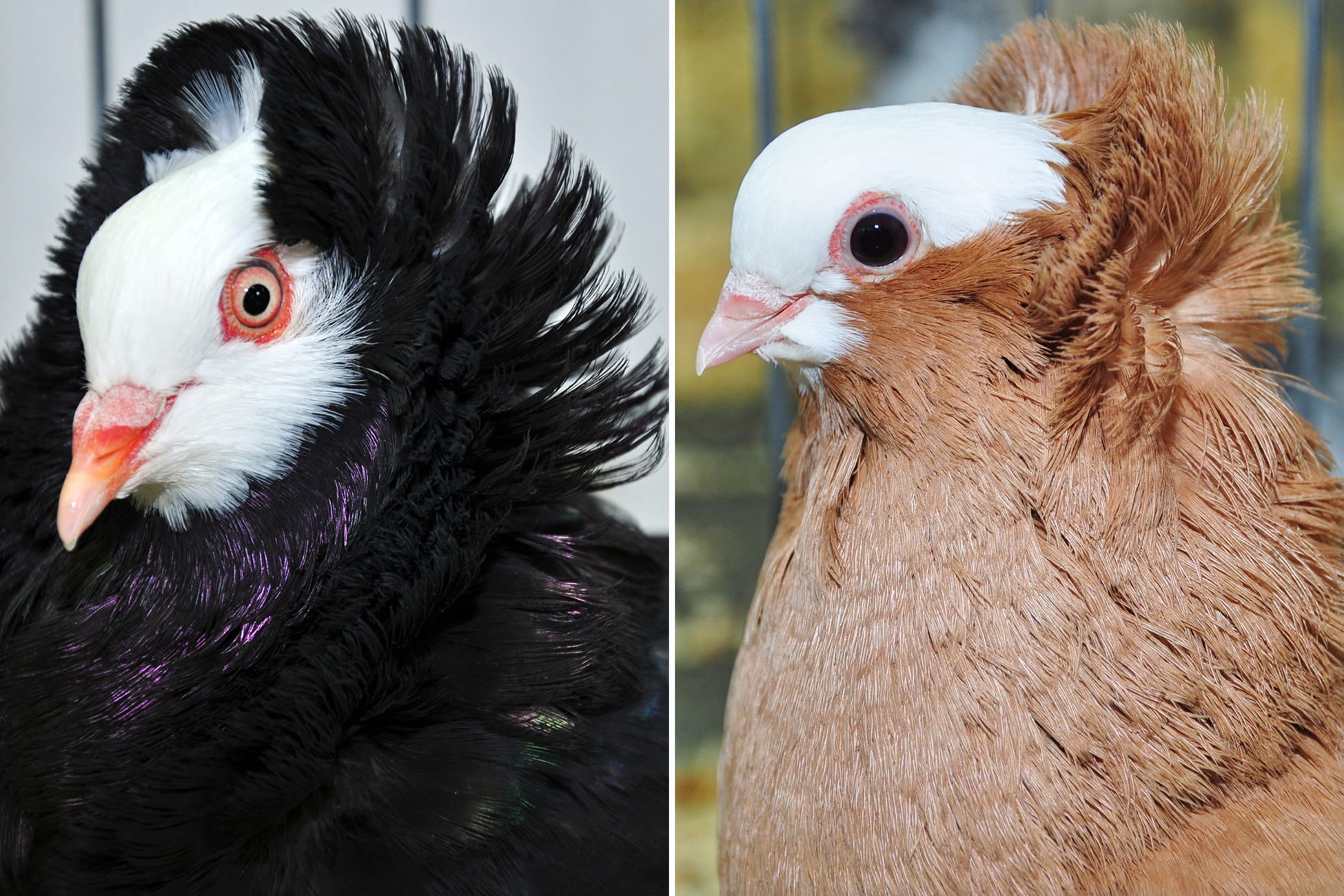 Jan. 19, 2012 – Pigeons display spectacular variations in their feathers, feet, beaks and other physical traits, but a new University of Utah study shows that visible traits don’t always coincide with genetics: A bird from one breed may have huge foot feathers, while a closely related breed does not; yet two unrelated pigeon breeds both may have large foot feathers.

“Most people think of pigeons as rats of the sky, but in fact they’re really incredibly diverse,” says Michael Shapiro, an assistant professor of biology and senior author of the study published online Jan. 19 in the journal Current Biology.

More than 350 breeds of pigeons differ in color, color pattern, body size, beak size and shape, structure of the skeleton, posture, vocalizations, feather placement and flight behavior. With help from pigeon breeders worldwide, the researchers studied the genetic relationships and visible traits of 361 pigeons from 70 domestic breeds and two free-living populations, one from Salt Lake City and the other on Scotland’s Isle of Skye.

In some cases, birds of a feather don’t stick together – genetically: The old German owl pigeon and English trumpeter both have head feathers known as a head crest, yet the two pigeon breeds aren’t closely related. Another case: English trumpeters have feathers on their feet instead of scales. So do English pouters. Yet they are not closely related.

In other findings from the study:

“Pigeons are a remarkable example of how selection and heredity work,” Shapiro says. “These breeds are all members of the same species, but look really different. This happened because pigeon fanciers over the ages favored particular traits. This happened in dogs, too. It also happens to animals and other living things in the wild, except the agents of selection and change are environmental factors rather than human preference.”

The Poop on the Coop: Why Care about Pigeons?

Pigeons were domesticated at least 3,000 to 5,000 years ago in the Mediterranean region, and “there is some evidence they were used for ceremonial purposes in Egypt and elsewhere,” as well as a food source, Shapiro says. “It’s not entirely clear when the development of all these interesting traits we see today began.”

He says pigeons “show more variation and diversity [in traits] than any other bird species that we know of. Pigeons are a great example of a species we can use to understand which genes control some of these really interesting traits that we see in many other birds and animals.”

“Charles Darwin was a real pigeon aficionado, and he relied heavily on artificial selection in pigeons to describe how natural selection works in the wild,” says Shapiro. “He spends a lot of time in ‘On the Origin of Species’ discussing pigeons. So pigeons have an important place in the history of evolutionary thought.”

Shapiro notes that “a lot of the variation that we see in different species has to do with an animal’s ability to adapt to its environment. By understanding why some of these traits are so different in pigeons, we can potentially understand which genes are controlling some of these interesting traits in the wild, where these traits can help birds survive and reproduce.”

He adds: “A lot of different animals use exactly the same genes to build similar body structures. By finding genes that control these structures in pigeons, we hope to understand which genes underlie normal diversity in the wild, and possibly even normal and abnormal diversity in humans, including human disease.”

“Pigeons have been used for decades in studies of vision, learning, flight performance, parasites, cardiovascular disease, behavior and navigation,” Shapiro says. “A lot of these topics have direct relevance to human health, so pigeons can help us understand our own biology.”

“On average, people from one population or ‘race’ tend to be more similar genetically to one another than to those of another population,” says Lynn Jorde, chair of the University of Utah’s Department of Human Genetics. “But the race categories we use are quite imperfect and there is a lot of overlap genetically between populations. So there would be many instances in which a black person would be more similar to some white people than to other black people.”

Shapiro and colleagues used pigeon DNA “microsatellite markers” to group the pigeon breeds according to how similar they are. Genetic material came from pigeon blood samples collected at the Utah Pigeon Club’s 2008 and 2009 shows and the National Pigeon Association’s 2010 show in Salt Lake City. Also, 500 feather samples were collected at a pigeon show in Germany and another 1,000 were mailed to the researchers after they sent e-mails “to every pigeon club we could find on the Internet,” Shapiro says.

Armed with genetic data, the biologists found the pigeon breeds most logically divided into nine groups of closely related breeds: (1) pouters and croppers, (2) three breeds with manes or hoods, (3) and (4) two groups of tumblers and rollers, (5) owl breeds, (6) German toy breeds, (7) homing pigeons and breeds with wattles, (8) fantails, (9) free-living European pigeons and the Modena. Some other breeds are a mixture of several of these groups.

The study was funded by the Burroughs Wellcome Fund, the National Institutes of Health, the University of Utah and Onorio Catenacci, a Michigan pigeon breeder.

A low-resolution version of the video soundbites and B-roll may be viewed here: http://www.youtube.com/watch?v=fzaDW5G-zZU&feature=youtu.be

The University of Utah offers a satellite uplink service for live interviews or video feeds about this story. For more information, please visit: http://unews.utah.edu/broadcast-services